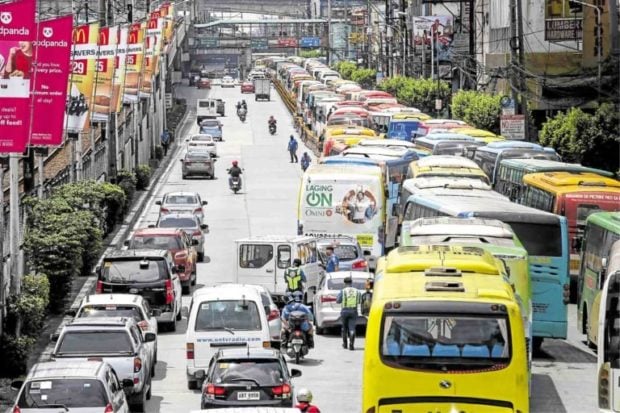 CRACKDOWN ON ERRANT DRIVERS The Metropolitan Manila Development Authority has recommended the suspension of the licenses of 100 bus drivers after they were found to have committed multiple traffic violations this year. —JAM STA ROSA

MANILA, Philippines — Due to the lack of coordination between the Land Transportation Office (LTO) and the Metropolitan Manila Development Authority (MMDA), scores of bus drivers with multiple traffic violations remain on the streets.

The MMDA made this admission on Tuesday as it announced that it would ask the LTO to suspend the licenses of around 100 bus drivers found with numerous traffic citations this year.

One of the drivers, whom the MMDA refused to identify, had reportedly been cited for traffic violations 533 times since 2006.

Based on records shown to media, he was issued a ticket 240 times for obstruction; 94 times for disregarding traffic signs, 47 times for illegal loading and unloading, and 42 times for violating the yellow lane policy, among others.

Speaking to reporters, MMDA general manager Jojo Garcia said the errant drivers posed a grave danger to the safety of passengers and should have their licenses suspended, if not revoked.

The agency earlier unearthed the records of 1,700 bus drivers with multiple violations, some dating back to 2004, which had accumulated because of the lack of a centralized database linking it to the LTO.

Garcia said that because of the sheer volume of citations they had to go through, they were forwarding first to the LTO the names of the 100 bus drivers with multiple violations this year.

“These drivers are consistent in their violations,” Garcia observed, adding: “It’s like they are being disrespectful of our traffic laws.”

Under Republic Act No. 4136, erring drivers with more than three citations should have their license suspended for a maximum of two years.

It was up to the LTO to decide if it would still run after bus drivers with multiple violations dating back to 2018 or earlier since the prescription period had already expired.
Valera, however, said that the maximum penalty ought to be the revocation of their licenses.

Garcia pointed to the lack of a centralized database as the reason why it took so long for the MMDA to discover the records of the 1,700 errant bus drivers.

He said that they were now working on digitizing their data to the LTO for better coordination. – By: Krixia Subingsubing