The cars and stars of “Ford v Ferrari” 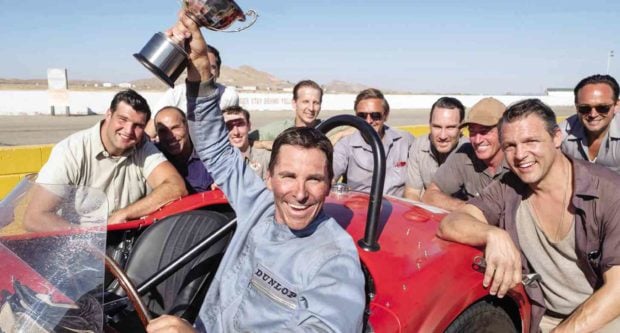 The movie Ford v Ferrari” wastes no time in putting you in the midst of the action. The film opens with Caroll Shelby’s fiery nighttime drive at Le Mans, the road coarse where the famed 24-Hour race is run every June. From there, it takes the viewer on an entertaining journey into the winner-take-all stakes of what is probably the world’s most difficult race. Enzo Ferrari rebuffs the offer of Henry Ford II to buy the Italian company, as Ferrari wants to retain full control of his racing program. Ford vows revenge by beating Ferrari at Le Mans, enlisting the help of Shelby (Matt Damon) and British driver Ken Miles (Christian Bale). Along the way, it weaves in corporate intrigue, personal vendettas, and the friendship and determination of two singular men in automotive history.

The harrowing race that opens “Ford v Ferrari” sees Caroll Shelby driving an Aston Martin DBR1. The DBR1 was born out of a new rule that allowed cars that were not road legal to contest sportscar racing. The DBR1 was based on the Aston Martin’s DB3S road car. The DBR1 was powered by a 2.5-liter straight-six engine rated at 252ps. Shelby wins the 1959 24 Hours of Le Mans with this car, making the DBR1 a highly collectible classic. A DBR1 was sold in 2017 for USD22.555 million, a world record for a British-made car.

It may seem unlikely that Shelby would be driving a German car in America, but then he did enjoy many fast cars of all makes. Director James Mangold (Logan, 3:10 to Yuma) chose the Porsche for one reason: it was reliable enough for repeated and prolonged takes. The 356 was Porsche’s first production car, succeeded by the 911. Originally sold for USD3750, 356s can now sell for more than USD800,000. 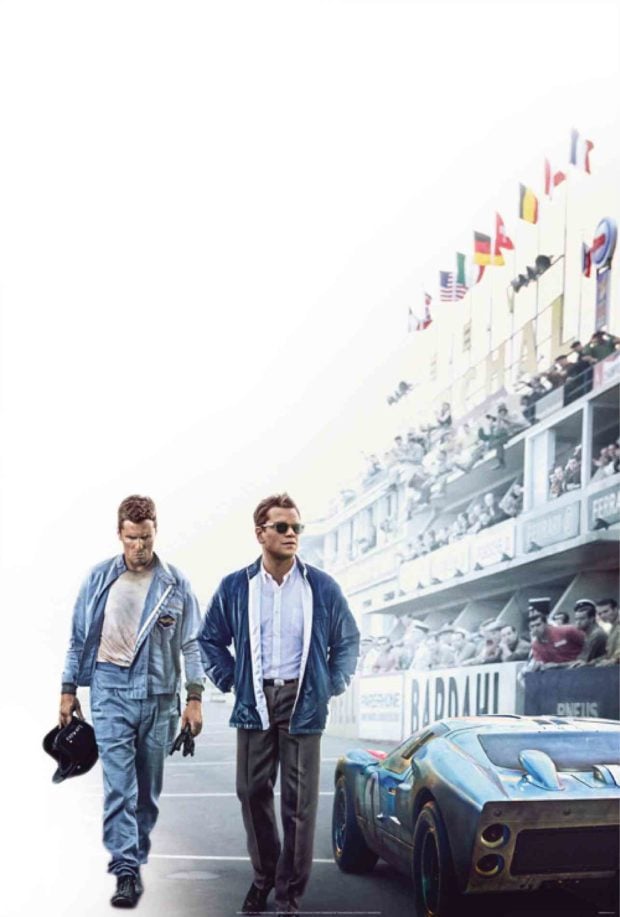 The car most closely associated with Shelby is the Cobra roadster. This car was originally known as the AC Ace, built in Britain. Starting in 1962, Shelby used the open two seater’s tube-frame chassis and plopped in a Ford V8. This made the AC Cobra the fast production car in the world. Superperformance International, based in South Africa, built the cars for the movie. The company builds the MKIII Cobras under license from Caroll Shelby Licensing, and you can own one just like the ones in the movie, starting at around USD99,000. You can even order a “Ken Miles” (Christian Bale) edition with a cracked windshield.

Ford’s weapon against Ferrari at Le Mans was the GT40. A purpose-built prototype face car, the car was built by Ford and Shelby to take on the Ferraris at the 24 hour race. The GT40 was powered by Ford’s 4.7-liter V8, later enlarged to a monstrous 7 liters. The car was an enormous success, winning its maiden race with Ken Miles behind the wheel. An original GT40 can be worth nearly USD10 million, so Superperformance, the license holder for the GT40 name and design, provided its replicas. You can own one yourself, for around USD190,000.

The beauty to the GT40’s beast, the Ferrari 330 P4 was powered by a V12 engine. The three-valves per cylinder design was based on those of the company’s Formula One cars, giving an output of 455ps. Only four were built. The Ferrari 250 GTO also makes an appearance in the movie.

The racing sequences were shot with courses in Georgia and California to stand in for locations in Florida and France. Aside from the film cars being painstakingly decorated to look like the original race cars, down to the Goodyear logos on the tires, the sets had to accurately depict the 1960s racing scenes. The film crew used a chassis they dubbed Frankenstein that weaved among the race cars. To get the sound of the racing engines, the film’s sound editor captured recordings of the originals. Watch the film in a theater with an accurate-and loud-system.

The driving scenes are at the heart of the film, and the character scenes in between are just as captivating. Matt Damon plays larger-than-life automotive Carroll Shelby. Shelby has to build a world-beating race car one on hand, and on the other, satisfy the corporate overlords at Ford. Jon Bernthal (The Punisher) plays Lee Iacocca, and Tracy Letts plays Henry Ford II, aka the Deuce. If you know some of the history of the Ford Motor Company, particularly regarding Henry Ford and his son Edsel, the scene where Ford takes his first ride in the GT40 is one of the most poignant in the film.

Christian Bale plays the British race car driver Ken Miles. Bale puts on his remarkable weight-dropping capability to use again, dropping about 35kg to go from playing Vice-President Dick Cheney, to the wiry Miles-by simply not eating. Bale took driving lessons at the Bondurant High Performance Driving School. Founder Bob Bondurant was himself a colleague of Miles and was mentioned in the film. Bale’s race instructor and the film’s stunt coordinator Robert Nagle said that Bale was hands down the best actor he’s trained. Consummate actor Bale gives Miles’ personality and mannerisms a life of their own.

What’s apparent is that everyone in the cast is just sheer having fun. If you’ve ever wondered what a fight scene between Jason Bourne and Batman would look like, “Ford v Ferrari” has the answer to that, too–just not the one that you might expect.