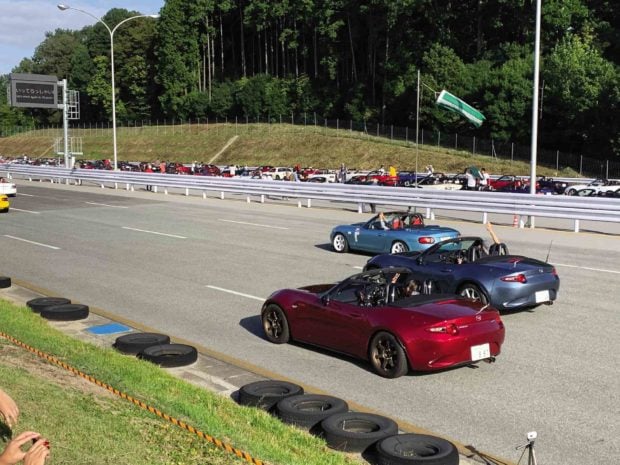 The Mazda Miata MX-5 is a global phenomenon: well-loved, respected and admired by almost all segments of car culture. It is a paragon of efficiency, lightweight, nimble handling, outstanding grip and a minimalist approach to capture the sheer romance of driving, where numbers and outright performance matter less than the sheer joy of being behind the wheel.

Over a million units of the MX-5 have been produced and sold worldwide, and the model recently celebrated its 30th Anniversary at Mazda’s Miyoshi Proving Grounds, near Mazda’s spiritual hometown, Hiroshima, in the western region of Chigoku, Honshu Island in Japan.

The Mazda Miata Club of the Philippines travelled en masse to celebrate this joyous occasion of all things Mazda Miata MX-5, in the spirit of fostering international camaraderie, at a time when the world is full of negativism. Bermaz Auto Philippines, the Philippine distributor for Mazda Vehicles, accompanied the club members and brought along select members of the motoring media to witness this historic occasion.

Thankfully, the massive typhoon which struck Western Japan, particularly in the Chiba and Tokyo Prefectures spared Hiroshima during the same weekend. We experienced extremely strong gusts of wind during our stay in Japan, making walking in certain places quite difficult, along with many upswept skirts, broken umbrellas, and people almost falling over. But we were spared the massive rains which flooded many parts of North Western Japan.

The Roadster Club of Japan is the organizer of the annual Anniversary event, with Mazda Motors Corporation simply providing the venue and a bit of logistical support and promotion. This 30th Anniversary get-together was a massive undertaking done by private individuals who all volunteered to make the event very successful, with no pay, nor thanks from anyone. It was, for the love of all things MX-5 Miata. It is this very spirit that makes the car and owning it truly special. In the days that followed, and in the succeeding week where we trooped back to Japan for the Tokyo Motor Show, we met many Japanese Mazda executives, both male and female, who own the Miata MX-5 because it is a truly enchanting, fascinating and alluring car to own. 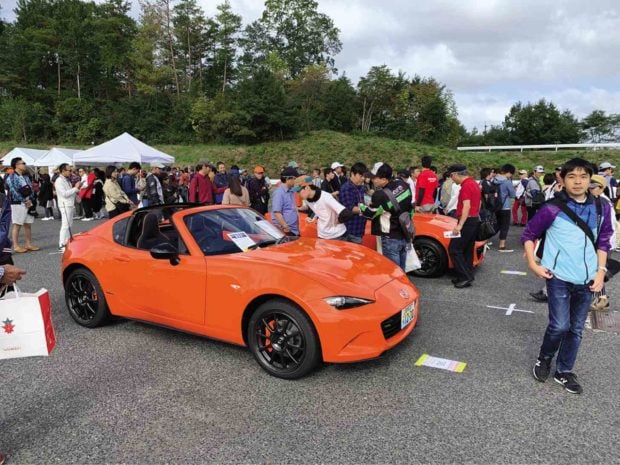 The gathering was ultimately a club-initiated event, with thousands of people attending this once in a lifetime milestone. Over 2,000 units of the Miata MX-5 (or Eunos Roadster, as they are known in Japan) were expected to attend, and in fact a claimed 2,300 units showed up at the Miyoshi Proving Ground, a large private testing facility owned by Mazda Motors Corporation located north of Hiroshima, roughly 84 kilometers away. Situated in the sleepy idyllic town of Miyoshi in the Tokushima Prefecture, the proving ground is designed to simulate real-world driving conditions worldwide with a variety of road surfaces. The Miata MX-5s present at the event were parked on Miyoshi’s high-speed oval and stretched for well over a kilometer, four to eight cars abreast. Many of the MX-5 owners were of the older, more mature variety, but that didn’t mean they were less enthusiastic and excitable about all things Miata MX-5!

The paddock area in the middle of the proving ground was set up to showcase select models of highly tuned examples of the NA, NB, NC and ND generation MX-5’s. Food and merchandise booths were set-up, and enthusiasts and fans alike swamped the tents, buying various Mazda memorabilia, toys, t-shirts and more. And as is typical of any matsuri (festival in Japanese), various food stalls were serving traditional street food unique to the region. On display were some important Miata MX-5 models, such as the MX-5 NA-generation Mazdaspeed Clubracer brought in from the USA, the Miata MX-5 ND that was the millionth Miata MX-5 ever made, and a special ND generation MX-5, where all guests were welcomed to write down their names on the car.

At the far end of the paddock was a stage which the organizers set up to give a short variety show and welcome all the foreign guests registered as guests of the event. People from Europe, Australia, New Zealand, and all over Asia came to show their love and support for the Miata MX-5, make new friends and exchange notes, numbers, stickers and club t-shirts as a sign of unity and camaraderie. The Roadster Club of Japan also invited some Mazda executives who were part of the development team behind the Miata MX-5 to give a short speech about their experience in developing the vehicle. 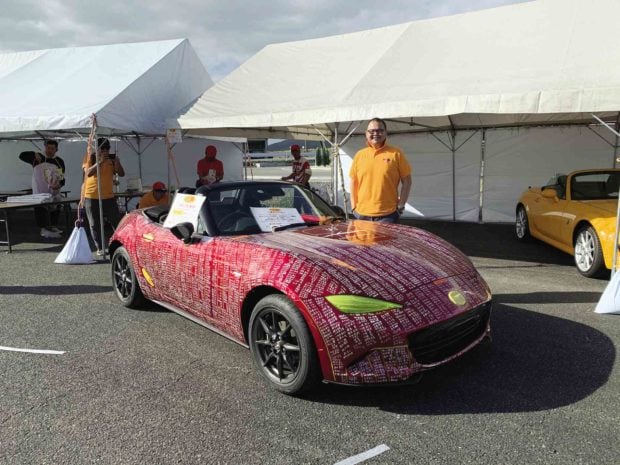 The culmination of the event was a parade lap of all 2,300 Mazda Miata MX-5s around Miyoshi’s high-speed oval, albeit in a very slow and controlled pace. By 2 p.m., the parade lap started and an endless stream of Miata MX-5’s drove past the adoring crowd of well-wishers and revelers. It was truly, a momentous and magical moment.

The next scheduled major gathering will be in 10 years, when the beloved Mazda Miata MX-5 Roadster celebrates its 40th anniversary. In the meantime, the Roadster Club of Japan hosts the annual Miata MX-5 Anniversary get-togethers in Karuizawa in the Nagano Prefecture, closer to Tokyo. Hopefully we get invited to these smaller events in the coming years, too! 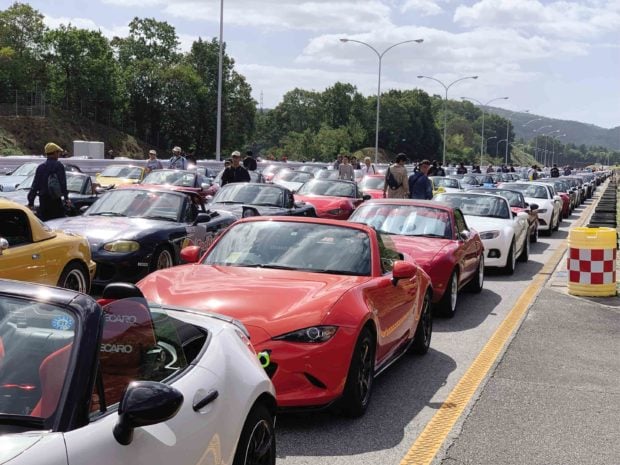