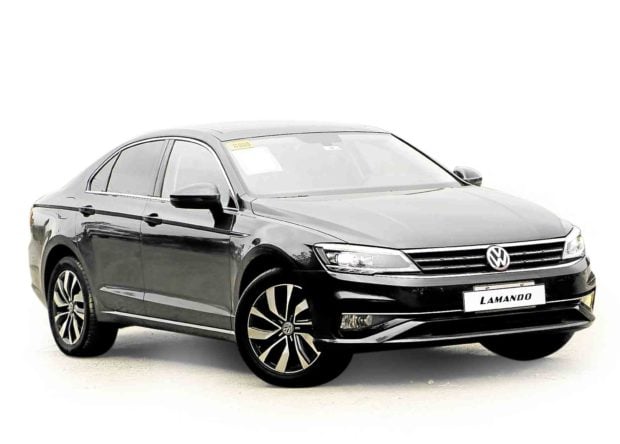 A weekday road trip to Baguio is always a welcome respite from the hustle and bustle of holiday traffic specially on an early December week. The trip was organized by Volkswagen Philippines and they invited some members of the Motoring beat to try out their flagship Lamando sedan with food and art as the central theme of the trip. The choice was obvious, Baguio City has always been Volkwagen country. The City of Pines has been endeared to the brand eversince the aircooled Beetle and Combi vans hit the Philippine roads back in the 1960s. The love of VW’s has not waned since then in Baguio. Local car shows continue to be filled-up with classic VWs and there’s always one or two of these on the twisty and hills roads of Baguio.

The overnight drive started off at the VW Quezon Avenue showroom and for the drive up North, we used the Asin-Nangalisan-San Pascual Road, also known as the Baguio Tubao Road or just simply the Asin Road. The tight twisty uphill roads made it also ideal for the group to experience the road handling capabilities and ride quality of the Lamando.

The Volkswagen Lamando made its local debut in 2018 and is a very capable and solid executive sedan. Powered by a turbocharged 1.4-liter 4-cylinder 280 TSI (Turbocharged Stratified Injection) gasoline engine with BlueMotion Technology and mated with a 7-speed direct shift gear (DSG) transmission which combines the convenience of an automatic and the fuel-efficiency of a manual. Horsepower is rated with a maximum power output of 148 hp at 5,000 rpm and maximum torque of 250 Nm at 1,750 to 3,000 rpm.

The road trip was designed for the drivers to test not only the car’s suspension, and handling and driving performance, but the drive allowed the participants to try out the Adaptive Cruise Control (available only on the SEL variant) on the three expressways (North Luzon, Subic-Clark-Tarlac, and Tarlac-Pangasinan-La Union). The vehicle automatically adjusts its speed without the driver stepping on the gas pedal at a controlled distance with the vehicle in front, which gives a bigger margin of safety when cruising the highway. The Lamando comes with a McPherson independent suspension in front and a rear four-link independent suspension making the ride solid and took the potholes and bad roads quite well. 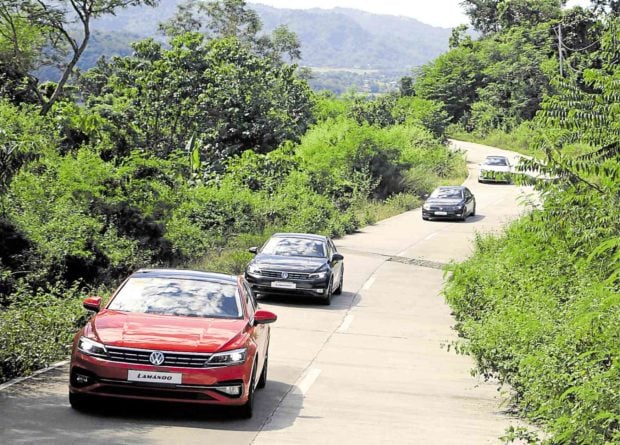 The VW Lamando units proved very capable on the hilly and twisty backroads of Baguio.

Legroom specially on the rear seats was more than adequate and leather seats was supple and felt very premium, which felt good on the 4-hour road trip. What’s also attractive is the 9.2-inch infotainment touchscreen monitor and 8-speaker system and the 10.2-inch Active Info Display cockpit giving the driver all the driving stats and info he needs at a glance. Its 2-zone climatronic airconditioning gave independent temperature settings for the two front passengers, making in cabin room comfort much more manageable specially in summer. 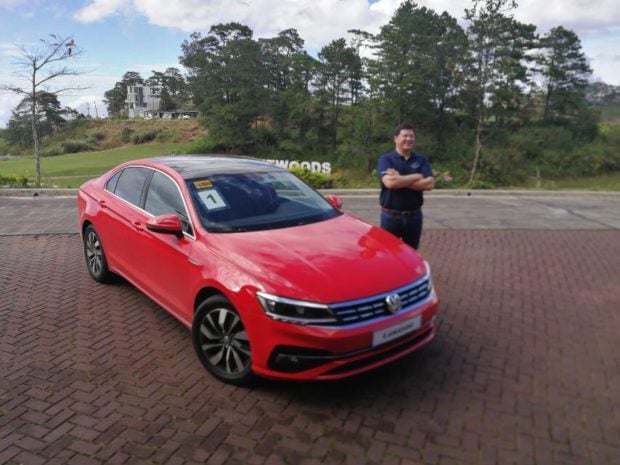 Our first stop was the Pinewoods Golf Course, one of Baguio’s gems that opened on December 2014. This 18 hole championship golf course is luxuriously located on the cool high mountaintops. The lush green fairways served as a beautiful backdrop for our test vehicles.

During the trip, VW Philippines announced its support for Baguio artists with an art competition, with the group driving to Pinsao Proper to visit the Tam-Awan Art Village where the group met some talented Baguio artists who used indigenous aesthetics and Cordilleran craftsmanship to create artworks depicting their love for the Volkswagen vehicles including the iconic Beetle. Dubbed as the Volkswagen Lamando Art Competition, it was organized in support of local artists and seen to enrich the Cordillera culture even more. The contest is open to all artists and the awarding ceremony will be held in the first quarter of 2020.

One notable artist present there was Jordan Mang-osan, a local artist known for his pyrography artworks using soldering irons and large magnifying lenses to etch his art pieces. Mang-osan is also a VW lover, seen by some of his solar-powered etches depicting his favorite VW’s. It was also on the same occasion that Architect Roland Cruz announced the opening of a Volkswagen museum in Tam-awan this coming February. His exhibits will showcase anecdotes on how vehicles became part of our political and social history from the 1940s to the present.

The culinary highlights of the trip included a visit to Chef Vicky Clemente’s Mama’s Table for dinner, and lunch the following day at Chef Sau Del Rosario’s Café Fleur who prepared their signature dishes at their popular dining establishments in Baguio City and Pampanga respectively. 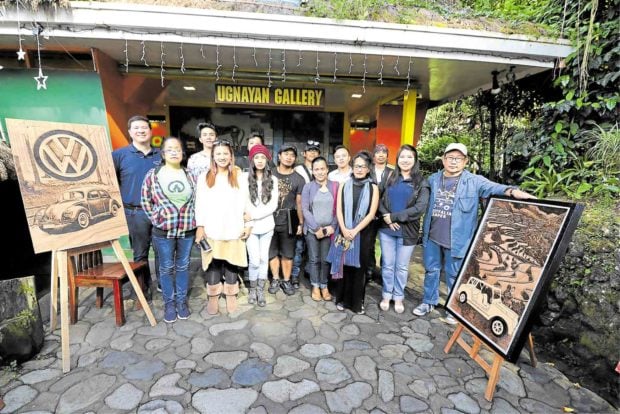