Lamborghini’s bullish future with the Urus 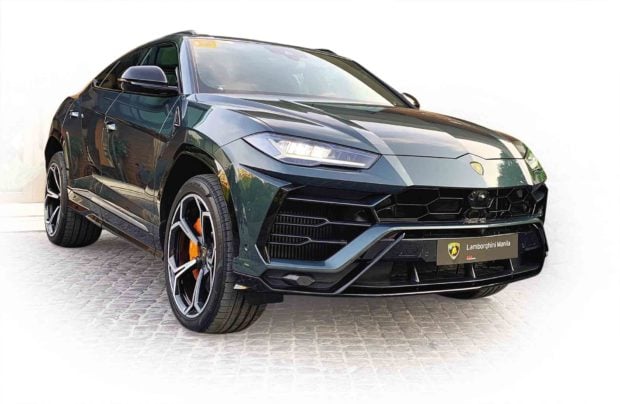 In my 15 years of being a motoring scribe, I’ve had the pleasure of taking home some of the best cars I could only ever hope to afford. A few of them include the Porsche Panamera Turbo, an Aston Martin V12 Vantage S, and a Ferrari F488. The latest addition to this list of super expensive and mega-fast cars is the latest creation from Sant ’Agata Bolognese, the Lamborghini Urus, the world’s fastest accelerating production SUV. It’s also the most expensive vehicle I’ve had the pleasure to bring home, and surprisingly, the one car you can do almost anything you wanted to with: light to medium off-road trails, overlanding, driving through traffic and long-distance touring, the Urus can do it all. 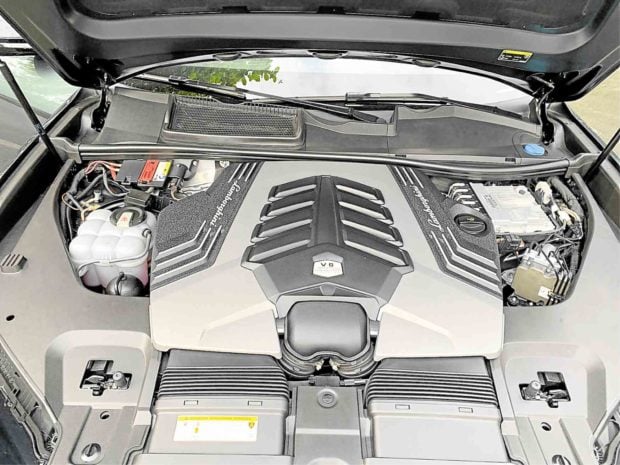 The base chassis is shared with the Audi Q8, Porsche Cayenne Coupe, and the Bentley Bentayga, but the Urus, whose name is derived from the ancestors of the modern cattle in Italy, is the lightest of the group, weighing in under 2,200kg. This is achieved through the extensive use of carbon-fiber and other special composite materials, aluminum and more. The exterior is all Lamborghini, with huge slats, strakes, and angry aggressive curves taking cues from the Aventador and Huracan. The doors in particular feature a frameless window design, unique in this segment.

The Urus is the Italian brand’s first turbocharged model as well, fitted with Audi’s 4.0 liter bi-turbo V8 engine. Thanks to special cylinder heads, different turbochargers and unique ECU tuning, the Urus has 99 hp and 80 Newton-Meters of torque more than the Porsche Cayenne. The total output is a mind-boggling 641 hp and 850 Newton-Meters of torque, truly in the supercar level of performance. The engine itself is no slouch in base form, as Audi developed this powertrain after a similar layout was used and successfully won multiple times at the Le Mans 24 Hour race with the Audi LMP Racing Team a few years prior, before the brand switched to hybrid diesel engines. Thus despite its SUV appearance, the Urus can accelerate from rest to 100km/h in 3.6 seconds, to 200km/h in 12.8 seconds, and reach a top speed of 305km/h. 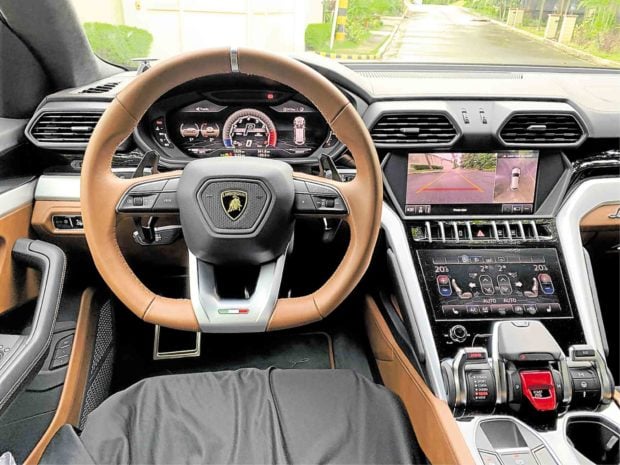 The transmission is the familiar 8-speed ZF with all-wheel drive, allowing as much as 87 percent power to the rear wheels, or 70 percent to the front axle depending on driving conditions. In default mode, the front-rear torque bias is 40:60, giving the Urus a RWD feel but with the confidence and stability of all-wheel drive. Rear-wheel steering is also standard, giving the Urus impressive maneuverability. With a total of 250mm of ground clearance form its dynamic active air suspension, the Urus, when fitted with the proper tires, can also excel off-road. The ANIMA Drive Mode Selector has a total of six pre-set modes, three for paved surface driving (STRADA, SPORT and CORSA), and three off-road modes (NEVE, TERRA and SABIA), plus a special custom mode called EGO which allows you to mix and match the settings for the engine, transmission, steering and suspension.

The brakes are also awe- inspiring: featuring the largest carbon-ceramic brake discs fitted to a regular production car at 440mm for the fronts and 370mm for the rears from Brembo, they are clamped on by 10-piston front calipers and single sliding piston calipers for the rear. When cold, there’s a bit of a numb sensation, turning from no feel to suddenly grabby, but as the carbon discs and pads warm up, feel, feedback and modulation improve, allowing this beast to stop on a dime with no fade or drama, consistently. Massive 22-inch wheels and tires with Pirelli HT high performance tires take up the rolling stock. 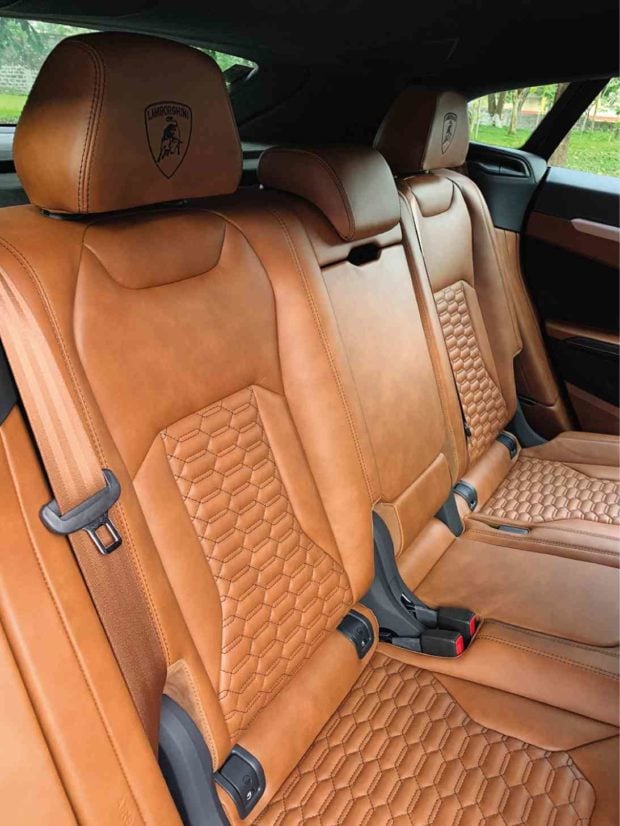 Step inside and the Urus feels special: soft saddle brown leather contrasts with the exterior’s dark metallic green hue. Intricate geometric stitching piping on soft, pliant materials welcome you. There are so many nice, nifty details too, like the grills on the A/C vents, the machined shapes on the speaker covers and the melding and contrasting of saddle brown, machined aluminum and black, flow naturally. It all feels like a proper Lamborghini rather than a simple cut-and-shut rebadge. The dash architecture is reminiscent of the Aventador and Huracan, the 3-spoke steering wheel with paddle shifters straight out of a race car, the ANIMA system looks like an airplane’s throttle lever, and the large main instrument cluster is an LCD display, much like Audi’s Virtual Cockpit system with switchable viewing modes to suit driver preference. A powerful Bang and Olufsen surround sound system has been optioned on this particular Urus and with Apple Carplay, streams my mobile music beautifully. 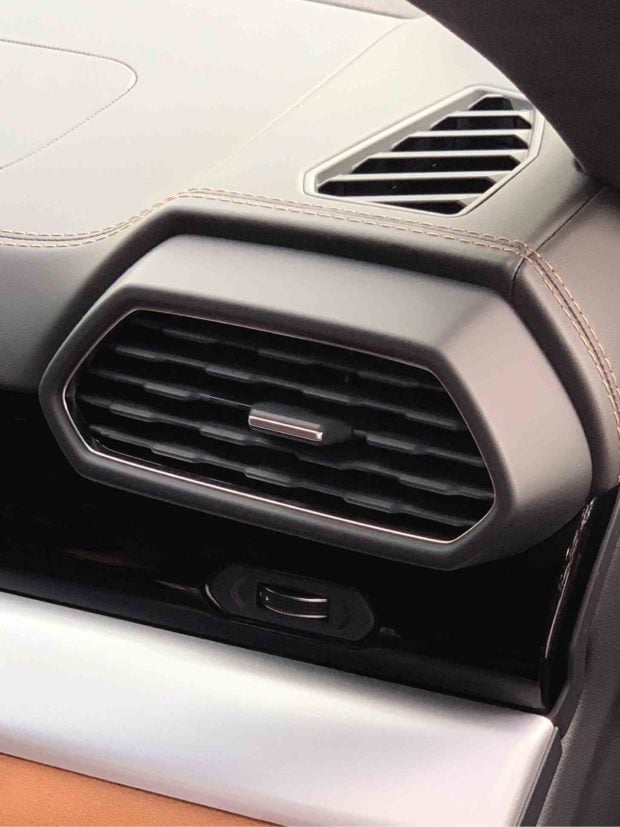 On the road, the Urus drives very impressively. Stick it into the ECO mode and the Urus drives like an Audi Q8, perfect for when you just want to press on with no drama. Comfortable, refined and composed. It’s just that everyone gawks and stares at you, so you better be an attention-seeking junkie. Shy and retiring types move away now. In ECO mode, it returned a very decent 7.8 kilometers per liter on a long drive to and from Tagaytay with moderate traffic all the way. If you want to hear that V8 burble, slot it into SPORT or CORSA mode, gun the throttle, and the angry guttural exhaust noises that make car guys warm inside and fuzzy in the head, pour out beautifully from the quad exhaust tail pipes. There’s a bit of pops and bangs, too ,on the exhaust overrun coming from high revs, just like many modern sports and even race cars. The engine is torquey, responsive and very willing to rev to redline, you easily find yourself travelling 20% (if not more) FASTER than you intended to go; I panic a bit, step on the powerful brakes, and suddenly the Urus comes almost to a complete stop. Indeed, an intensive recalibration of your driving senses is required. Don’t even bother going flat out unless you’re on a race track: the Urus will land you in jail just as quickly! Coming down Tagaytay, the bi-turbo V8’s punch, mated to the responsive 8-speed auto makes overtaking a breeze. The brakes are confidence inspiring, the powerful LED headlights light up the way ahead allowing you to stay on the throttle longer, and brake later. The active air suspension swallows large bumps and undulations on the road, and has enough compliance to give you confidence to press on over poorly surfaced roads, as well as corner at physics-bending speeds.

The Urus is indeed, the true total package. Perfect in almost 99 percent of all road and weather conditions. With an expected normalized 3,500 annual output for the Urus alone, Lamborghini will double total production output to roughly 7,500 in 2019, almost double from its 2017 production. No wonder the Milanese brand is truly bullish about its future.