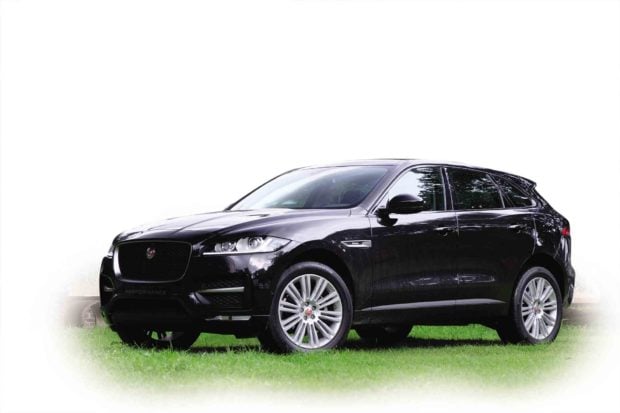 I first saw the Jaguar F-Pace in Production spec at the Paris Motorshow 2016 over three years ago, and though I’m not a huge Jaguar fan, I knew this model would be an important and significant addition to the struggling brand. I was correct on one count: in 2016, in the F-Pace’s first year of sales, it sold 46,000 models worldwide, making it the best-selling model for the brand. When your competitors include the Audi Q5, BMW X3, Lexus RX, the Volvo XC60 and even the Porsche Macan, that’s quite an achievement. With Jaguar touting the F-Pace as “the world’s most practical sports car,” it is in fact more like a sports saloon on stilts, and its dynamism and responsiveness shows. Since then, I’ve been itching to get behind the wheel of this fab Jag.

The F-Pace is built atop the JLR platform’s D7A aluminum-intensive platform which also underpins the Jaguar XE, XF, and the Range Rover Velar. Power comes from a choice of two Ingenium 4-cylinder turbocharged gasoline or diesel engines, and supercharged V6 in two trims (335hp and 375hp) and a mad supercharged V8 with a bonkers 542hp in SVR trim. Here in the Philippines, we get the more sensible diesel variant with 178hp and 430 Newton-Meters of torque mated to the ZF 8-speed automatic transmission driving all four wheels. The engine is smooth, quiet and refined, well-matched to the smooth shifting automatic transmission. Floor it, and punchy upshifts are met with relentless acceleration thanks to impressive torque from the Ingenium family of 4-cylinder diesel engines. Fuel efficiency came in at around 9.5km/liter in the city when I had it a few months back with less traffic than what we’re experiencing during this holiday rush. On the highway, the F-Pace returned a very impressive 15.5km/liter cruising at the speed limit. Top speed is a claimed 200km/h with a zero-100km/h acceleration time taking 8.4 seconds. The in-gear acceleration however, is truly manic thanks to the tremendous torque and the eight forward gears: it feels faster than it actually is, which adds a degree of charm and entertainment with the Jaguar.

The interior is beautifully made in combination red and black leather with red stitching, reminding you of Paul Smith’s latest fashion line-up being chic and classy with a bit of funk. You sit feeling rather low inside as the F-Pace’s belt-line is quite high, the interior wrapping around you intimately. There’s more than adequate room inside, but you never feel that it’s roomy, airy and spacious like say, an Audi or Lexus, nor is it a technological tour de force like a Merc, but it feels unique and different, where British designers allowed good taste and aesthetics to reign rather than simply overwhelming its occupants with tech and trends. The Meridian hi-fi 11-speaker surround system does offer Bluetooth telephony/connectivity and played my MP3 files pretty well, but I miss the Apple Carplay found in newer German rivals. It is intuitive to use, but is slow to boot up on start-up.

It rides on 20-inch wheels shod with 255/40R20 high-performance HT tires from Continental and the suspension is firm but pliant and sporty enough despite the massive wheels on our poorly surfaced roads. The boot is one of the biggest in its class, offering 650 liters of cargo space with the rear seats up, and a shade under 1800 liters with the rear seats folded down, making the F-Pace truly versatile in terms of cargo carrying and hauling. There’s a 203mm ground clearance, enough to tackle most curbs and light off-road trails going to one’s manor, and a 25.5 approach angle and 25.7 departure angle. More aggressive all-terrain tires should improve the F-Pace’s mud crawling capabilities along with its simplified off-road assistance terrain management software system borrowed from corporate sibling Land Rover. It’s also got a tight 5.8 meter turning radius, coupled with a 525mm flood fording depth making it practical and useful in our tight and flood-prone city streets.

On the highway, the F-Pace is relentless as it eats up motorway miles with ease and confidence. The NHV refinement is excellent, and the Jaguar exhibits high-speed stability one would expect from a proper intercontinental tourer. On winding roads, the F-Pace also excels as British b-roads are even tighter, narrower, more heavily crowned and slipperier than our roads. There’s a feeling of lightness, and at the same time delicacy on the steering, allowing you to tread carefully yet confidently at speed. Jaguar has resisted building an SUV, leaving that to its Land Rover kin, but with the majority of the world, especially China and other emerging markets wanting for a comfortable yet luxurious crossover, the transition from sports sedan to sporty cross-over is successful for the leaping cat.

Overall, the F-Pace is a great car that has uniqueness and rarity on its side. It lacks the heft and feel of a typical German car, or the high-tech allure of a Lexus, but these very traits would have made the Jaguar less British, more generic. The Jaguar F-Pace is a crossover luxury ’ute for those seeking something luxurious and different from the norm.