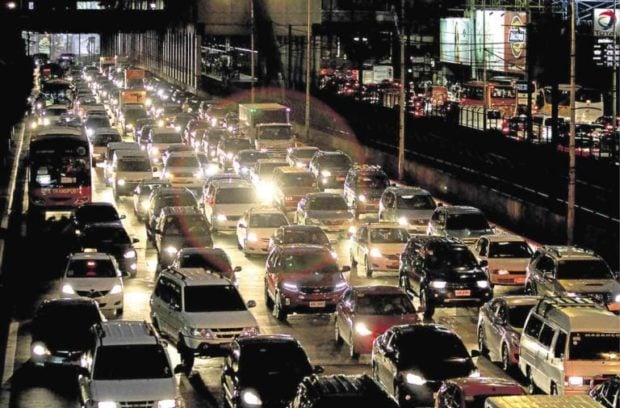 Villar promised that 2020 would be the “turning point” in the fight against traffic, which costs the economy some P3.5 billion a day in Metro Manila alone, according to the Japan International Cooperation Agency.

“That’s a one-two punch,” Villar said, adding that the projects would help reduce volume on Edsa—Metro Manila’s main thoroughfare and a symbol of urban congestion in the country—by 20 to 30 percent this year.

The Skyway Stage 3, which stretches almost 19 kilometers, will link the North and South Luzon Expressways via an elevated expressway. The Harbor Link extension involves the opening of the exit ramp to R-10, providing better access to Manila’s busy port area.

Manila also maintained its status as the worst city to drive compared to other congested metropolises such as Jakarta and Bogota, Bloomberg noted.

The Metropolitan Manila Development Authority, a planning and regulatory agency, did not dispute the report.

Villar said the goal was to increase the average speed on Edsa to around 40 kilometers an hour by 2021.

He added that the government’s Metro Manila traffic plans through next year, which mainly involved private-sector tollroads and government-funded bridges, would help restore Edsa to its original capacity of 240,000 vehicles a day.

The thoroughfare handled more than 385,000 vehicles a day last year, the MMDA had previously estimated.

Villar said other ongoing projects that could help ease traffic on Edsa were the new Estrella-Pantaleon bridge connecting Makati and Mandaluyong and the Bonifacio Global City-Ortigas Center Link Road Project.

Metro Pacific’s north-south elevated tollroad known as the NLEx Connector project will also be completed by 2021. Moreover, the company’s C-5 South Link Expressway, which will run from Metro Pacific’s Cavite Expressway through C-5, will open by the end of next year. INQ