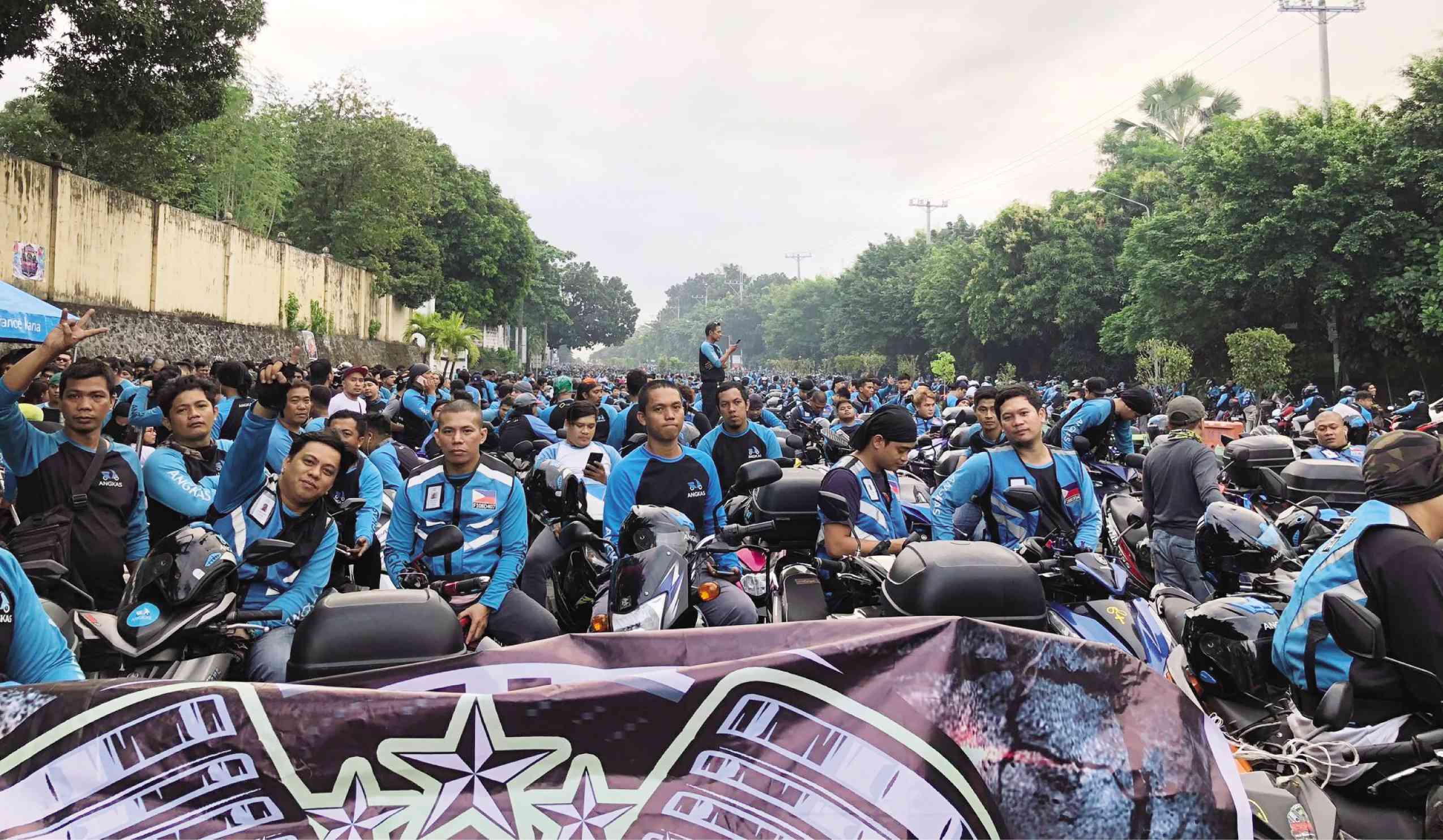 Despite all these, however, the road to legitimacy for these motorcycle taxi services has been bumpy and full of twists and turns.

The circumstances leading to the Jan. 20 Senate committee hearing on motorcycle taxis was like a roller coaster ride. Prior to the hearing, the Department of Transportation’s technical working group (TWG) announced it was terminating the motorcycle taxi pilot test run, and that beginning next week, arrests would be made on those persisting with the business. Immediately after that announcement, Sen. Grace Poe stressed, “The Senate (will) continue with its hearing to expedite the passage of the law allowing motorcycle taxis.”

On Jan. 21, Antonio Gardiola Jr, TWG chairman and board member of the Land Transportation Franchising and Regulatory Board (LTFRB), announced a turnaround: The pilot run on motorcycle taxis would continue. It was reported that Gardiola made the turnaround after learning the senators’ sentiments during the hearing. Poe had said, during the Monday hearing, that she would “encourage private citizens and the stakeholders to file a case against the Department if they fail to continue with the study because the study is crucial for the data to be submitted to Congress so that we can base our bills, we can base our law on the proper results of the study.”

In an interview at DZMM after the hearing, Poe further explained, “The reason why we are considering motorcycle taxis is the struggle for an efficient public transportation. MRT is not yet 100-percent rehabilitated, the LRT extension is not yet finished, while the Metro Manila subways have not started yet. When all these are already working, commuters don’t need to entirely depend on alternative modes of transportation.”

In a statement sent to Inquirer Motoring, Poe said that “the continuation of the pilot operation of motorcycle taxis is a triumph for commuters in need of alternative mode of transportation. Traffic congestion and the rising demand for mobility are pressing reasons for us to consider regulating the motorcycle taxi industry. We hope the concerned agencies will devote adequate time and effort to thoroughly study its viability and safety, and come up with a comprehensive report that could aid Congress in legislating appropriate law.”

The decades-old Republic Act 4136 (Land Transportation and Traffic Code) specifically Section 7(c) states that “private motorcycles, scooters, or motor wheel attachments […] shall not be used for hire under any circumstances, and shall not be used to solicit, accept, or be used to transport passengers or freight for pay.” There have been calls to amend this Republic Act. The pilot test would determine whether motorbikes, when subjected to strict regulation and professional standards, could be used as a safe public transport.

Public demand, it seems, has done away with this old law. Transportation Assistant Secretary Alberto Suansing told this writer yesterday: “From Aparri down to Sulu, my guesstimate is there are 200,000 motorcycle riders involved in motorcycle taxihabal-habal, either as full time or part time.” (Habal-habal is a Visayan term referring to cramming as many passengers and cargo in a motorcycle taxi). 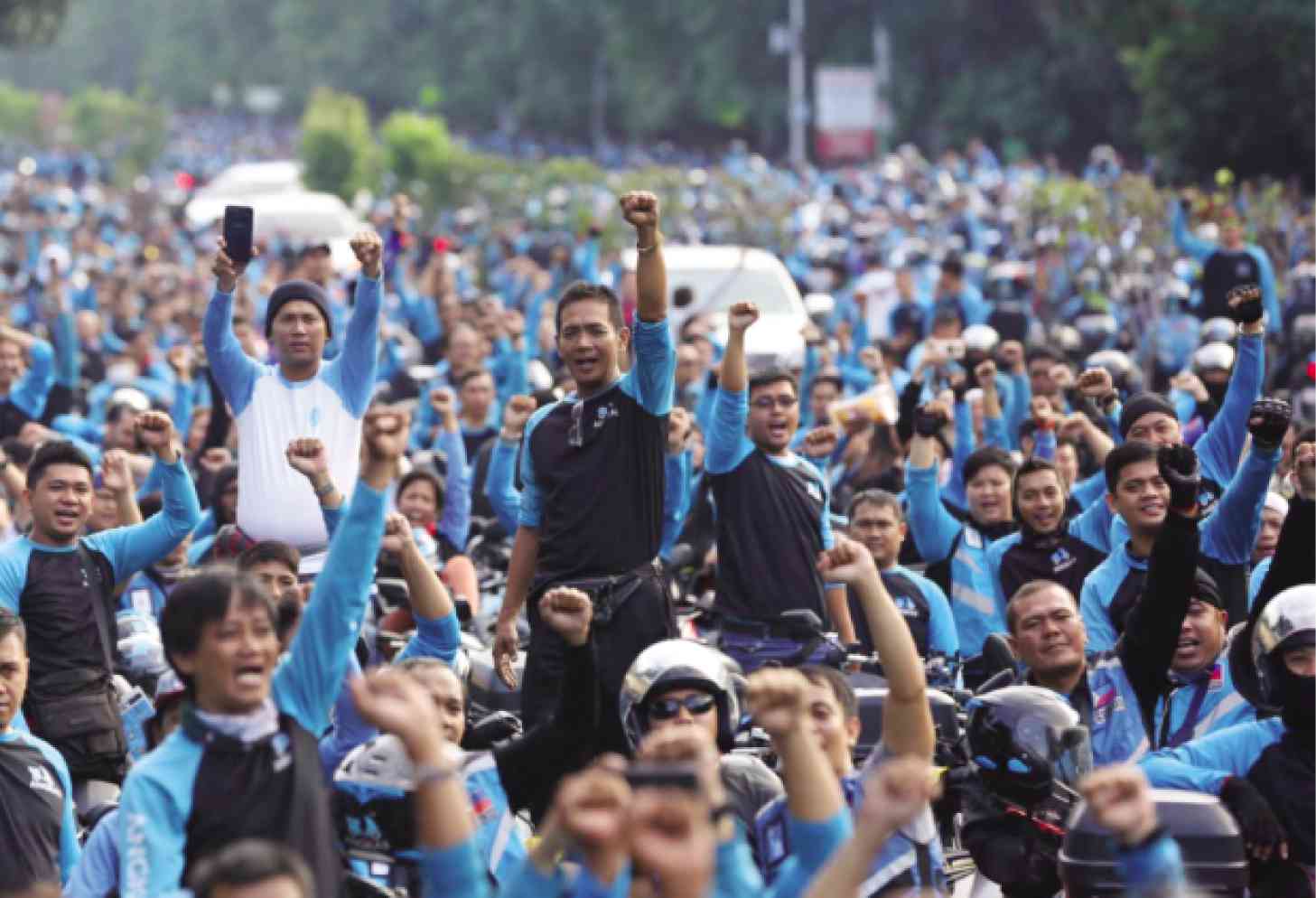 Thus, it’s not surprising for the riding public to think that, even if motorcycle taxis become outlawed, they would still proliferate. The habal-habal is the best argument for it.

“I’m happy that the government will not terminate Angkas and other motorcycle taxis. I hope the DOTr will think of the importance of Angkas because it is the reason why we get to our work on time. Even if the government decides later on to remove motorcycle taxis, I will still ride motorcycles or habal-habal for our work and our family,” said Ronel Mendoza, 39, a multimedia content provider.

Mendoza is a regular passenger of Angkas, Grab, and other taxis. He has a motorcycle at home but his wife uses it to take the kids to school.

Mendoza said he has been riding Angkas “almost everyday.”

“I use Angkas to avoid traffic jams, I also use it because it is more affordable than taxis. I don’t think it’s risky to ride motorcycle taxis because drivers are professional,” said Mendoza.

Cam Arcilla, 28, a public and media relations specialist of a Makati-based company, rides Angkas because it is “convenient and it saves me from traffic, especially when I’m in a rush or if I’m running late.” However, should motorcycle taxis be outlawed, she said she would no longer ride them.

Arcilla said she commutes to work everyday. She usually takes the UV Express, but when she’s running late for work, she said Angkas is her best option.

“I ride Angkas because I trust its service, not because I want to ride a motorcycle going to work. The illegal ones don’t assure safety and convenience,” Arcilla said.

“I haven’t had a ride with Angkas that had become problematic. What I like about them is that their drivers ensure safety to their passengers. They always ask first and foremost if they want to use a facemask or showercap (for the helmet provided by the motorcycle-for-hire) for hygienic purposes, and they even ask if it’s your first time to ride with them so they would adjust how they drive.

“It’s really disappointing how DOTr cuts down options for commuters without actually providing ways to resolve the traffic. Even if there is, we can’t see it or it doesn’t even work. There’s still traffic. Everyday,” stressed Arcilla.