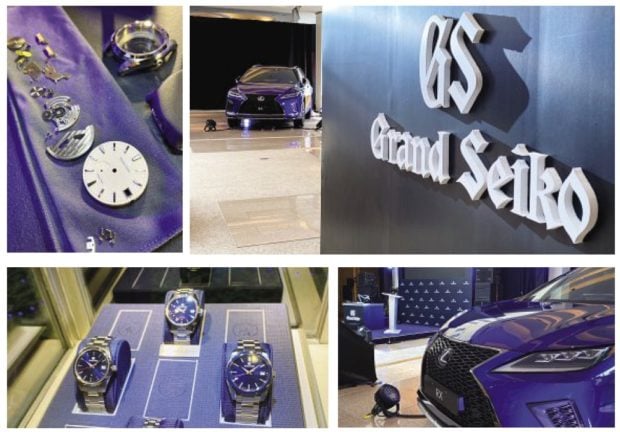 The thoughtfully crafted showroom of Lexus in Bonifacio Global City was, as it always is, full of wonderful examples of Japanese artistry, precision engineering, robustness and reliability. The difference, though, is that there was only one vehicle on the floor. A lone RX F-Sport looked on, yet was completely at home. It watched over others it had welcomed into its space. Beside it, a calligrapher was patiently teaching interested guests how to calm their souls and use a brush and ink to express themselves. Across the room was a somewhat small table with even smaller objects, with a special camera projecting the work of yet more highly precise hands for those around to see.

The evening, hosted by Lexus in their BGC Showroom, was for Grand Seiko. On hand were guests and enthusiasts from the car company, the watch company and the horological world itself. There was quite a bit of interest for this much-awaited event, on this 60th year of the Japanese watch company Seiko. Most especially because several special edition watches were announced globally only the day before in Japan. Guests were extremely surprised to see the full set of these new releases on hand, and able to be seen and touched and fitted. Delivery though won’t be until later in the quarter, for those that already purchased the special pieces.

This being Grand Seiko, though, all the pieces were special. The company and the craftsmen therein take pride in producing watches that combine a unique vision of beauty and luxury with a rock-solid reputation for reliability. Perfectly in tune with the venue, actually. Quite interestingly, it was a bejeweled ladies watch that attracted quite a bit of attention from some of the guests, with the combination of the Japanese aesthetic and reasonable pricing, attracting them to a brand they previously would not have considered.

The man at the small table was Master Craftsman Takuya Nishinaka, demonstrating the intricacies of the Grand Seiko movement, and giving guests the chance to see up close the level of both mechanical precision and human artistry that goes into the watch movements themselves. Nishinaka-san is the person responsible for choosing and training the upcoming watchmakers and craftsmen of the brand, and it was clear that the future is in good hands. On his wrist was, as he said proudly, the first Grand Seiko model ever produced. He was quite happy to chat with Calibre guests who brought along their own sample of the same, as well as some key pieces that helped shape the beginnings of Grand Seiko itself. Also happy to explain the past, present and future of Grand Seiko was director and SVP of Seiko Watch Corp. Yoshikatsu Kawada, who by the way was wearing a current model Grand Seiko with Arabic numerals. The friendly and quite knowledgeable Kawada-san discussed how well the brand was expanding, listening to old-school fans while also paying attention to the increasing number of new enthusiasts.

Timeplus president Karl Emmanuel Dy welcomed friends and guests to this first big watch event of the year, and promised much activity and announcement over the next 12 months as they, Official Distributor for Seiko Watch Corp. in the Philippines, bring the Grand Seiko brand to more fans and enthusiasts. Also on hand were SVP Raissa D. Yam and VP and Senior Digital Marketing Officer Edric Michael Dy, letting the guests place faces and names to the watches and, perhaps more importantly, promising increases access to the timepieces they desire.