The engines of tentpole summer-movie season are revving hard once again, as the trailer for “Fast & Furious 92 dropped over the weekend during the Super Bowl LIV (the one which Kansas City, in Missouri, not Kansas State, won). The trailer that rolled was just a teaser and not the full one, yet it was packed sidewall-to-sidewall with action, characters new and old, and, of course, family.

“Fast & Furious” main muscleman Vin Diesel is back behind the wheel of a muscle car, the circa 1970 Dodge Charger. Fans of the movie series will recall the Dodge Charger as his character Dominic Toretto’s first prominent car. That car had a giant supercharger sticking out of the hood, even though it wasn’t really functional but used to make the car more distinctive. The trailer has a Charger evading a huge truck that’s flipping and about to slam down onto the road. Also seen in the trailer is the modern version of the Dodge Charger SRT Hellcat. The standard Hellcat packs a supercharged 6.2-liter HEMI V8 engine churning up to 717 hp.

As per tradition, this “Fast & Furious” movie will lean heavily on the “family” theme. This time, Dom’s seemingly evil brother will be played by John Cena. Cena’s character is surely a crack driver as well. Returning as director is Justin Lin, who also helmed Fast 3 to 6. Lin has been busy, directing among others “Star Trek Beyond,” and he reportedly found just the right angle to make the film series more interesting for him: that of sibling rivalry. If we follow series tradition further, we will probably see Cena’s character join the main hero cast by the next movie. But for now, we can enjoy seeing the characters duel with Cena’s Ford Mustang bashing metal with Diesel’s Charger.

Lin was probably instrumental in bringing back fan favorite Sung Kang as Han Seoul-Oh. Death is not the end for any character in this series, as Han has appeared in series installments after his death was shown, via a diverging series timeline. Now, though, there will be another explanation for his escape from the grave. Just as well, as now we will be treated to Han driving the latest hot Japanese sports car, the Toyota GR Supra. 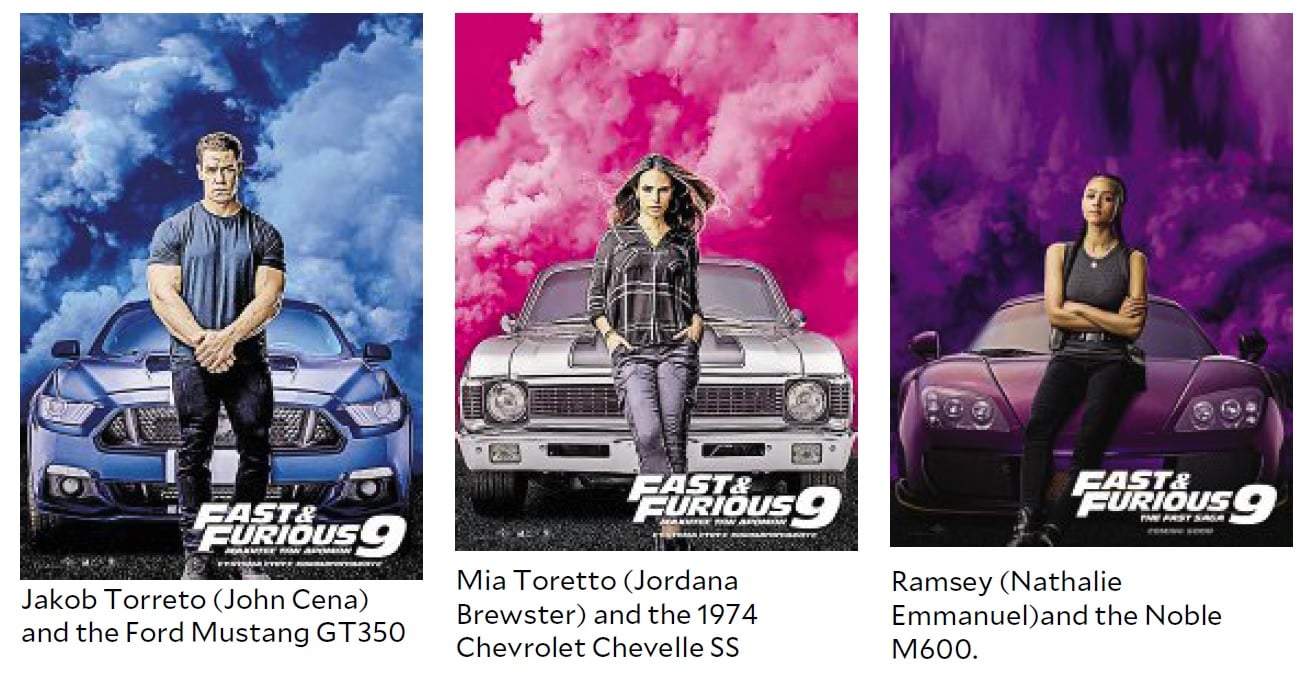 Tyrese Gibson will be taking the Jeep Gladiator where no car has gone before, crossing what seems to be a fallen log. The Indiana Jones-like action sequences continue with Diesel and Michelle Rodriguez taking a swing across a canyon in the Charger. As a final teaser, there’s the indelible image of a rocket-powered car, a series first. This isn’t some land-speed record car, though. It’s a Pontiac Fiero with a rocket strapped to its rear. Get ready for more outrageous and ludicrous (and Ludacris) scenes when the movie opens this summer.