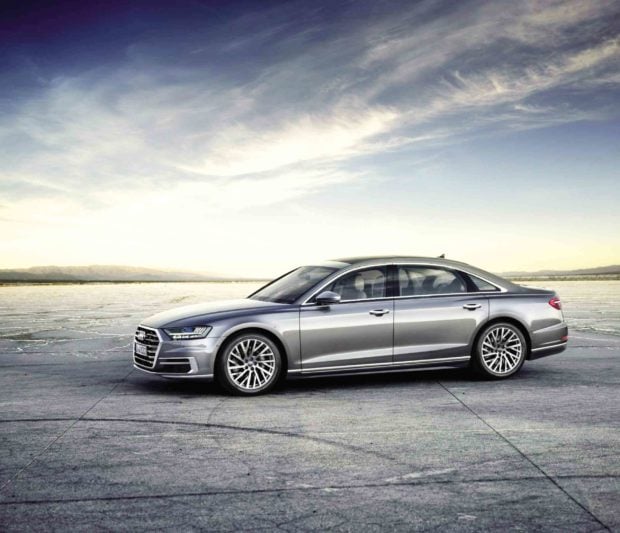 Guests of Makati Shangri-La, Manila now have the option of getting chauffeured around town in luxury vehicles as the hotel partners with Audi PH, which serves as premium mobility provider.

A multifaceted personality—this is what the new Audi A8 L presents as the brand’s flagship luxury sedan now rides on an intelligent predictive active suspension system. Depending on the chosen setting, this feature affords the full-size model the supreme ride comfort of a chauffeur-driven limousine or the firm handling of a sports car.

The Audi A8 L’s predictive active suspension is fully dynamic, relying on electromechanical actuators to adjust its settings. These actuators can lift up or force down each of the vehicle’s wheels individually to actively manage ride height in every situation. The active suspension can raise or lower the car’s body by up to 85 millimeters from its central position at all four corners within five-tenths of a second.

Allowing for this are compact electric motors located close to each of the Audi A8 L’s wheels, all of which operated by the car’s 48-volt primary electrical system and governed by power electronics. A belt drive and a compact harmonic drive step up the electric motor’s torque almost 200 times, or to 1,100 Nm, and apply this to a steel rotary tube. The latter is permanently attached to a preloaded titanium rod located inside it and capable of turning through more than 20 degrees. From the end of the rotary tube, the force is transmitted to the suspension via a lever and coupling rod. At the front it acts on the spring strut while at the rear it works on a transverse link.

The Audi A8 L’s predictive active suspension works together with a camera placed at the front of the car. With this, the system identifies uneven surfaces before these are reached and predictively regulates the active suspension. Even before the car hits a bump, the predictive function—developed in-house at Audi—signals the correct positioning travel to the actuators and actively adjusts the suspension. This reduces body movement and compensates for undulations or similar unevenness on roads. Plus, the complex process takes just a few milliseconds as the camera generates information about road surface properties 18 times a second. The electronic chassis platform processes the road surface data and precisely actuates all suspension components almost in real time. 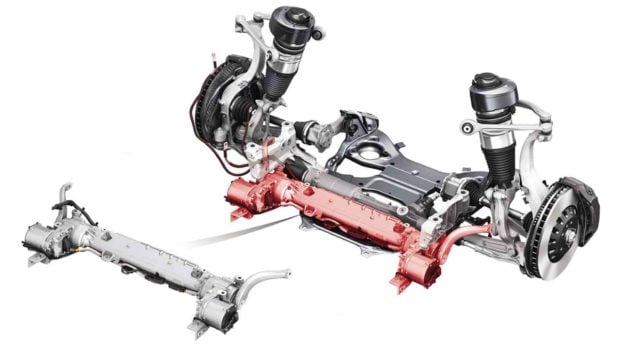 Included in the Audi A8 L’s predictive active suspension settings are “dynamic” and “comfort plus.” The feature works in conjunction with the car’s air suspension and the Audi drive select dynamic handling system. In “dynamic” the A8 L becomes a sports car as it turns in firmly, its body leaning over by only 2 degrees, instead of more than 5 degrees in standard setting, when cornering fast. The car’s front end rises or dives minimally during acceleration or braking, respectively.

In contrast, “comfort plus” profile, as chosen in Audi drive select, lets the luxury sedan glide with velvety smoothness over any bump and surface. The setting also offers transverse force reduction. Upon entering a bend, this raises the body on the outer side of the bend while lowering it on the other side. The result is that the driver and passengers barely notice the car is cornering—even drinks in the cup holder will not spill. Straight-line travel in “comfort plus” also reduces the car’s pitching motions. 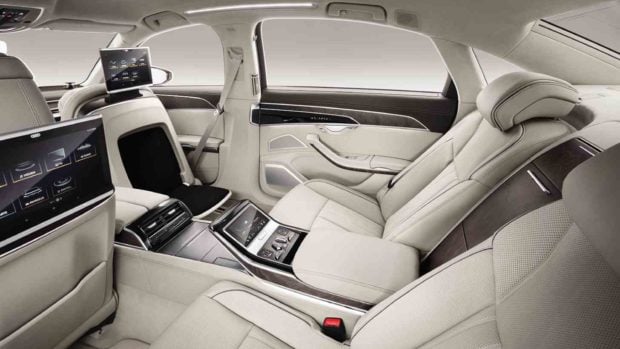 The interior of the new Audi A8 L resembles a spacious lounge with minimal forms. Its Rear Seat Entertainment system boasts two Audi tablets and the Rear Seat Remote.

Predictive active suspension even works when the car is at a standstill. When the Audi A8 L’s door handle is pulled, the body quickly raises by up to 50 millimeters to make entry and exit into the car even easier. The predictive active suspension, when combined with Audi’s “pre sense 360°” system, also increases the Audi A8 L’s passive safety function. In an impending side impact at speeds exceeding 25 km/h, the active suspension raises the body by up to 80 millimeters on the side of the impact. This brings the car’s sill into a better position to absorb the impact energy.

The headlights of the new Audi A8 L, with their combination of metallic slats and chrome lines, are also technical works of art. This is especially true with the HD Matrix LED headlights, which come with Audi laser light. Each of the headlight units contains 138 LEDs that can automatically and separately adjust. Thirty-two of these light-emitting diodes, sharing a single housing, radiate the high beam. The headlights’ laser spot, identified by an X-shaped trim and a blue ambient light, activates at speeds above 70 km/h and doubles the range of the high beam. Combined with the HD Matrix LED headlights are OLED tail lamps which emit a homogenous beam, resulting in a dynamic lighting sequence that runs from the front of the car toward the rear.

The interior of the new Audi A8 L resembles a spacious lounge with minimal forms, its architecture oriented horizontally, and in which ambient lighting elegantly outlines the striking design lines. The range of equipment and materials is extensive, with every detail radiating superlative quality—from the perforation in the seat upholstery, to the electrically operated shutters on the air vents, and the satiny leather of the head restraints. Fitted in the rear compartment are Matrix LED reading lights. 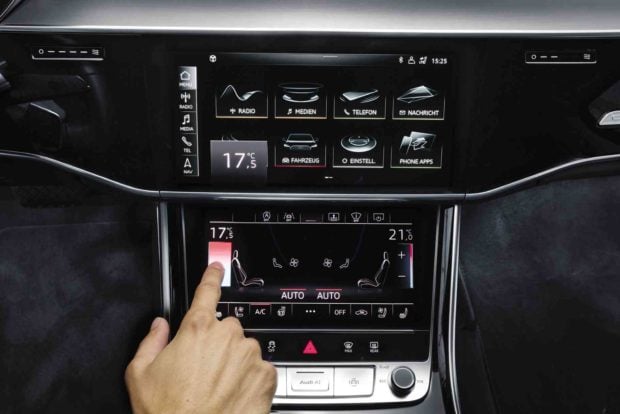 Also available for the enjoyment of passengers is the new Audi A8 L’s Rear Seat Entertainment system, which boasts of two Audi tablets and the Rear Seat Remote. Passengers can use the touch control on this operating unit to run numerous convenience and infotainment features, as well as make phone calls. The Rear Seat Remote with its OLED display is approximately as big as a smartphone and can be removed from where it is stored in the center armrest.

In the new Audi A8 L, MMI touch becomes MMI touch response. At the center of the car’s instrument panel is a 10.1-inch touchscreen display which, when switched off, blends almost invisibly into the high-gloss black surround because of its black-panel look. When the system is switched on, the user interface appears. Marked by new, concise graphics, the menu structure is intuitive and flat, like that of a smartphone’s, and its icons can be arranged according to user preference.

The infotainment system rests on the large display while a second touchscreen display on the console of the center tunnel allows access to climate control and convenience features, including the ability to enter texts through handwriting recognition. 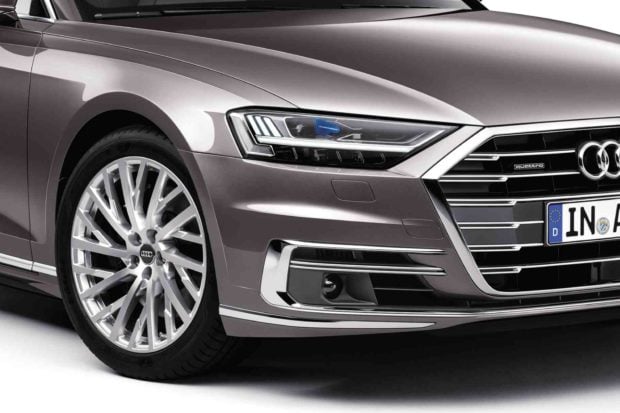 The A8 L’s HD Matrix LED headlights contain 138 LEDs that can automatically and separately adjust.

MMI Navigation plus serves as a high-end media center, and in its latest version rests on a modular infotainment platform called the MIB 2+. It integrates a cutting-edge K1 processor from Audi partner, NVIDIA, and another K1 chip generates the graphics in the digital, full HD resolution Audi virtual cockpit.

The new Audi A8 L is equipped with an electrified drivetrain, or a mild-hybrid system comprised of a belt alternator starter (BAS) and a lithium-ion battery with 10 Ah electrical capacity. This allows the car to coast at speeds between 55 km/h and 160 km/h with the engine switched off, thereby producing zero emissions for up to 40 seconds. As soon as the driver steps on the throttle pedal again, the BAS prompts a swift, smooth restart. A new 48-volt system that functions as the main vehicle electrical system offers a high recuperation power of up to 12 kW plus start-stop operation from 22 km/h, reducing fuel consumption. 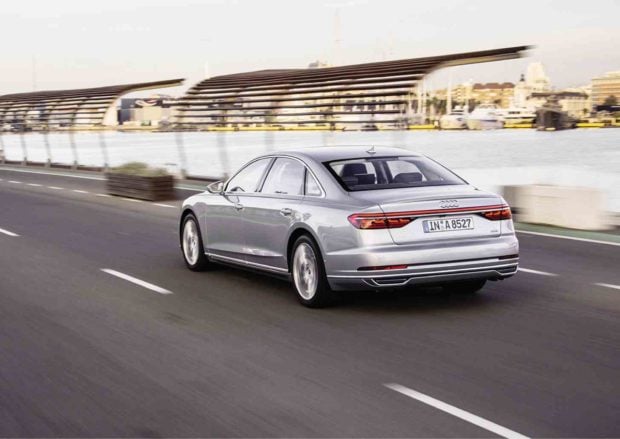 The Audi A8 L features OLED tail lamps which emit a homogenous beam, resulting in a dynamic lighting sequence that runs from the front of the car toward the rear.