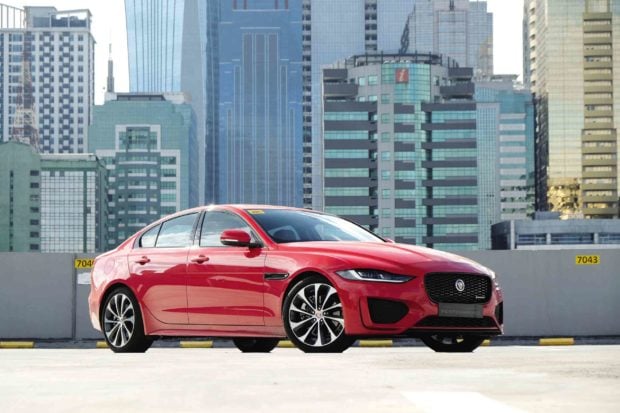 Since the Tata Group took over the embattled Jaguar and Land Rover brands and merged them into a single entity in 2013, the British brand’s future has turned shaky with Land Rover remaining strong and Jaguar taking a massive hit. Previous global sales figures had Land Rover outselling Jaguar three times over, or in short, out of every four vehicles the combined JLR Group sells, only one is a Jag, while the rest are Land Rovers. Blame it on the global trend on SUV’s, and the other European brands for selling more competitive products.

Fast forward to today, and Jaguar continues to struggle but recent releases point to a serious effort at recovery. The heavily revised XE, in R-Dynamic trim, for instance, is a strong foot forward from Jaguar. Revised headlights and tail lights, sharper and sleeker front and rear bumper, a heavily revised interior that features a new LCD display for the primary instrument cluster (like rivals from Germany) and some tweaks to improve interior space means the XE feels fresh. Combined with the very desirable R-Dynamic package (think M-Sport for BMW, S-Line for Audi), the XE is truly sexy and stylish, in a way its Teutonic Rivals can only dream about.

The silhouette is what catches you first. The sloping rear hints at a fastback designed for speed. The 19-inch wheels look sporty, but not overtly so, and the gaping radiator grill is reminiscent of a Jaguar, ready to pounce on its prey. Draped in a stylish red hue, the XE is passionate yet reserved, subdued, but with a very strong hint of aggression. It’s a style the British have mastered to perfection. Cool Britannia as they say.

The XE, in fact, shares its platform architecture with the Land Rover Velar and Jaguar F-Pace crossovers. The massive investment in modular platform sharing (along with engines and powertrains) should eventually reap good fruit as it allows for faster R&D, cheaper manufacturing costs, and better cars for the group. The BMW Group, Volkswagen Audi Group, Toyota and all other car manufacturers have adapted a similar modular platform sharing approach to help design better cars.

Power comes from the JLR Group’s family of modular Ingenium engines, available in both diesel and gasoline trim, turbocharged for good measure. In the XE, the 2.0 CRDi turbocharged diesel delivers a punchy 180hp and crucially, 430 Newton-meters of torque, attached to the ubiquitous ZF-8 Speed automatic transmission that drives the gorgeous 19-inch rear wheels. 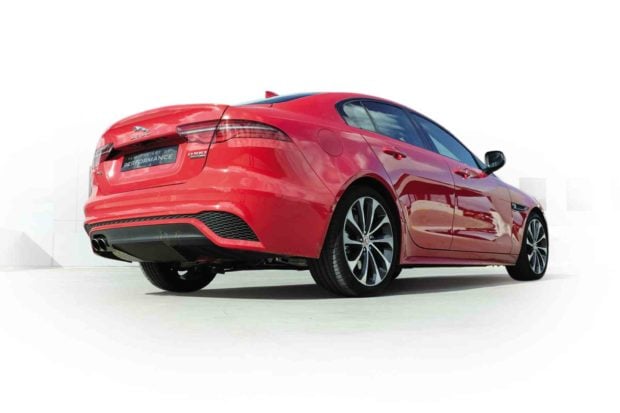 The interior is finished in perforated dark grey leather with contrasting white stitching. Oodles of matte aluminum liven up the interior, and the Meridian surround sound system’s speaker covers look like works of art. Aside from the TFT display for the instrument cluster, the center console houses another large LCD screen for the infotainment system’s brains. Shame that, due to licensing issues and factory equipment bundling constraints, JLR couldn’t include Apple CarPlay and Android Auto on the multimedia system for our market. You do get inductive / wireless charging for your latest generation of mobile phones, plus 14-way adjustable front seats.

The R-Dynamic also gets sport-tuned suspension and a small fixed ducktail spoiler on the boot-lid, differentiating itself from earlier model XE’s that made them look bloated boats on the road. The new model was so attractive, like a sultry woman looking for an equally adventurous partner, that even the wife was excited to ride in it and enjoy an evening in town. Bringing it to a dinner at a fancy hotel in Bonifacio Global City, and another get-together at the Greenhills Entertainment and Shopping District had many people rubber-necking at the XE’s overall package.

The sharp looks isn’t just skin deep of course. The XE has equally sharp real-world abilities. On the open road, the XE laps up the miles voraciously, like a hunter stalking its prey. On winding roads, the legendary agility of Jaguars (both the animal and the car brand) comes alive, switching directions with surprisingly alacrity and confidence, never losing its poise even as the winding and bumpy roads of Cavite, Laguna and Batangas conspired to wring the fast cat of its nine lives. The suspension is firm, but could do with a bit more travel and rebound control. The brake are progressive, but feel a tad over-assisted on the first few millimeters of travel, and the steering feels accurate but could also do with a tad more feel. 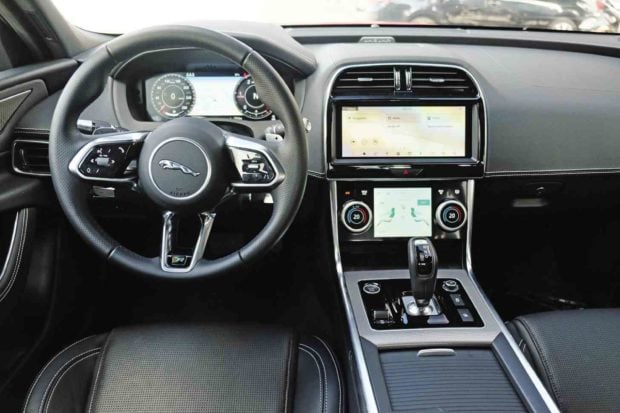 Oodles of matte aluminum liven up the interior, and the Meridian surround sound system’s speaker covers look like works of art

Overall, you can gel rather quickly with the XE R-Dynamic instantly and enjoy the drive. On the highway, the XE did a very good 16km/liter, while returning roughly 9km/liter in city conditions. The figures are quite impressive, admittedly, as I was somehow blessed with light traffic when I had it.

Truthfully, while the Jag is sexy and stylish, filled to the brim with many electronic gadgets many of us would find very useful (reverse camera, park assist which parks the car itself for you, and parking sonar sensors, plus ABS-EBD, TCS / stability control, Lane Departure Warning and six airbags) and drives extremely well, many Filipinos in this segment will still opt for a safer or more popular, more common choice. Think Mercedes-Benz, BMW or Lexus or even Audi. Which is a shame really, because the Jaguar XE easily matches, if not betters those cars, spec-for-spec, looks and overall driving experience.