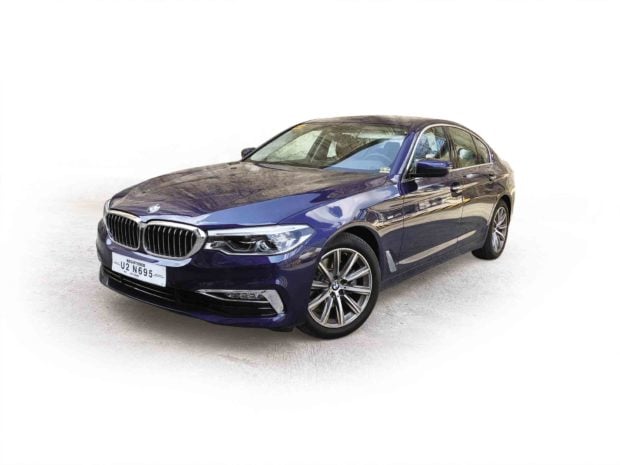 Three million pesos is a lot of money. Except when it comes to luxury cars. Three cool M’s would usually be considered the entry point when it comes to German or Japanese cars with alphanumeric model numbers. We used to ’guesstimate’ BMW pricing by the first number of their model numbers: P3 million for the 3 series, and so on.

So we were a bit surprised, pleasantly, when we found out that the 520i Luxury we were about to hop into and drive away, had a price that started with a 3. Well, it’s actually P3.99 million, so let’s call that P4 million. Still, it’s lower than what we expected, and expectations can mean everything. For comparison, its siblings in the same model range starts practically at P5 million, with the 520d Luxury coming in at P4.95 million. The reason for the price advantage is that the 520d Luxury is assembled in Malaysia, to the usual exacting BMW standards.

The seventh-generation 5 Series, launched as an all-new model in 2017, has presence. At first glance you might mistake it for a 7. The face is comprised of a long, wide hood punctuated with extra-wide twin kidney grilles, and headlamps that flow well into the fenders. Two of BMW’s trademark design cues are executed well. There are pronounced crease lines on the side, and the way the rear door flows into the rear is exceptionally smooth. Despite its large appearance, the 5 series falls well below five meters length, at 4,936mm, with a long 2,975 mm wheelbase.

Pull open the hefty door and you’re greeted with a warm, welcoming cabin, courtesy mainly of the tan leather trim. Seating position, somewhat lower than what we are used to after being weaned on crossovers, is spot-on for a sport sedan.

The 520i earns its Luxury badge with its features. These include power front seats and steering wheel, separate climate controls for front (dual) and rear areas, motorized trunk lid, and power rear sunshade.

Features previously reserved for the 7 Series have now made their way to the 5. There’s gesture control for the audio, where you can wave your hand in the air, parking assist, and perhaps most impressively, self-closing doors front and rear–they softly pull themselves shut.

A couple of quibbles with the interior: the main gauges are displayed using an LCD screen, but they don’t really change in function, so we would have preferred conventional analog dials here. We also couldn’t get along with the gearshift lever. It you’re used to any other type of automatic shifter, BMW’s digital switch version is not intuitive at all. It also gets in the way when you’re moving your hand around the area, and is prone to accidentally getting knocked about.

Push the starter button and what starts up is a 2.0-liter gasoline unit. Turbocharging increases power to 171hp and 290Nm. BMW says that this generation of 5 has been put on a diet, with high-strength steel allowing it to be lighter than its predecessor. Paired with the quick-shifting 8-speed automatic, it’s enough to keep the 1605-kg sedan reasonably sprightly. Zero to 100km/h is rated at 7.8 seconds, and top speed is 235km/h, more than enough for local traffic conditions. To improve fuel efficiency, there’s a mild-hybrid type system, where the engine shuts down when the car is at a standstill. It’s defeatable, in case you’re in stop-and-go traffic. 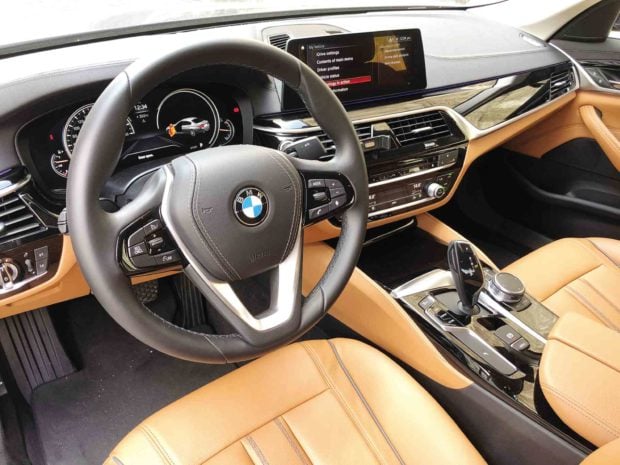 BMW’s sedans and SUVs have changed in character. From being unapologetically geared towards the driver, they have morphed towards being softer, more comfortable, and yes, more luxurious. This provokes mixed feelings, like when your favorite rock band starts losing its hard edge and gravitates towards pop music. You’d probably still enjoy it, but you can’t help missing the old sound.

So it is with the 520i. Drive it as a responsible family man (or, shudder, a chauffeur) would, and it’s all politeness and good manners. It’s smooth, silent, and imperturbable over the rough stuff. Huge back seat, big trunk to swallow your golf clubs, the 520i embodies luxury.

Then we reach some twisty road, perhaps just a sliver of flyover, and we try to see if this is still the 5 Series that we knew and loved. That’s when the car obeys every command, from heavy throttle input (Sport mode) to sharp steering maneuvers. That’s when we feel that the 5 Series is worth all those millions. Any large sedan can do smooth and refined, but few can carve a corner the way the 5 can. This new 5 is like Bono donning a suit to meet the Pope—older, more refined, but it can still rock.

The BMW 5 Series will be on display during the BMW Joyfest 2020 from February 21-23 at the BMW Pavilion, Papa Bear Activity Center, Bonifacio Global City, Taguig