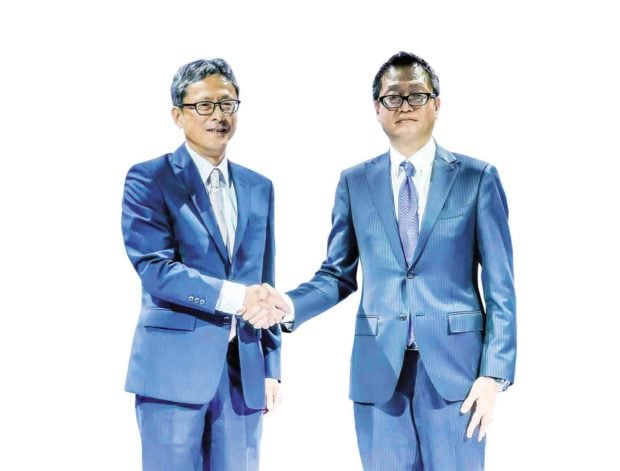 Suzuki (left) formally turning over the reins of one of Philippine automotive history’s most enduring, and ongoing, success stories to Okamoto. The two also led the toasting together with fellow TMP executives and guests (above)

The night’s theme flashed clearly on the ultra-wide video wall at the Grand Hyatt Manila’s Grand Ballroom: “Welcome to the Future of Mobility.”

Of course, everyone knew what mobility was all about, as it was a momentous event organized for and by Toyota Motor Philippines (TMP).

But for the two principal characters in the spotlight last Monday night (Feb. 17), “mobility” was a bit more personal. One of them was moving out, the other moving in.

After a four-year stint leading TMP from one milestone to another, erstwhile president Satoru Suzuki formally turned over the reins of one of Philippine automotive history’s most enduring, and ongoing, success stories to Atsuhiro Okamoto.

With a firm handshake between the two gentlemen, the transition was sealed, and the tradition of leadership passed on from a 58-year-old football and golf enthusiast, to a 51-year-old scuba diver.

The symbolism of the moment is inescapable. The global automotive force that is Toyota is treading the deepest waters of auto manufacturing—meaning, it’s not just making cars for the sake of making cars, but creating solutions for society by transforming into a “mobility service provider.” Don’t raise your eyebrows. It’s a very specific vision, beginning in the 2020 Tokyo Summer Olympics and Paralympic Games from July to August, of which the automaker will be a key partner.

Think of robots—humanoid or functional ones— that will assist athletes and spectators at the games’ venues. As reported by Techcrunch, these machine assistants will help humans get around, get information, experience the games remotely and ferry food, drinks and equipment. Bloomberg reports that when athletes and organizers descend on Tokyo for the 2020 Olympic Games they’ll be ferried around in autonomous cars, while torch relay runners will be accompanied by vehicles equipped with artificial intelligence. Robots will ferry javelins and hammers. At the center of all these is Toyota Motor Corp. (TMC), which will provide 3,700 vehicles—including dozens of self-driving cars, 500 fuel-cell vehicles and 850 battery-electric cars—to the international sports competition.

The captain of the boat steering Toyota in such a direction is TMC president Akio Toyoda, and the wind that blows the ship’s sails is the swift inflow of auto innovations, particularly in terms of connectivity, automation, shared mobility, and electrification. With such new technologies, TMC aims to develop communities that are not just centered on “cars” but on “people.” According to TMP, in the Philippines, where the population is burgeoning and the economy matches the pace of human growth, mobility needs will continue to evolve and become vital to socioeconomic development.

Thus, the formal turnover Monday night was really much more than just a transition of leadership.

Okamoto’s introduction as TMP’s incoming president was witnessed by nearly 400 guests comprised of key members of the business and automotive communities, members of the media, and members of the government. With his assumption of the presidency, TMP also offered a glimpse of how the automaker would transform itself into a mobility company.

Okamoto becomes the first TMP president that has Alfred V. Ty as its chair and Dr. David Go as vice chair.

With the double whammy befalling the country at the beginning of 2020 (think CoVid 19, Taal volcano eruption), members of the motoring media couldn’t help but refer to Okamoto as the new “hero” (a play on his first name Atsuhiro) for TMP. Incidentally, the name “Hiro” in Japan carries with it multiple meanings. It could mean abundant, generous, or tolerant.

A graduate of Keio University, Okamoto started his career at TMC in 1992, gaining a rich marketing experience handling Toyota and Lexus brands for the next 28 years. His previous assignment as EVP of Toyota Motor Asia Pacific also gave him a closer understanding of the Asean market and the Philippines.

For his part, Suzuki leaves TMP on a high note, leading the company to a record-breaking of 39.5-percent market share in 2019, consequently bagging the 18th consecutive Triple Crown by yearend. TMP’s business also grew with the introduction of new Toyota models and the expansion of its distribution network nationwide, with additional 23 dealers. TMP chair Ty, said that when Suzuki came on board in 2016, he led TMP from one milestone to another.

“This elevated the Philippines to the rank of third largest market for Toyota in the Asean and 9th largest in the world. By his unshakeable belief in the ability of Filipinos to build world-class cars, he initiated and persisted in realizing our enrollment in the CARS (Comprehensive Automotive Resurgence Strategy) program. He also committed himself and the company to uplifting the lives of Filipinos. He oversaw the graduation of over a thousand skilled auto technicians from the TMP School of Technology. And, as a culmination of all his efforts towards Number One Quality in All Aspects, TMP was awarded the Total Quality Award of the Philippines. Indeed, the achievements of the past four years are a testament to his strong and caring leadership,” said Ty.

Suzuki was also part of TMP in the late 1990s as VP of the marketing division. 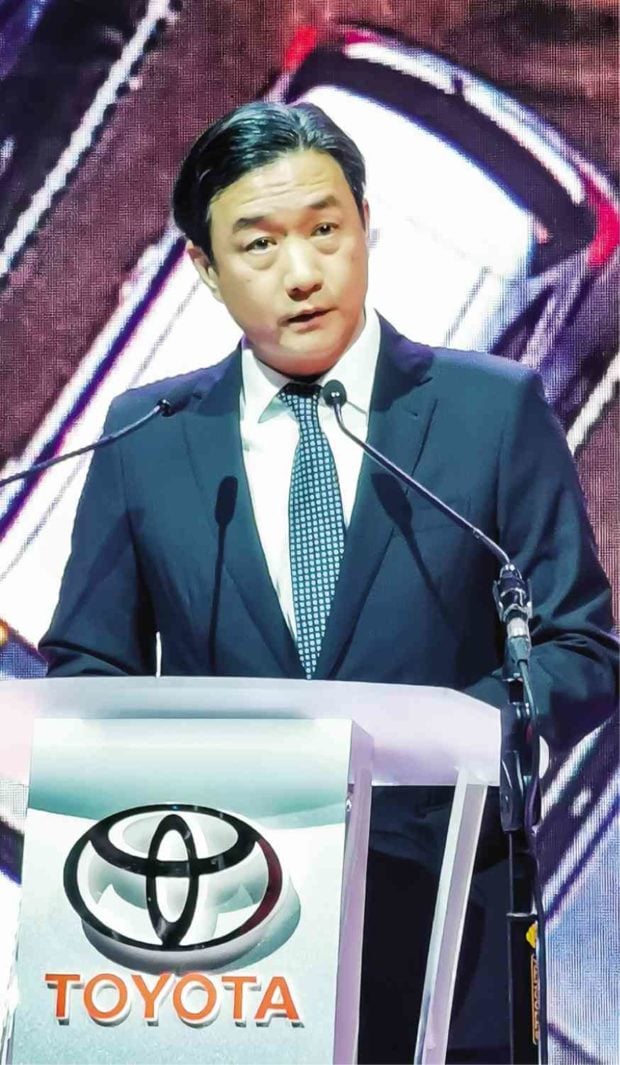 “It has been four solid years, and the business environment changed significantly in that short span of time. The Philippines is at an opportune time as a fast-growing economy, not just in Asia, but globally. I am assured that TMP is capable and ready to seize new opportunities with its new president at the helm,” said Suzuki.

Okamoto said in his speech: “I started my first few weeks in the Philippines with unforgettable memories, the eruption of Taal Volcano. This eruption has affected many Filipinos and even our plant operations. On the other hand, I have seen how strong Filipinos are, the great Filipino spirit of ‘bayanihan’ and resilience have been very evident and shown by everyone. I also saw how the Filipinos’ value of ‘malasakit’ is clearly manifested, as we express our concern to the company and to our fellowmen.”

Okamoto told Inquirer Motoring that under his leadership, the CARS program will still be a top priority, while the grassroots motorsports program Vios Cup will still continue.

Suzuki thanked TMC, TMP Founding Chair George SK Ty and Chair Alfred V. Ty, TMP officers and members and Toyota suppliers “for your strong commitment, especially during our busy times in preparing for the production and final roll-off of the All-New Vios under the CARS program.

“Now, TMP proudly produces the Philippine-made Vios with increased localization, made possible by a highly competent Filipino workforce using new technologies and capabilities. With steadfast cooperation and dedication to excellence, you remained committed in consistently attaining the high quality standard of auto parts needed for the locally manufactured Vios and Innova, which are well-loved by our customers,” said Suzuki.

Suzuki also thanked the Philippine government “for being our partner in enabling the automotive manufacturing industry to grow and develop in this country.” 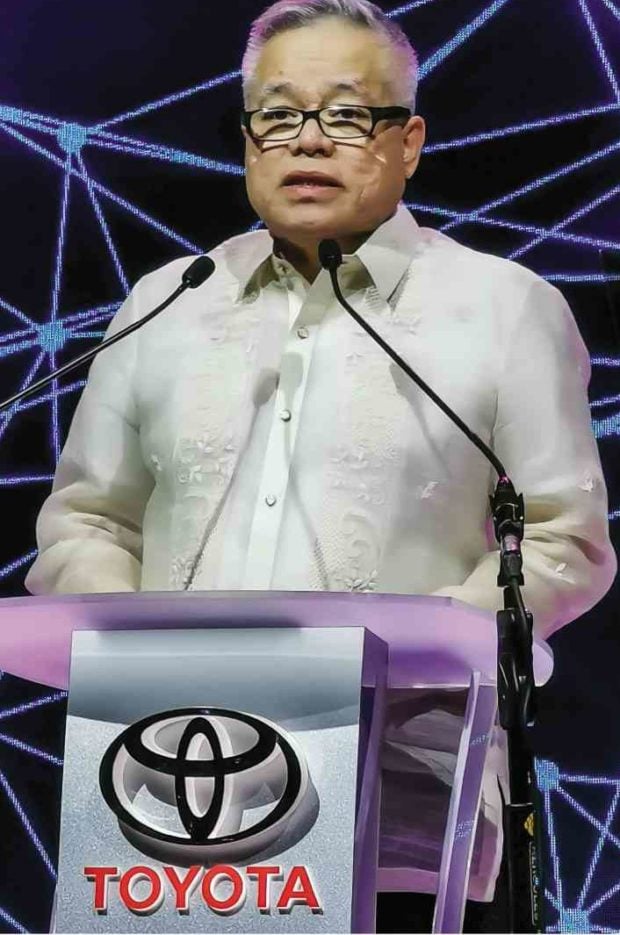 “It is worth mentioning that with your approval back in 2016 of TMP’s participation in the CARS program, TMP as a vehicle manufacturer, together with our network of auto parts makers, was given the opportunity to take part in revitalizing local manufacturing capabilities and boosting regional competitiveness,” said Suzuki.

Department of Trade and Industry Secretary Ramon M. Lopez said in his speech: “We are looking forward to working very well with the new TMP president, and again our congratulations to the outgoing president Satoru Suzuki for his inspiring leadership and for being a good partner of the DTI, especially as we push for reviving and revitalizing the manufacturing sector, their intense participation in the CARS program which is really envisioned to establish manufacturing facility for automotive, creating more jobs, creating linkages with the local auto parts suppliers.

“And we congratulate Toyota for increasing the domestic local content from below 20 percent, to what I understand as 42 percent. That means, (there are) greater linkages to the domestic economy, a growing auto parts sector, which we are also trying to grow as a major source of exports for our country,” said Lopez.

He added: “You have shown also a huge employment figure. In Toyota itself, you employ around 2,000, but the indirect labor created is at 55,000. You provide business to 95 local suppliers. We thank you also for the investment over the years, and with the participation in the CARS program that you invested over P5 billion already with modern facilities.”

Ty, in his speech, said of the Filipino motorists: “Because of your unwavering support and friendship, we have been able to remain true to our promise of service to the Filipino and the Philippine nation.” 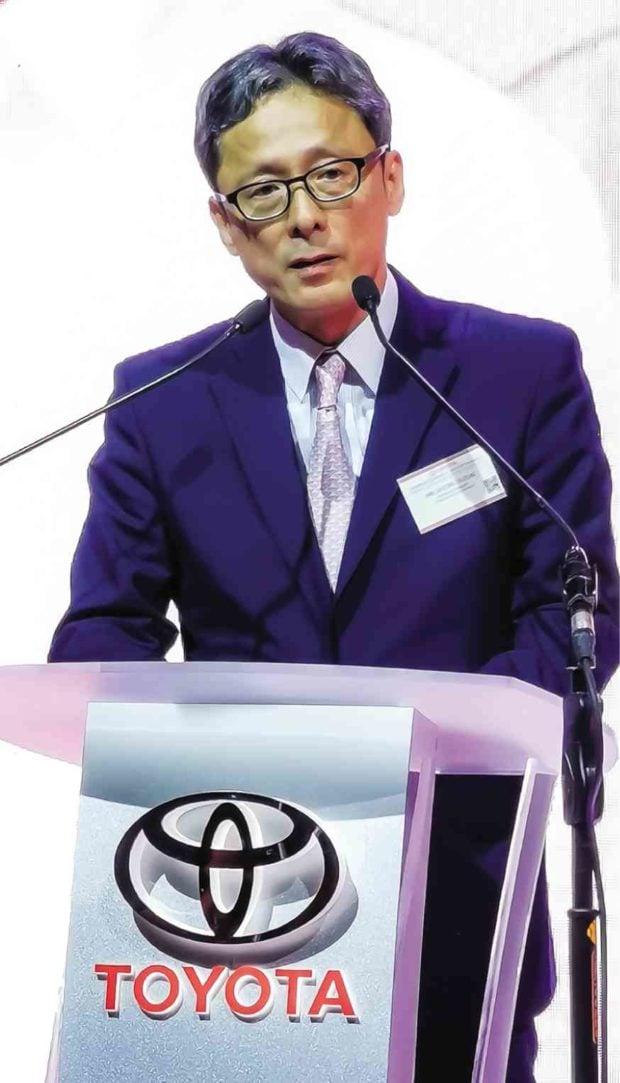 He related that since TMP’s start of sales in 1989, the company has delivered “a total of 1.7 million Toyota vehicles to your homes and businesses.”

“We are truly humbled that you have made us your automobile of choice. In our first 20 years of service, we sold an average of 30,000 vehicles per year. In the last 10, that number has grown almost four times to 114,000 units a year. And last year alone, we delivered 162,011 Toyota cars, SUVs, passenger vans, and commercial vehicles to your homes.”

Over 30 years, TMP has made a cumulative investment of P64 billion. Most recently, TMP committed P5.42 billion under the CARS program of the government, to assure the country’s competitiveness as an automotive production base in the region.

“In 2019, we paid P46.8 billion in various taxes and duties towards national development, or a cumulative amount of P384 billion since we started operations in the Philippines. We have exported close to $1 billion of auto parts annually,” said Ty.

Will this be a tough act for Okamoto to follow? This “hiro” needs to take a long, deep breath before diving in.