The Mazda 6 sedan, upgraded with the SkyActiv G 2.5 turbo engine is a true driver’s delight

If you’ve been following my regular test drives, you will notice that I am very much a huge fan of Mazda. The modest brand from Hiroshima, though small in size versus giants like Toyota and Nissan, has continued to impress the motoring industry with its impressive engineering that not only works as promised, but is relevant and accessible to the vast majority of car buyers looking for a little more pizzaz in their daily drives.

The Mazda 6 sedan, upgraded with the SkyActiv G 2.5 turbo engine is a true driver’s delight. We’re not strangers with the Mazda 6’s athletic attributes: sharp chassis, sporty yet pliant suspension (revised for its recent facelift), sharp steering and powerful, fade-free and easily modulated brakes. Even the interior feels very sporty: intimate yet unobtrusive, with controls well placed to put you right smack in the mood for some sporty driving. Other changes include redesigned front and rear bumpers

The KODO: Soul Of Motion Design Language has aged well, and despite being quite old at eight years, the Mazda 6 looks fresh, crisp, stylish and relevant as ever in the executive sedan segment. The Jinba Ittai philosophy (horse and rider as one) has also helped hone the 6 and channel it towards keen drivers who seek a sporty executive express at reasonable prices.

Now, with 228hp and 420 Newton-Meters on tap driving the front wheels via a 6-speed automatic transmission, the Mazda 6 has finally stepped into its role to claim the top-spot for keen drivers in the executive sedan segment. The added power wakes up the car even more, allowing its hidden talents to shine. Power doesn’t come in one strong wallop: it builds up progressively, smoothly and predictably, allowing you to push harder, brake deeper, corner faster and essentially cover far more ground in the least amount of time possible.

But even if you’re not in the mood to push hard, the Mazda 6 is a relaxed cruiser. The infotainment system features Apple Carplay and Android Auto, allowing for easy and seamless mobile phone integration. Waze and Spotify make bumper to bumper traffic jams more bearable, and the BOSE surround sound system truly transforms the inside into a mini-concert hall. Available only as the top-trim Signature Series, the Mazda 6 SkyActiv Turbo comes with soft Nappa leather in Dark Chestnut, accentuated by real Japanese Sen wood trim and Ultrasuede accents. 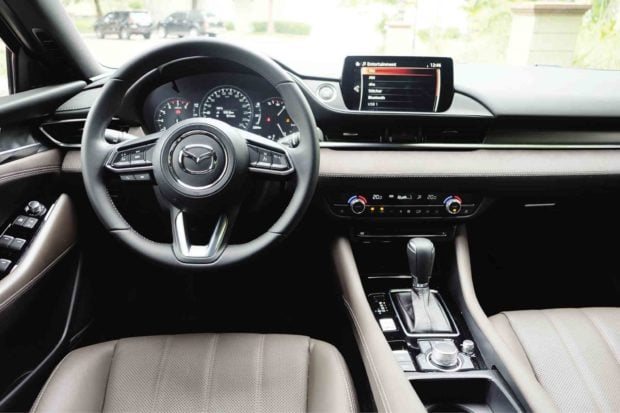 The cabin is wrapped in Nappa leather in Dark Chestnut, accentuated by real Japanese Sen wood trim and Ultrasuede accents

The Mazda 6 has heft, solidity and refinement more commonly associated with European cars. But it doesn’t have the heavy-handed feel of the European elite either: you are blessed with light yet feelsome controls that deliver the right sort of tingles to get you excited on your drive.

The 6 Turbo also integrates new safety technologies: Lane-Keeping Assist, Blind-Spot Monitoring for Rear Cross Traffic Alert make the revised 6 safer, along with ABS-EBD brakes, traction/stability control and six airbags should you really lose the plot. New design and achingly beautiful 19-inch wheels shod with high-performance all-season Bridgestone touring tires fill out the wheel arches, giving the Mazda 6 an air of confidence and a sense of purpose, not to mention impressive mechanical lateral acceleration. Indeed, you truly find yourself pushing the car harder than what most would deem appropriate in a car of the 6’s size and heft.

In real-world driving conditions, I fared a decent 6.5km/liter through some heavy traffic in the city, and managed only 12km/liter on the highway, bogged down by Yuletide traffic jams at some points on SLEX. But with slightly better traffic conditions, a longer drive and more miles under the tight new engine’s belt, fuel efficiency should improve dramatically. 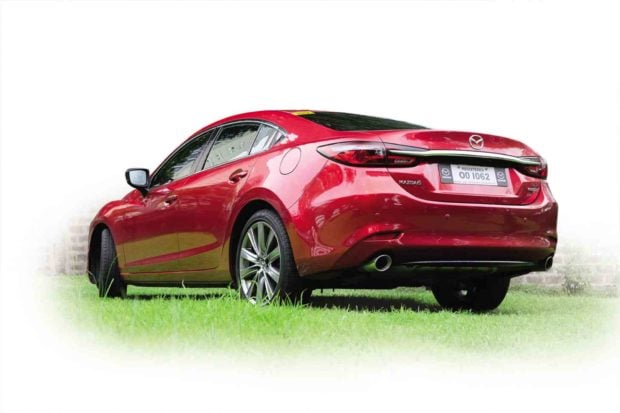 A sporty executive express at a reasonable price

Mazda, and its products aren’t for everyone. The Mazda 6 fights to stay relevant and afloat in this day and age when everyone wants an SUV, that mobility is seen as an autonomous exercise rather than an enjoyable endeavor, and driving is a chore rather than the liberating adventure many driving romantics see it. If you love driving, value intimate feedback from your vehicle, but have to live with real-world responsibilities, few cars are as composed, and as polished, not to mention as desirable and enjoyable as the Mazda 6. Looks perfect in a garage with an MX-5 for the weekends and a CX-5 for the wife and kids.