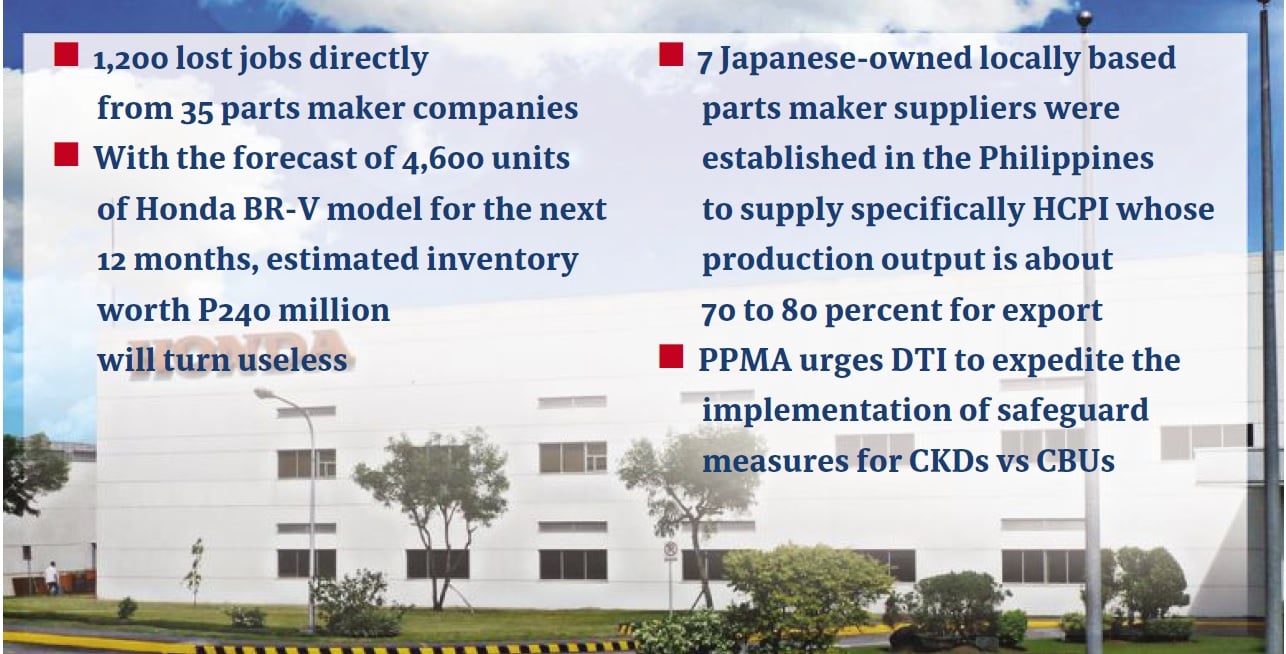 On a long holiday weekend that hardworking Filipinos would have looked forward to for the needed rest and relaxation, the unfolding drama that played out at the Honda Cars Philippines Inc. assembly plant in Santa Rosa City, Laguna turned things completely around not just for the hundreds of plant workers, but for local auto parts suppliers, as well.

“We got shocked with the news. Everybody was surprised, even the management of Honda,” Ferdinand Raquelsantos, President of Philippine Parts Makers Association (PPMA), remarked when asked by Inquirer Motoring last Sunday night (Feb. 23) how the auto parts sector reacted to HCPI’s plant closure announcement.

HCPI announced on Saturday (Feb. 22) that it would be closing its 28-year-old manufacturing plant in Laguna effective March 25, 2020.

In a statement sent to the media, HCPI said: “To meet Honda’s customer needs in the Philippines for reasonably priced and good quality products, Honda considered efficient allocation and distribution of resources. As such, after consideration of optimization efforts in the production operations in Asia and Oceania region, Honda decided to close the manufacturing operations of HCPI.”

Raquelsantos told Inquirer Motoring that after Honda’s “business plan presentation to all employees on Feb. 22 at 3:20 p.m. in the plant canteen, a video of HCPI President Noriyuki Takakura came out announcing the termination of production. Right after that, all production employees, including the managers and VPs were escorted by the guards outside of the premises. The Department of Trade and Industry (DTI) was not even aware of the plan as texted to me by Secretary Mon Lopez this morning (Feb. 23),” said Raquelsantos.

Raquelsantos told Inquirer Motoring that his company, AutoFIR Seatbelts, “was even in the middle of development for the supply of the new BR-V model that is soon to happen”. He added that there were over 47 parts makers/suppliers that would be affected. On Feb. 24, PPMA held an emergency meeting with its members to assess the total impact of the closure, especially that of the impending loss of employment.

Of these suppliers, seven would be taking the heaviest hit because “50 percent of their supplies are intended for Honda,” Soriano added. The rest still maintain significant supply contracts with other Japanese brands in the Philippines.

“There will be 1,200 lost jobs directly from 35 parts maker companies, Tier 2 and Tier 3 and other indirect contractors including logistics and production supplies. Originally there were 47 parts maker suppliers for both BR-V and Honda City, but the latter (model) had terminated production for its model life, so there are only 35 suppliers left.

All suppliers follow a three-month firm order, plus another three months forecast and about another six months ordering lead time for raw materials. With the forecast of 4,600 units of Honda BR-V model for the next 12 months, the inventory to this pipeline will turn dead. We estimate this inventory to be around P240 million, plus the tool and die and assembly fixtures that will turn useless. Q-Shakai (Japanese-owned locally based parts maker) suppliers, totaling seven companies, were established in the Philippines to supply specifically to HCPI. However, these companies’ production output is about 70 to 80 percent for export. We just hope they won’t leave, as there are local Filipino tier 2 parts makers that supply to them,” he explained. 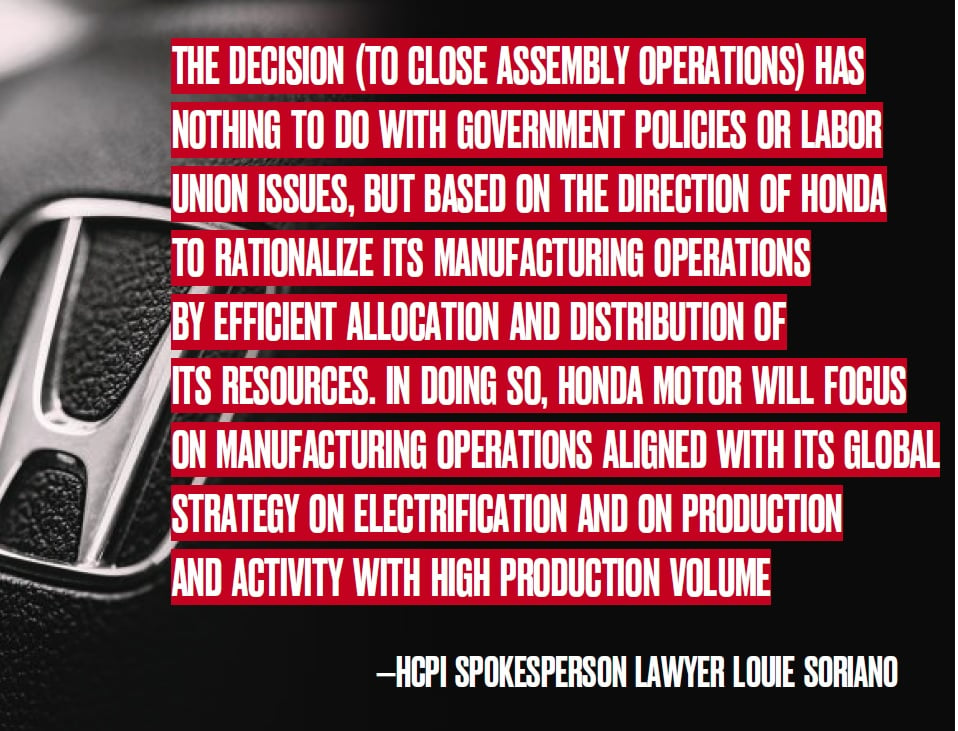 “The PPMA believes that HCPI will comply with their obligation to pay for those component parts and raw material inventory that will turn dead. As this closure is a big shock for all of us, we understand that Honda worldwide has done similar closures, including production facilities in Europe.”

Raquelsantos said that for now, the organization’s thrust would be to look for new job assignments for these affected workers.

“As we urge the DTI to expedite the implementation of safeguard measures for local assembly and hopefully for the retaliation proposals, we believe this will be the key to sustain whatever local assembly we have and even entice new entrants to promote additional employment. This will mean that prices of locally produced completely knock-down (CKD) vehicles will be competitive versus the imported completely built-up (CBU) units. Likewise, if the Flag Law be re-imposed, a 15-percent incentive will be given to locally produced products,” he stressed.

“I would like to add that in the drafting of increase in excise tax, in 2018, we’ve been asking to have disparity between CKDs and CBUs to provide incentives to locally produced vehicles and ultimately promote local employment. Now, (local assembly of) Isuzu D-Max is gone and Honda City and BR-V could not compete. Not to mention the hurdle that Mirage and Vios are now facing with imported units of the same category,” said Raquelsantos.

Soriano said that the cessation of HCPI’s manufacturing operations would affect 387 assembly plant workers. HCPI sales and aftersales operations as well as accounting, data, and IT sections would continue to operate.

“The decision (to close assembly operations) has nothing to do with government policies or labor union issues, but based on the direction of Honda to rationalize its manufacturing operations by efficient allocation and distribution of its resources. In doing so, Honda Motor will focus on manufacturing operations aligned with its global strategy on electrification and on production and activity with high production volume,” Soriano explained.

“The decision to close the Santa Rosa manufacturing plant is final,” he said, when asked if Honda Motor would reconsider the decision. GMA News TV reported Feb. 24 that the Department of Labor and Employment (Dole) and the DTI would meet with HCPI management. Labor Secretary Bello III was quoted as saying that the government would try to convince HCPI to continue its operation in Laguna to save the jobs of over 300 employees.

The plant closure is not unique to the Philippines. On Feb. 18, Honda Motor Co. announced it would close assembly plants in England and Turkey by 2021 as the automaker pushes toward electrification and confronts changing trends in trade relations. Honda CEO Takahiro Hachigo announced the move at the company’s global headquarters in Tokyo, according to Autonews.com.

Soriano confirmed this as the same reasons for the plant closure in the Philippines. “Car companies are shifting towards future technologies, electric vehicles, self-driven vehicles, interconnectivity.” He added that Honda needs to respond or risk being obsolete. “Honda needs to do efficient allocation and distribution of resources. It has to prepare for that future. That is the direction of Honda Motor. It was compelled to rationalize its manufacturing operations towards the strategy of electrification.”

He said that another reason was the company’s focus on core efficiency and on productivity, which meant producing in countries where the market is strong.

An industry insider said that “local parts makers will lose some business” with the shutdown of the Honda assembly plant.

The source, who requested anonymity, added that the “closing of the plant doesn’t come as a surprise”.

“The Asean Free Trade Agreement we entered into reduced CBU (completely built-up vehicles) duties to zero years ago. Our small-scale auto manufacturers were exposed to compete with large manufacturers in more developed countries like Thailand. This same reason drove Ford to close its Philippine plant many years back, and Isuzu Philippines Corp (IPC) for its D-Max pick-up.”

IPC pulled the plug on the local assembly of D-Max in July 2019.

Asked about the implications of the HCPI plant’s closure on other car brands maintaining local assembly facilities such as Toyota and Mitsubishi, the insider said that the “impact on other brands with local manufacturing will be minimal or none. However, if government succeeds in imposing countervailing duties on CBU’s imports, the timing couldn’t be worse.”