In 2006, I was able to try a second generation Prius and that car was an utter disappointment back then. The hybrid system hardly worked, the batteries took forever to charge, and the Prius felt very sluggish. It didn’t help that it looked very odd. Not the Japanese sort of different, which made it cool, odd. But it just looked plain, well, ugly.

Fast forward over a decade, and I recently reviewed the current generation Prius and was all smiles. Either I changed a lot (about a hundred pounds less and a few inches less around the waist), or Toyota’s Hybrid Synergy Drive Technology has vastly improved. I would like to think it’s the latter, because I am absolutely hooked on Toyota’s hybrids now.

Let’s get straight to the numbers shall we? On my drive up to Tagaytay, in the middle of the day, I averaged 18.7 kilometers. That included a one-hour slog through EDSA, a 45 minute crawl on SLEX, and a tortuous climb up Sta. Rosa-Tagaytay highway behind some slow-moving trucks. On my drive down, from Tagaytay to Skyway Magallanes ramp, I averaged 64.8 kilometers per liter. Let that sink in for a moment guys. From Skyway Magallanes ramp to my home in Mandaluyong, another seven or so kilometers away, fuel efficiency dropped to an acceptable 57.7 kilometers per liter. Do I have your attention yet?

For the rest of the week while I had the Altis Hybrid, fuel efficiency averaged between 22.4 to 24.1 kilometers per liter within city limits. The moment I stepped onto SLEX, the lowest fuel efficiency I got was ~39 kilometers per liter. I covered a massive 600 kilometers in a single tank, did three round trips to Tagaytay and then some. Truly, the technology has improved, and I was sticking to the speed limit of ~100km/h. 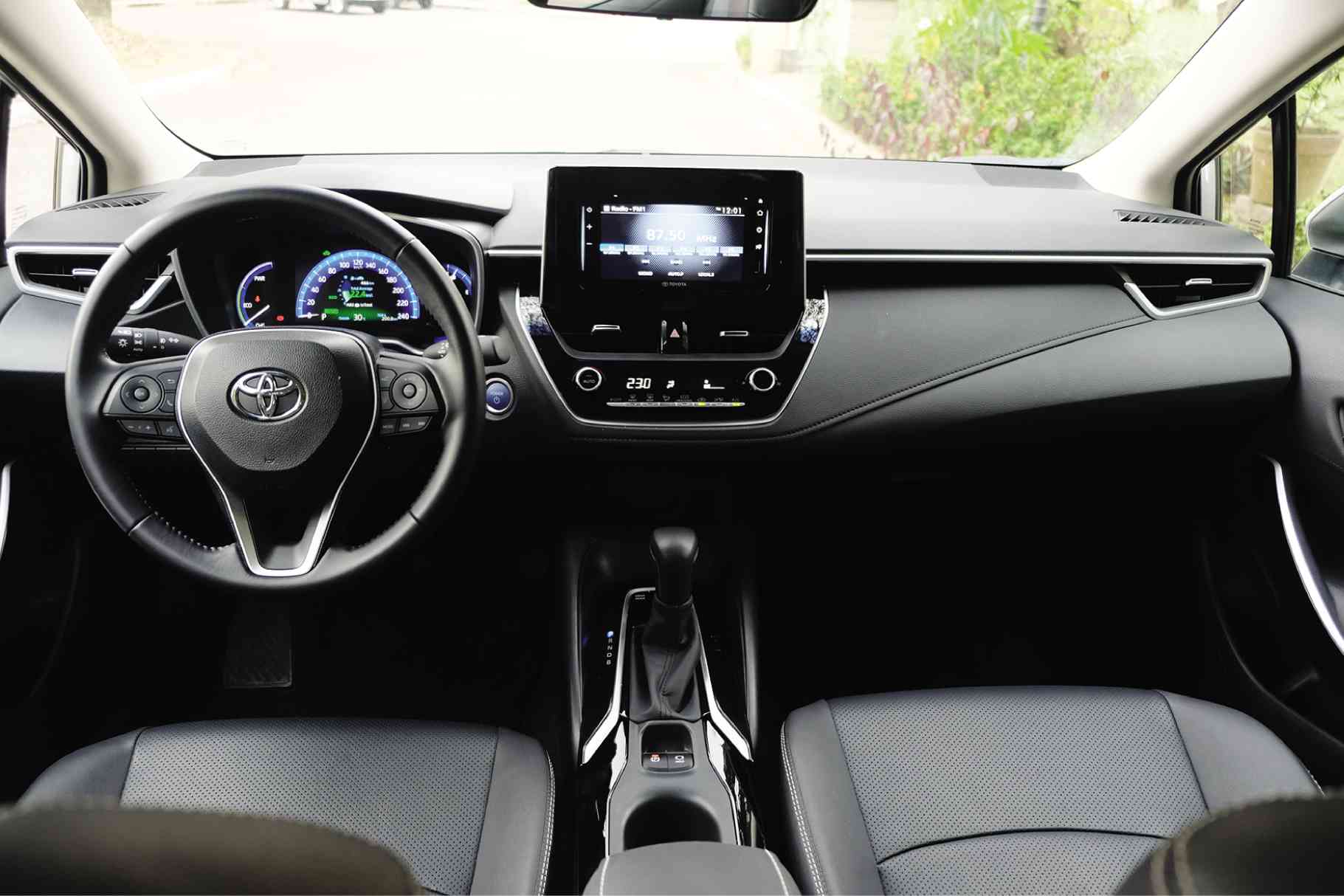 Of course you just don’t get in and expect it to drive itself and deliver amazing fuel efficiency. But it is easy and doable, even for average drivers who have some common sense and are law-abiding.

Even the missus found the Altis handsome and attractive, not because of the amazing engineering prowess, but because the handsome looks ape that of the current-gen Camry, giving the Alts a mature, junior executive charm. Space inside is good, comfort is equally good, and driving dynamics are noticeably better than your typical Toyota sedan: suspension is the best yet I’ve tried in a non-sporty Toyota chassis, the brakes are strong thanks to the regenerative braking effect of the Hybrid Synergy Drive which charges the system, and the steering is light and easy. Yes, it could do with a bit more feel, but you’re barking up the wrong tree on this one as the Altis is meant to deliver efficient, painless and easy everyday transportation. Given today’s traffic situation, this is spot-on perfect!

Toyota has learned to be slick while being simple: the black interior, covered in soft touch plastics and black perforated leather is punctuated by silver stitching and silver plastic trim around the A/C vents. There is a minimum of buttons, and a large LCD display sits atop the dashboard. Initially we thought it was a local add-on, but photos I’ve seen abroad of the Altis Hybrid have the same LCD display which forms the brains of the infotainment system. Seating position is excellent too: comfortable long distance rather than sporty, but it works nonetheless.

The heart of the Hybrid Synergy Drive is composed of a 1.8 liter 16-valve normally aspirated engine code-named 2ZR-FXE. It is an Atkinson Cycle high-efficiency engine designed to minimize mechanical pumping losses at the expense of outright absolute power. The upside is that the engine is less stressed, and generates less heat in the process. Combined with the electric motors, the Altis outputs 121hp and 207 Newton-Meters of torque, while achieving a thermal efficiency of 40 percent. Typical modern 4-stroke internal combustion engines can only manage roughly 30-35 percent thermal efficiency. Power is then transmitted to a continuously variable transmission, simulating the perfect gear for every road and driving condition.

Driving the Altis, you want to accelerate quickly to the speed limit and stay there, which gives it the best efficiency. You also tend to avoid braking or stopping, which became a game for me, to again deliver the best fuel efficiency possible. That’s the kind of mind-set you need to successfully drive it: zero waste, no unnecessary motions, no absent-minded movements. It takes a good bit of concentration, but the returns on efficiency, and your alertness on the road is well worth it. 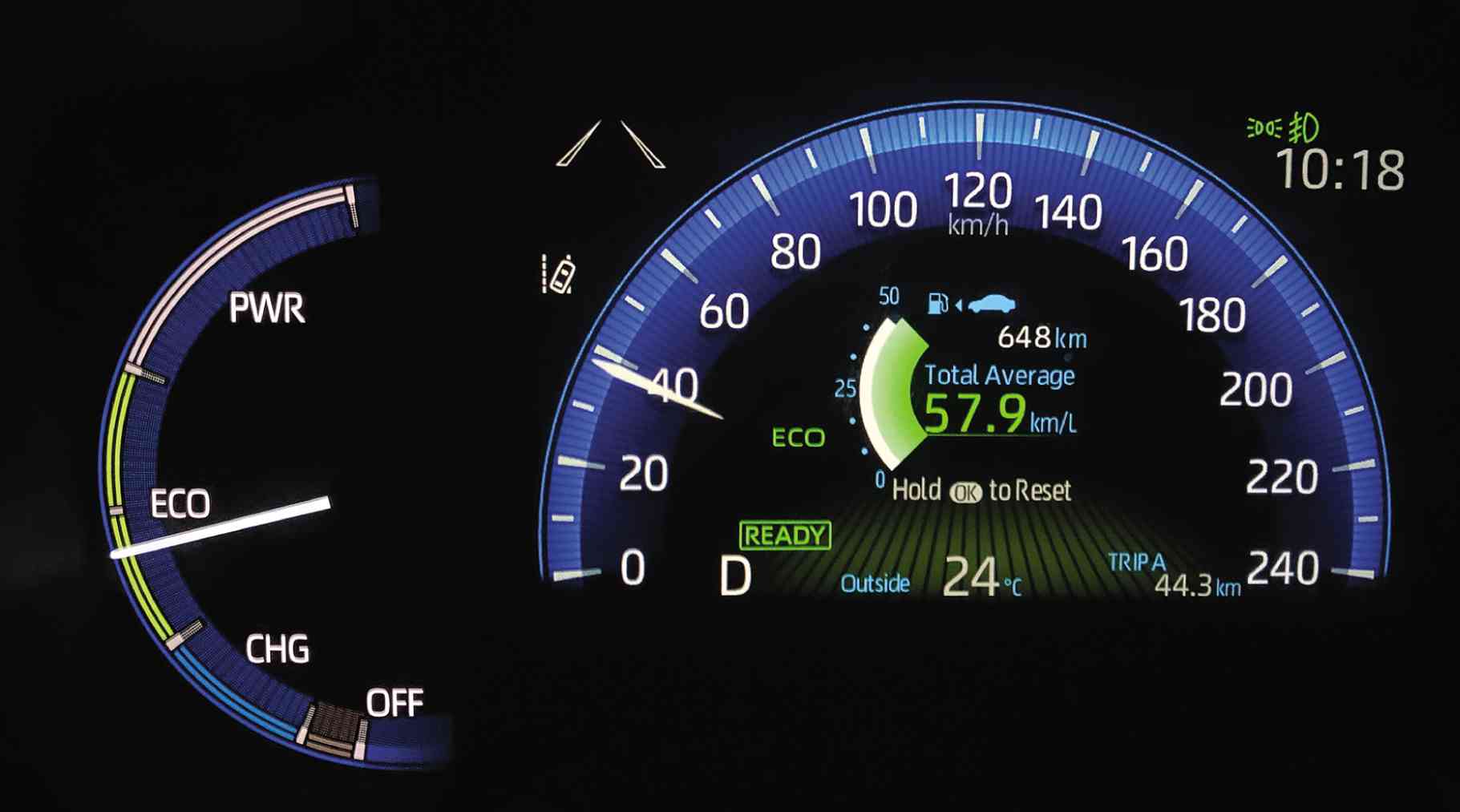 With hybrids, one gets phenomenal fuel consumption

It is very safe too, as the Altis Hybrid comes with seven airbags, ABS-EBD brakes, traction / stability control, blind-spot monitoring and lane departure warning which were quite intrusive, I had to turn these aids off. But I can imagine them being very useful on a very long drive home, late at night, with no one but you in the car.

I posted my fuel-efficiency results on social media a few months ago, and while people were impressed, the biggest question are the cost of battery replacement. Thankfully, the good people at Toyota Motors Philippines saw my post and replied, saying that the batteries should be good for at least seven to eight years (although warranty is up to five years), and cost of replacement is in the neighborhood of P250,000. The technology is still expensive today, but as it improves and matures, the price of battery replacement should go down in the future, benefiting motorists who really plan on getting an Altis Hybrid.

I’ll be honest, if you live in flood-prone areas, or drive through many bad roads, the Altis Hybrid might not be for you as the batteries dislike being submerged in water very much, and don’t like being shaken to bits too (makes them unstable and potentially go boom, but that’s in extremis). But if you’re a purely city dweller, or if you regularly drive out of town but stay on the main expressways, the Altis is absolutely perfect. At P1.58 million, no car can deliver the same level of ease and efficiency, not to mention a small carbon footprint as the Altis.

EV’s and hybrids are the way of the future, whether we like it or not. While many will bemoan the loss of driving romance from big-engined, glorious sounding machines, cars like the Altis means we can continue to drive freely and enjoy motoring for many years to come. And that’s what the Corolla Altis Hybrid is all about: delivering a better and sustainable way forward.