On the shifting sands of Mui Ne, the kind of terrain that would seriously test a vehicle’s off-road-worthiness, the Ford Ranger Raptor strides through with relative ease

So you’re leaning towards acquiring a pickup truck that’d be capable of taking you where the paths aren’t flat, even, stable, or where there isn’t a path at all. That after all, is the essence of going off-road. But no matter which truck you pick, there’s always that invisible limitation that keeps you from venturing too far from the safety of well-paved, predictable roads. It’s almost like being bullied to stay within set boundaries. The typical truck after all, is mainly a city dweller that’s equipped to go off-roading on a somewhat mild degree. But what if you’re inclined to want more… of the freedom, the fun and adventure, and the sheer ability to go further? Then you’ll need a truck that’s on a whole different level.

To bring the point home that they have a truck on that level, Ford brought a bunch of us journalists in the most unlikely location- Vietnam, for an extreme drive with the Ford Ranger Raptor. The Raptor is like a Ford Ranger that’s gone through guerilla warfare training, then was thoroughly equipped to go all-out, to handle almost any terrain you put in front of it. To put that to the test, we drove over 200 kilometers from Ho Chi Minh, and climbed nearly 5,000 feet above sea level to reach the city of Dalat, a popular tourism destination Southeast of Vietnam due to its cooler temperatures and lush natural surroundings. We were joined by the Thailand and Vietnam motoring media, so it was a sight to behold- a long convoy of hulking Ranger Raptors snaking through the highways and twisty roads to our target destination… the Pink Grass Hills of Dalat!

As we veered off the concrete roads into a trail flanked by tall pine trees, we made our way to the top of a hill where we alighted and sat awhile for an important briefing on the off-road course we were to tackle, over some freshly brewed Vietnamese coffee and DIY Banh Mi’s (delish Vietnamese meat and veggies sandwiches). Each of us were to take turns behind the wheel, and go through seven off-road stations designed to showcase and vividly demonstrate the exceptional performance features of the Raptor. With six drive modes as presets on its Terrain management System (TMS), one can select Grass/Gravel/Snow, Mud/Sand, Rock, or Baja mode, aside from the Standard and Sport modes. Of course, these work in conjunction with its robust 4×4 drivetrain, with a locking rear differential. In a capsule, each drive mode intelligently adjusts and reacts real-time to whichever terrain you fancy or find yourself in, with just a push of a button. Every aspect from gear shift selection and timing (from its 10-speed automatic transmission), to traction control, engine mapping, throttle response and more, optimize the Raptor’s traction, handling, and controllability to maximize performance, safety, and of course, fun- in any given situation. 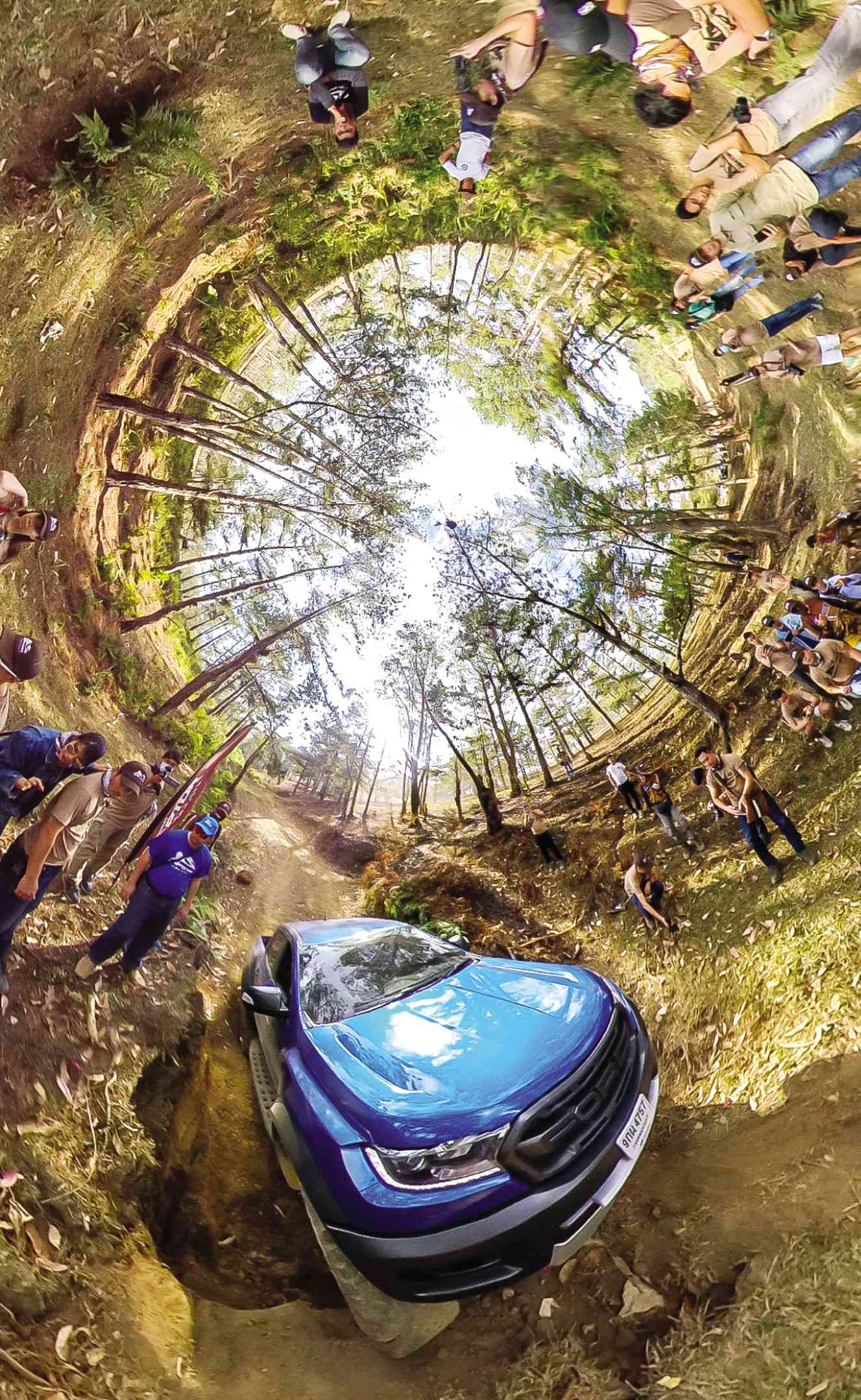 The Raptor should be the poster-truck for disaster preparedness, with its advanced Terrain Management System and extracapable 4WD drivetrain, it’s ready for anything

The Raptor’s Hill Descent feature came in handy as we rolled down steep slopes, and as we discovered, each station we negotiated on the trail had different obstacles that we were well-equipped to handle. It was a cinch toggling between 4WD-High/Low, Diff Lock and of course various drive modes on the TMS, but I had the most fun with the Baja Mode- which allowed me to barrel through the ruts, bumps and rocks at high speed. Stifling my wide grin, I had to apologize to the trail guides for the huge clouds of dust I unintentionally created and um, styled their hair with. I just had to compare how it felt on a totally different terrain blasting off-road with the Raptor a few months back, at the Sacobia River- the Lahar mud trail that led to Mount Pinatubo. That was my first crack at the Raptor, and what a revelation it was in terms of its off-road capability. The damping was superb in the sense that it soaked-in the ruts and bumps, and even as we (dare I say it) jumped some sizable drops while were going at it at 100Km/h, we weren’t bouncing around like Mexican jumping beans in a can. I was able to maintain my composure in spite of my semi-manic laughter behind the wheel. The Fox suspension made all the difference with the Raptor’s trajectory at high speed, and the comfort levels in the cabin. My throttle was floored, and so was I. The Raptor soared in that respect.

Been there, dune that

The ultimate test of traction management and capability has to be traversing one of the most treacherous terrain known to man. Fine, loose sand. Day two of our Raptor drive was set on the unique desert and majestic sand dunes of Mui Ne. I could swear we were somewhere in the Middle East when we finally set foot on the area. Out of excitement, all I could really remember about the safety briefing was that if we misbehaved, we’d be promptly relegated to the passenger seat and brought back to base- just because one could easily lose control and roll sideways down a steep sand dune, if one didn’t listen carefully and drive intelligently under the driving instructor’s strict guidance. Funny though, as once we took off one Raptor at time, the instructions- excitedly barked out half the time in Vietnamese, were for us to go flat out to the first markers about 400 meters away. Set at 4WD-High and on Baja mode, I could feel the Raptor grabbing as much traction as it could with its beefy tires from the shifting surface of the desert, but keeping us in constant forward motion the whole time. The 500Nm of Torque was put to good use, as we carved paths down the smaller dunes and sprinted through the flat paths. Another test was meant for the driver, and his nerves. Perched perpendicularly atop a tall dune that had a sheer 40-degree downward slope, we were told to fight every instinct to jam on the brakes, trust the Hill Descent Control to do its job and just steer straight into the drop… which was not visible at all from the driver’s seat. With a downward angle that’d drape me on the steering wheel if it weren’t for the seatbelt, we slowly but safely descended the gargantuan dune amid our exhilarated sighs of relief. I’d say the Raptor graduated with a master’s degree on desert dwelling on that run. 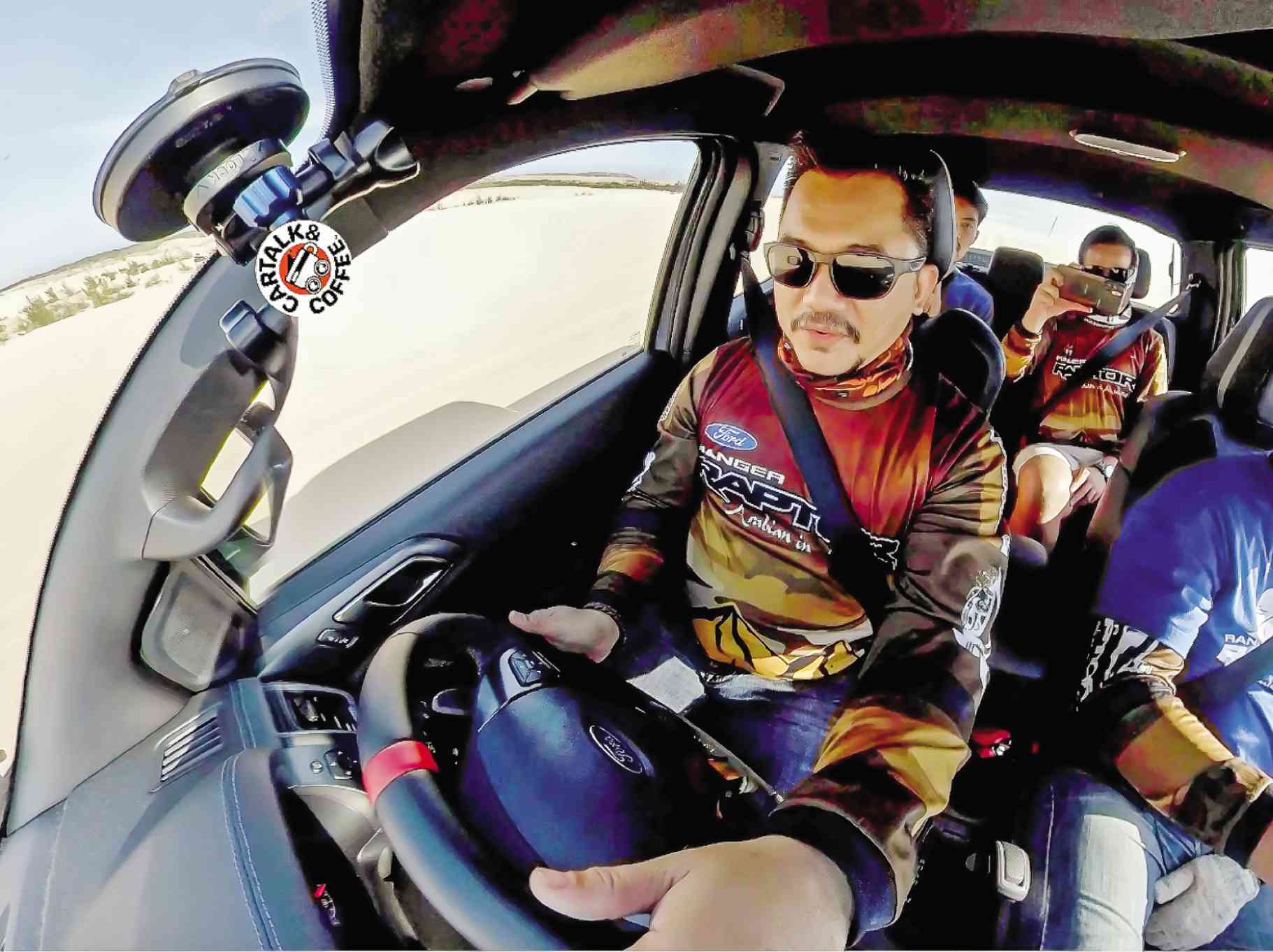 The author having a blast behind the wheel, whichever side it’s on

With all the Raptor’s “special powers” off the road, we weren’t surprised that it also had advanced active safety features and driving aids built-in that would be invaluable in a much more civilized setting, where it’d likely be used 90 percent of the time… the city. Stuff like Dual LED headlamps, Pedestrian detection, Pre-Collision Assist with Automatic Emergency Braking, and a Lane Keeping System… all designed to keep its driver and passengers safe in the concrete wilderness.

With its price point of just under Php 2 Million including significant add-on features for 2020, radically handsome styling that’s backed by unparalleled performance capabilities on or off the road, I wouldn’t hold back in saying that the among all the pickup trucks in the country and rest of the Asia-Pacific region, the Ford Ranger Raptor is indeed the dominant species. 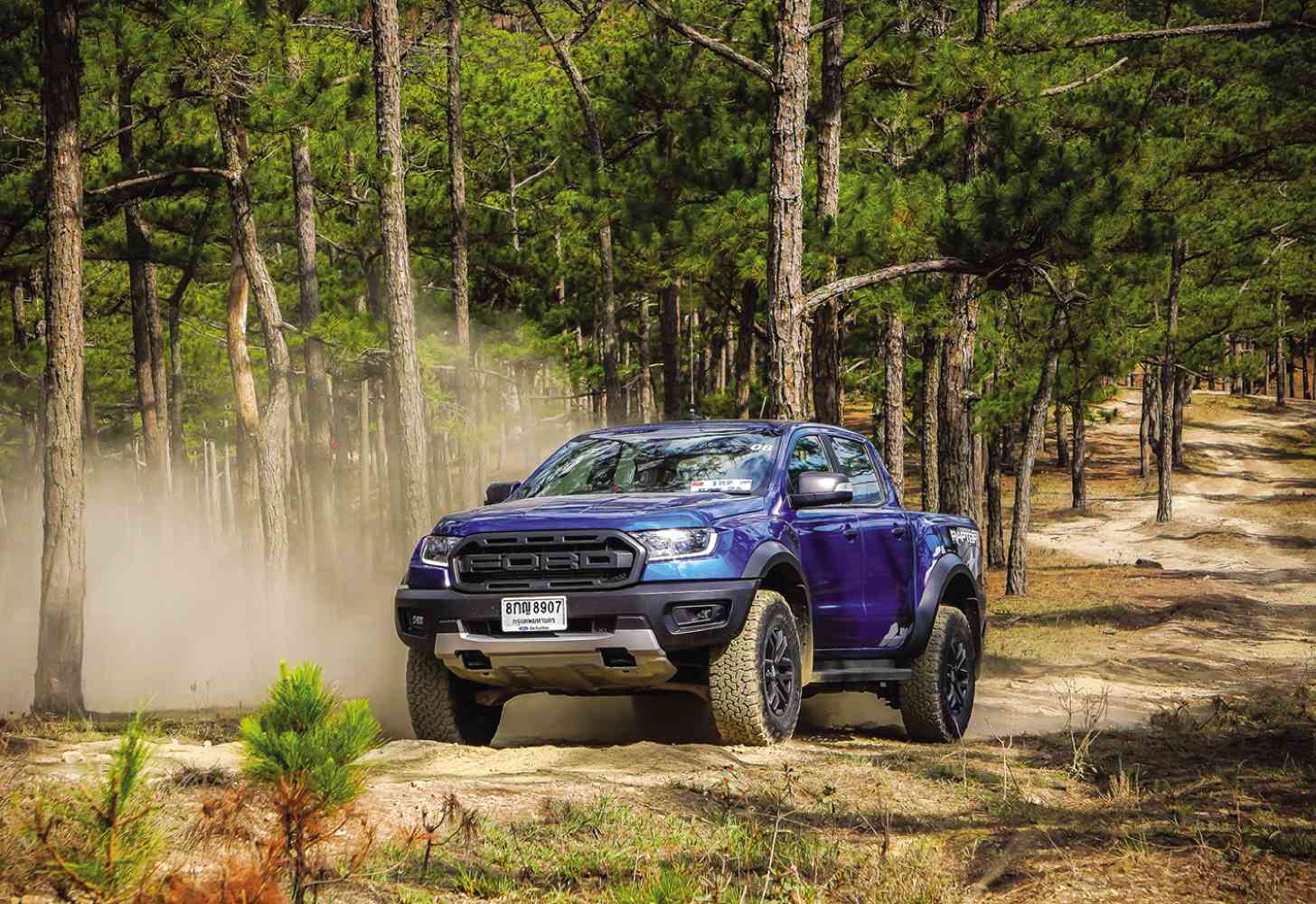 On Baja mode, one can experience dashing through moderate off-road terrain at 3-digit speeds, and with the Fox suspension, step out of the vehicle with your hairstyle perfectly intact as well 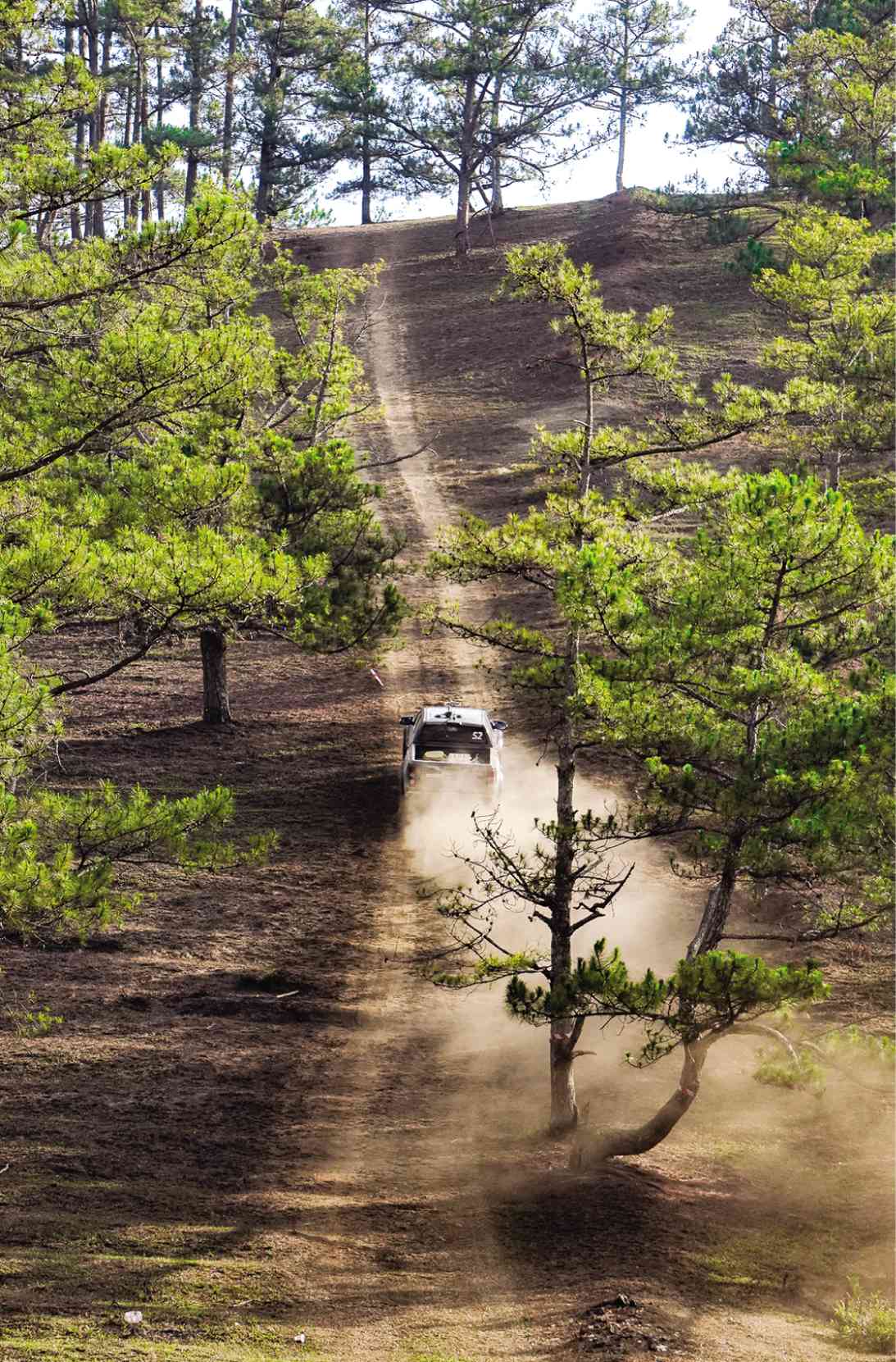 Churning out 500Nm of Torque from its 2.0L Bi-Turbo Diesel engine, traversing a steep slope is a cinch for the Raptor