Samar down the road 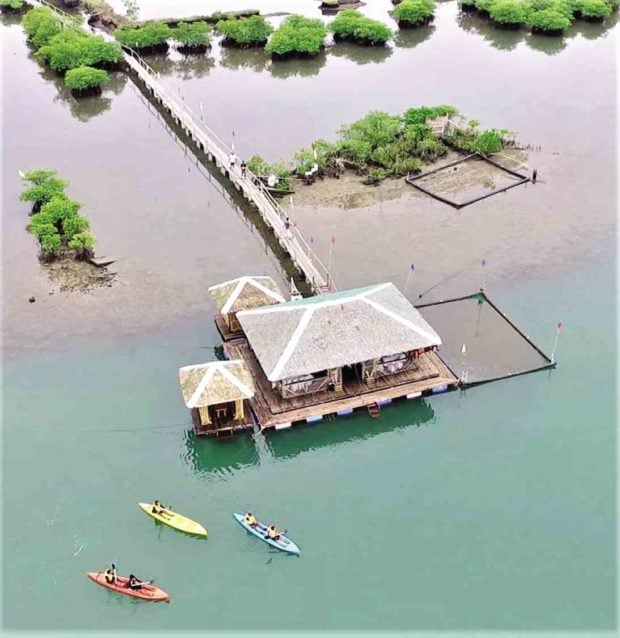 San Juan by the Bay Floating Cottages and Boardwalk

The recent declaration of the Covid-19 pandemic has thrown motorshows, car launches, travel plans, and even daily routines in disarray. But in this sunny southern archipelago, the safest place to be is in Mother Nature’s bosom for its unequalled therapeutic healing even in the worst virus outbreaks.

One such refuge is Samar which has been catching the attention of tourists and motorists in recent years, thanks to its natural wonders hidden in plain sight for so long. Thanks to the Spark Samar program of the provincial government which served as the plug which will make it a hotspot, and more than a passenger meal stop along the Maharlika Highway.

Just recently, the province unveiled its so-called “secret kitchens” which aims to recapture its rich culinary tradition and upgrade it for a bigger market. With a virtual frontier and mouth-watering food on arrival, a drive to “Samar down the road” is an exciting odyssey which will turn even Barry Manilow green in envy.

For hardcore motorists, Samar is a long overland drive via Bicol region, and a ferry ride across the San Bernardino Strait to Allen or San Isidro port in Northern Samar. You can also fly in via Tacloban and exit via Calbayog, or vice-versa, and just avail of vehicle rentals at the airport and drive along its Tandaya Trail, named after the province’s ancient name.

Pit Stop 1: Sta Rita. The gateway town on the other side of San Juanico Bridge, swing by San Juan by the Bay Floating Cottages and Boardwalk which has a panoramic view of the Strait. Stroll across the 400-meter bamboo bridge, paddle a kayak on the mangrove forest, dip at a contained swimming pen, nibble on local banana, carlang and camote chips, or feast on fresh seafood. What used to be just a snapshot on this popular bridge is now an activity-filled spot, courtesy of the community cooperative running the site. 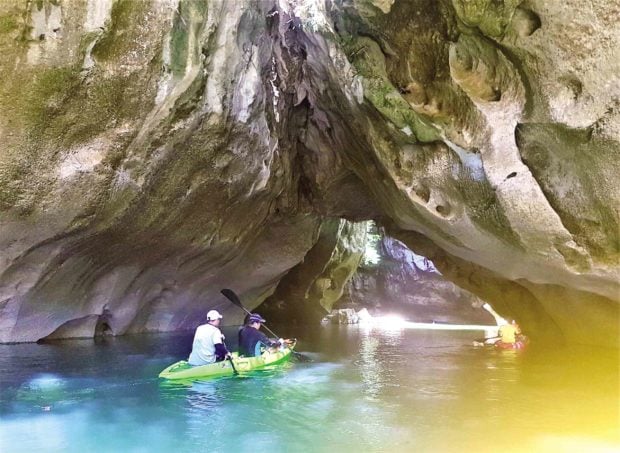 Pit Stop 2: Basey. East of Sta. Rita is the Sohoton Caves and Natural Bridge, an 841-hectare natural park which is perhaps the top tourist attraction in Eastern Visayas since it gained prominence in 1998. Its jumpoff point is a visitor center in Bgy. Wespal where orientation is given before the short river cruise begins. The cave boasts of mesmerizing glistening stalactites, stalagmites, pillars, caverns, and karst formations made more exciting by the witty tour guide commentaries.

A worthy side trip is Saob Cave where Basaynon women do the age-old native craft of weaving which produces exquisite functional and decorative mats and accessories. 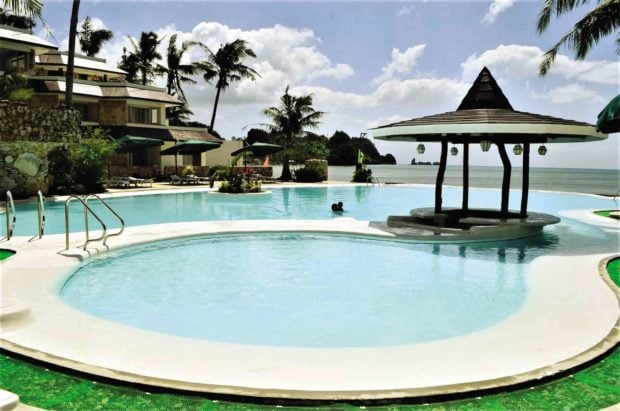 Pit Stop 3: Marabut. Further to the east is Marabut Rock Formation, a cluster of uninhabited islets punctuated by jagged limestones, pocket beaches, and saltwater lagoons enclosed by cliffs. These can easily be reached by outrigger boats or kayaks which can be rented from nearby Caluwayan Palm Island Resort.

Pit Stop 4: Calbiga. Drive back to the main highway in Sta. Rita, and then northward to this town, which is host to two top ecotourism sites you can visit, time permitting—Lulugayan Falls and Langun-Gobingob Cave System. 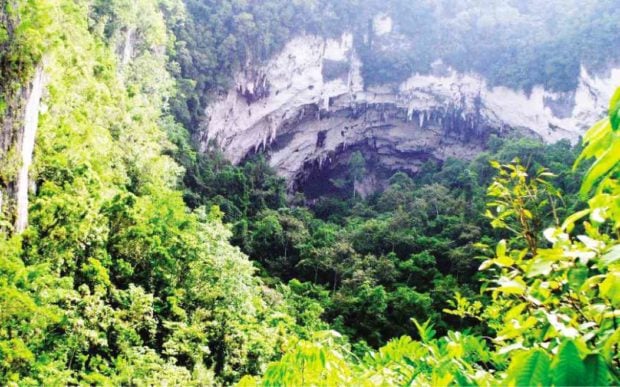 The former is a 15-minute drive from población, and can be accessed through a staircase and seen from a view deck. If the splashing cascades seem so enticing, feel free to frolic in the refreshing water.

The latter is among Southeast Asia’s best and most expansive cave systems which have made Samar the country’s caving capital. Langun-Gobingob is dubbed the “mother of all chambers,” being the largest of the 12 caves, measuring 270 x 160 meters, and is famous for speleothems and endangered species of bats, cave crickets, the eyeless fish, cave spiders, birds, snakes, and white and red crabs. Guides can give a “sampler” tour if only to give guests a taste of spelunking based on time availability.

Pit Stop 5: Paranas. About 14 km east of Buray junction is the DENR office in Bgy. Tenani, the entry point to the Ulot River Torpedo Extreme Boat Adventure, a 90-minute heart-pumping whitewater motorboat ride in the province’s “water highway.” This must-do tourist activity is within the 458,700-hectare biodiversity-rich Samar Island Natural Park, the country’s largest lowland forest, and is capped by a moderate jump at the river’s calmer section for a leisurely drift. 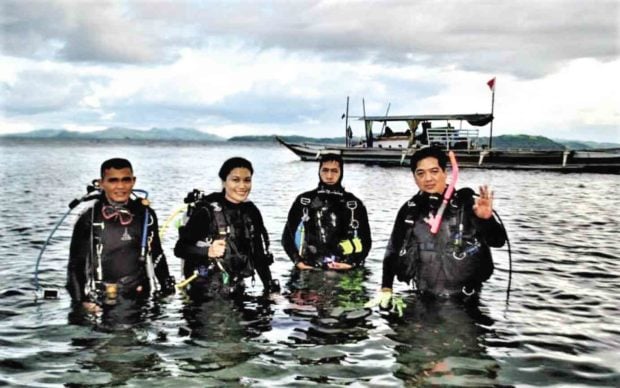 The columnist at Sampot Island in Catbalogan

Pit Stop 6: Catbalogan. This capital city is a growing urban center, and hub for land and sea transport, tourist establishments, and consumer services. Around the town proper, you can scout delicacies such as Bola Catalana meat loaf and the signature tamalos, which is tenderized and steamed pork liempo in peanut sauce, wrapped in banana leaves, Gandara’s keseo, an indigenous cottage cheese from fresh carabao milk, San Jorge’s latik and rice piñato, to name a few.

Within the provincial capitol complex is the Pasalubong Center for souvenirs, accessories and processed food sourced from all over Samar.

Hop around Sierra islands in Maqueda Bay which has fine pocket beaches, cliffs for diving, and remarkable marine life ideal for snorkeling. It is also a potential scuba diving site which this columnist explored with Philippine Army divers from Camp Vicente Lukban. 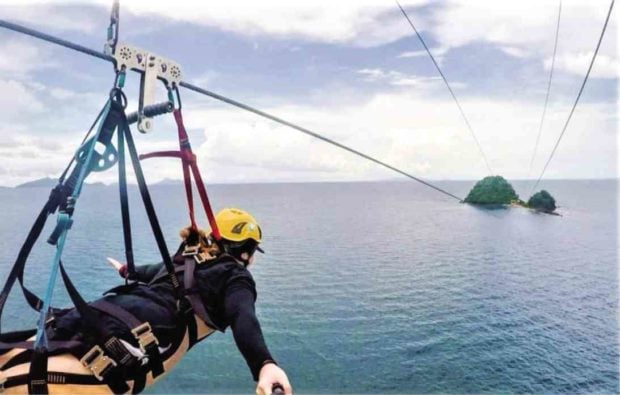 Pit Stop 7: Calbayog. 60 km north is this vast city regarded as the cradle of Samareño cultural heritage. For a glimpse of history, swing by Christ the King College which has an archaeological museum of artifacts, burial jars, Chinese porcelain, log coffins with skeletal remains, and religious items.

A new sensation is Calbayog Zip Line and Malajog Ridge Nature Park which glides 750 meters to Daraga Island above the cove.

Spend the night at the cozy Hotel Ciriaco, and feast on indigenous and all-time favorite food and drinks while watching the sunset on its poolside bar to conclude your long trip Samar out there.