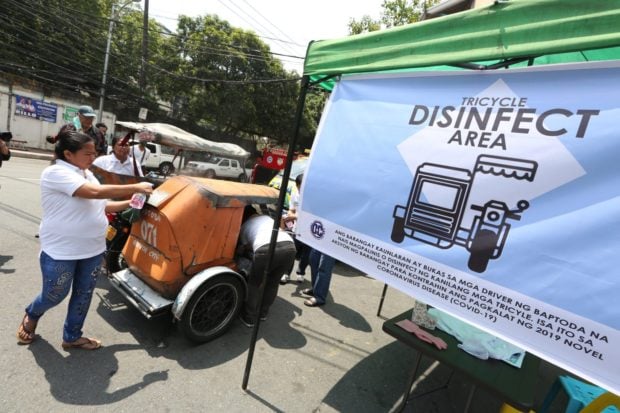 SANITIZING RIDES A “disinfection area” is set up especially for tricycles in Barangay Kaunlaran, Quezon City, on Saturday, hours before the start of the monthlong quarantine covering the entire Metro Manila. —NIÑO JESUS ORBETA

MANILA, Philippines — Those who attempt to enter and exit Metro Manila during the period of the “community quarantine” cannot be detained by law authorities, the Department of Justice (DOJ) said Saturday.

However, if a person assaults, slanders or bribes a law enforcement agent while trying to do so, that’s the time authorities can arrest him, Justice Secretary Menardo Guevarra added.

“No, just being physically prevented from entering or exiting,” Guevarra told reporters in a text message when asked if a person attempting to enter or exit Metro Manila will be arrested.

“But if the person assaults the law enforcement agent, or slanders him, or bribes him, then that’s cause for a warrantless arrest,” he added.

“Law enforcement agents can physically prevent actual movements (entry into or exit from Metro Manila) unless covered by the exceptions or on highly justifiable grounds,” the Justice Secretary explained.

As of Saturday, the country’s number of COVID-19 cases is at 64, with eight cases ending in deaths.

No ordinance, no arrest

During the period of community quarantine, authorities will also enforce a  curfew period from 8 p.m. to 5 a.m., as earlier announced by the Metropolitan Manila Development Authority (MMDA)

This way, the MMDA added,  the public will stay indoors and practice self-quarantine to contain the spread of COVID-19.

But will there be arrests made if a person violates the curfew period?

“Depende ‘yan sa local ordinance of the city concerned. Kung walang ordinance, no arrests (as in detention) can be made,” Guevarra answered.

(It depends on the local ordinance of the city concerned. If there’s no ordinance, no arrests [as in detention] can be made.) -By: Katrina Hallare