There are cheap China cars (there are over 1,000 registered car brands in China apparently), then there is the Geely Coolray, perhaps the most desirable looking, premium-feeling, clean and classy China-branded and China-made car on the market today.

Geely owns Volvo, and it looks like the parent company has been busy studying clean, aesthetically appealing design from the Swedes. The body lines are crisp, taught, well-formed and truly stylish that is universally appealing: slap any other foreign badge from Japan or Europe, and the Coolray would look just fine, proudly bearing its handsome exterior. A small spoiler in the rear gives it a sporty vibe, too, along with an aggressive front air-dam and a rear diffuser finished in faux carbon-fiber. Not exactly functional, but they do look really good, if a bit cheeky. Generous 18-inch wheels shod with Continental UC Ultra-Contact all-season touring tires sized 215/55R18 fill out the wheel arches well, and add a touch of even more class and sophistication. With a 2600 mm wheel base, the interior is roomy, with good legroom for rear seat passengers, and the 196 mm ground clearance should give most drivers extra confidence handling the parking lot trail, or running up the curbs to park. Crucially, it gives just an extra bit more of safety margin in the event of flash-floods in the metro. Lastly, the small 5.3 meter turning radius again makes the Coolray a perfect candidate when driving through tight city centers. 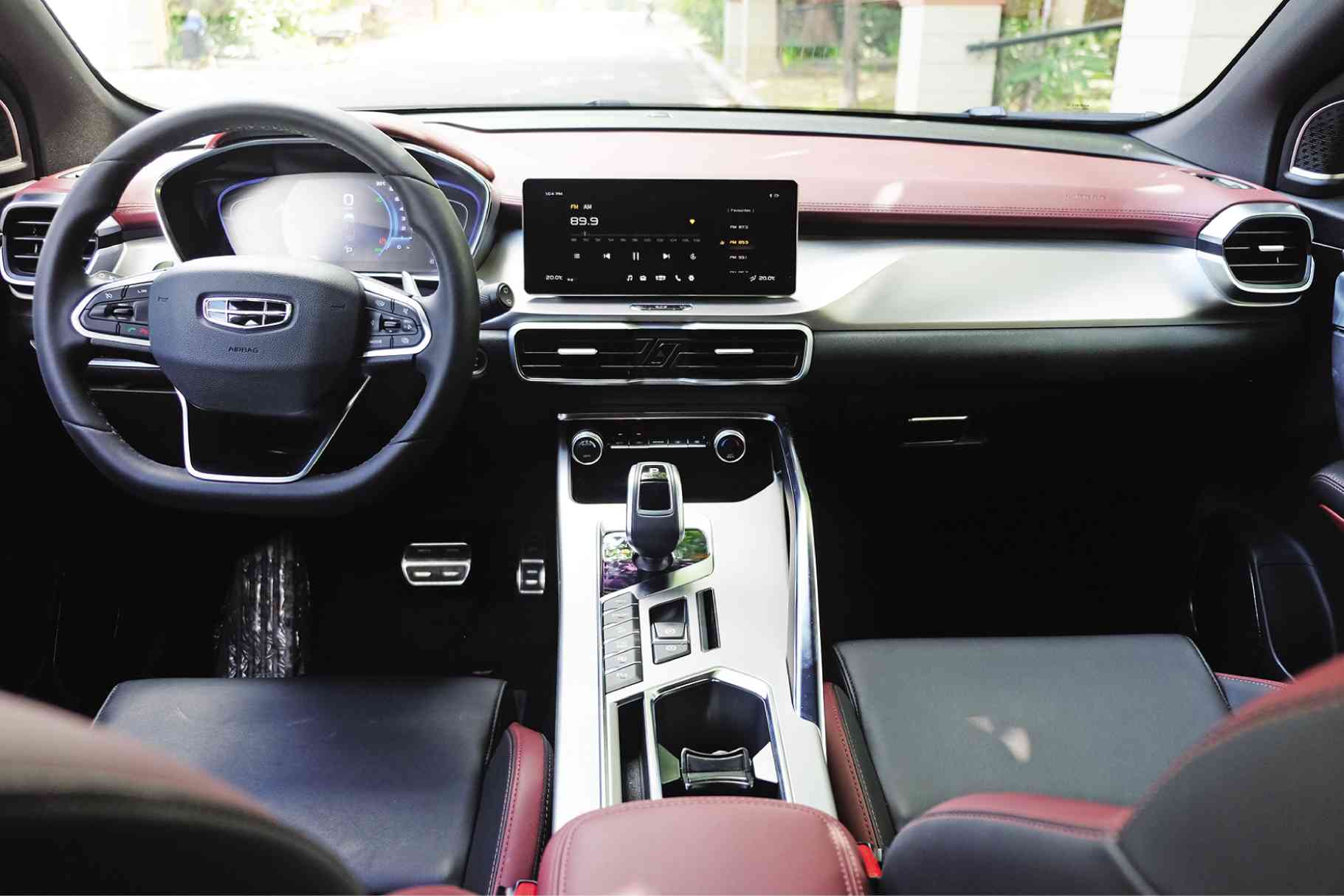 The crisp, clean and stylish lines find their way inside too: swathes of matte aluminum finish, contrast well with the black leather seats further brightened by red accents. The combination is more mature and sophisticated, but it works well. The instrument panel is a big LCD display, akin to what you’ll find in many modern European luxury marques, and the 7-speed dual-clutch transmission’s lever, along with the row of buttons looks very stylish as well, framed around even more matte aluminum trim. The dash also has its own 10.25 inch LCD screen which forms the brains of the infotainment system. The bird’s eye-view camera gives 360 around-view of the car which makes parking the already compact Coolray even easier in tight spots, perfect for the urban jungle. Unfortunately, there is no Apple Carplay or Android Auto, which would have made mobile phone integration much more seamless, but you can download the QD App to integrate your mobile phone device with the Coolray’s infotainment system. The trunk has a decent 330 liters of cargo space, but the interior’s piece de resistance has to be its panoramic glass roof which gives the Coolray a true air of luxury and modern cool.

Its beauty isn’t just skin deep: the engine is a powerful 1.5 liter 3-cylinder direct-injected turbocharged mill, delivering 177hp and 250 Newton-Meters of torque driving the front wheels. Six airbags are available on the top-spec model, along with ABS-EBD brakes as well as traction-stability control. It also has a blind-spot monitoring system for those kamikaze motorcycle riders who love to scoot past you at break-neck speeds.

On the open road, the Coolray is effortlessly easy: it’s not made for keen drivers seeking every last iota of performance. It delivers an easy, relaxing and surprisingly fast-paced progress thanks to the turbocharged engine and the seamless shifts from the jerk-free DCT. Four up, with luggage on a trip to Baguio is easily doable, not because of the space (or lack thereof), nor the power (or lack thereof, as the Coolray is more than fast enough). It’s the interior space and refinement where the Geely surprises, too. While some of my colleagues have reported a little more wind and tire noise above 80km/h, I found nothing beyond the norm, and could comfortably cruise all day going up and down Tagaytay at a constant 100km/h. Fuel consumption in the city was a very good 8.5km/liter, while highway driving netted an impressive 16km/liter on my round trip to Tagaytay from Metro Manila. With more mileage in the tight new engine, fuel efficiency, power and response should improve further. The steering is light and easy, the brakes light but easily modulated, and ride comfort is pliant enough on rough roads, but stable and confident enough on the highway. 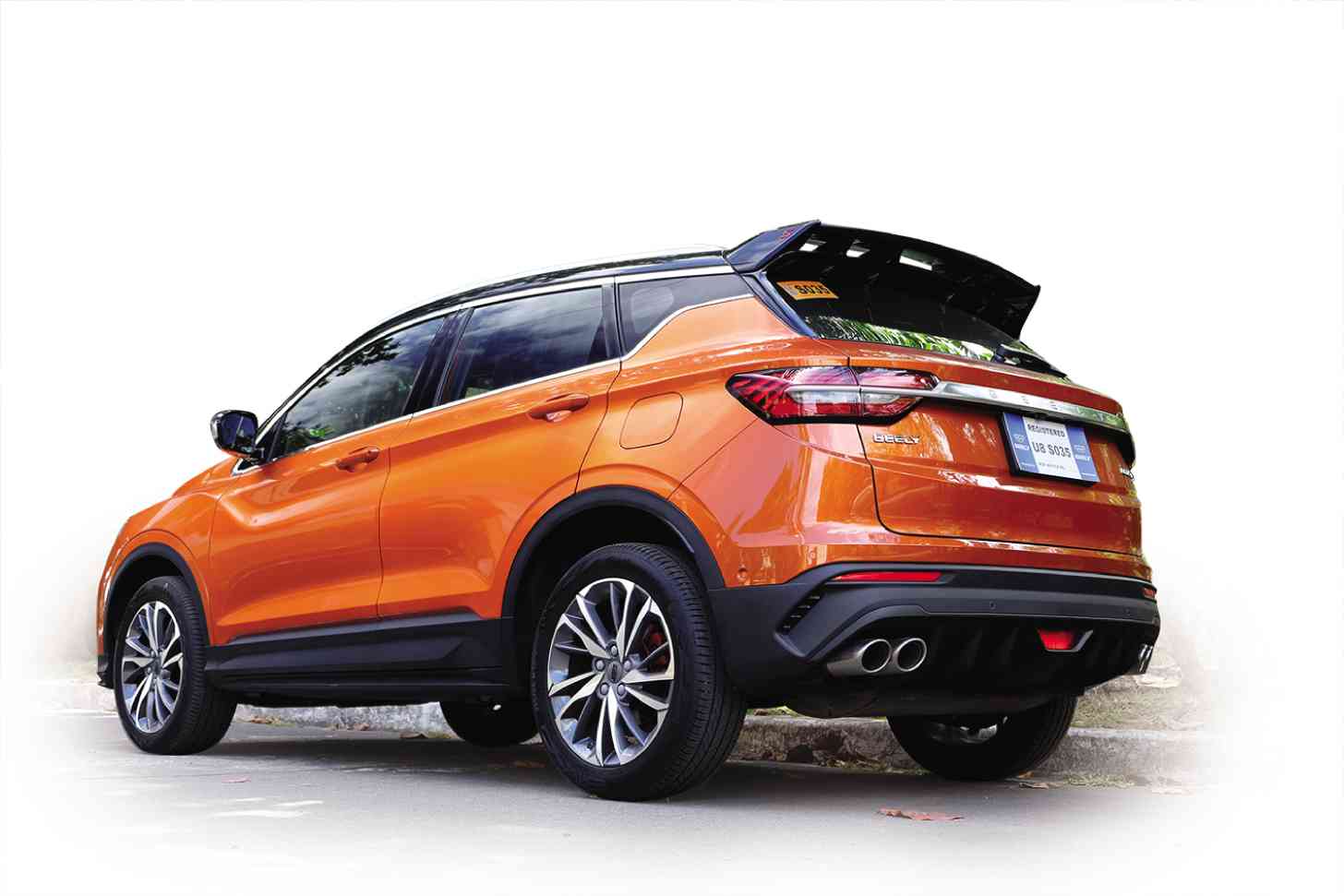 Geely has grown up, its technology has matured. Lead a blindfolded person inside, shuttle / ferry that person around and he or she wouldn’t think they were riding in a China-made and China-branded car. The fit and finish is excellent, China-car or not. Design is truly globally appealing, and the technology on-board would make many established Japanese brands jealous. Combined with a 5-year, 200,000 kilometer warranty (whichever comes first), it’s not long before Geely becomes a mainstream option, rather than a left-field alternative to the Japanese, American and Korean mass-market brands. At P1,198,000, it’s the deal you and I should really consider looking into.