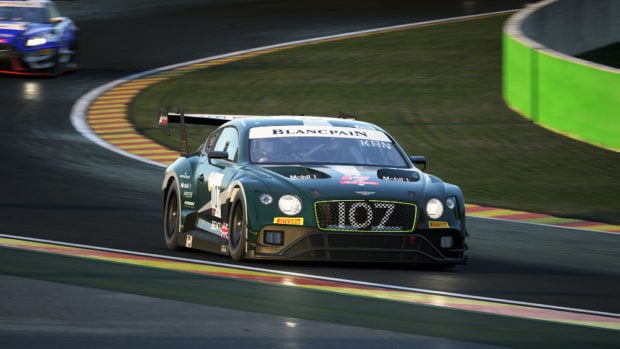 Despite the postponement of public events around the world—motor racing included—Bentley Motorsport still saw action on March 29 as four of the customer team’s Bentley Continental GT3s took part in a race.

As race drivers, engineers and fans around the world stay at home to slow the spread of COVID-19, many of them have turned to e-racing to get their motorsport fix.

The race featured 50 GT3 cars that battled it out for honors. Bentley works driver Al Buncombe, K-PAX Racing’s Andy Soucek, CMR’s Arjun Maini and JRM’s Martin Plowman each took to the “wheel” of a Continental GT3 in the one-hour sim race. The drivers represented four of Bentley Motorsport’s customer teams.

Prior to the event, Bentley drivers have worked closely with Bentley Motorsport’s technical team in developing the car. “While it is of course disappointing to have to postpone rounds of the 2020 racing season, the health and safety of everyone is paramount. So, we have taken the skill set of our motorsport department and put them into action in the virtual world,” said Bentley’s Director of Motorsport, Paul Williams.

He noted the team’s drivers and technicians were busy during the week leading up to the sim race as they worked on the setup of the virtual Continental GT3. Worth noting, Williams said, is that the virtual car’s lap time around Monza is representative of its real-world performance on the track.

“We applaud the team at SRO not only for their handling of the COVID-19 situation, but for quickly putting on a charity event with such an impressive entry list,” Williams said.

“We are a very tight-knit community and, as well as giving us our motorsport fix, it’s allowing us all to come together and give our very loyal fans some racing to enjoy. We’ve worked really hard on the set-up this week; the level of preparation and effort has made it feel like a real world race week!” he said.