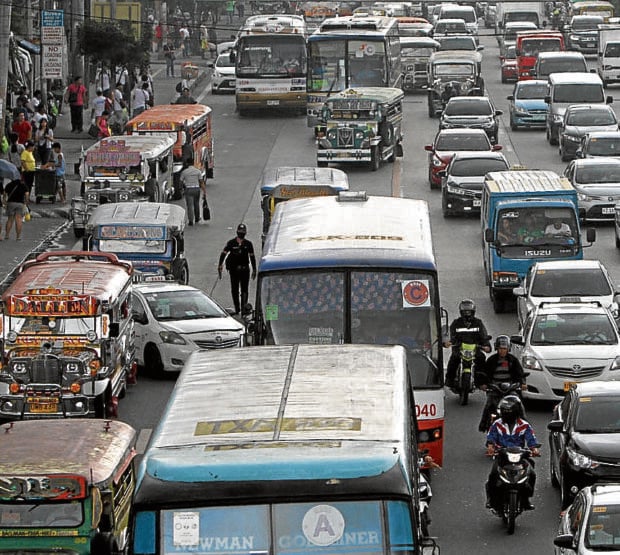 URBAN ESSENTIALS The economy can’t be possibly revived without public transport, according to a transport sector analyst. —INQUIRER FILE PHOTO

MANILA, Philippines — Banning buses and jeepneys after the national capital shifts to a general community quarantine (GCQ) would be “catastrophic” for an economy on the verge of a crisis, a transport economist warned on Wednesday.

Jedd Ugay, chair of the commuter group AltMobility PH, was reacting to a recommendation made on Tuesday by the 17 mayors comprising the Metro Manila Council to relax quarantine regulations but continue to restrict public transportation in the nation’s political and economic center.

“We think it’s a catastrophic level because it’s an impending economic crisis,” Ugay told the Inquirer.

“You cannot resume the economy without mobility. If there is no public transport and no dedication for active transport, many will lose their jobs or suffer wage cuts because they would be coming in late for work,” he said.

“In terms of the gross domestic product, a big chunk of productivity will be lost, and of course there will also be the issue of income inequality because many will lose their jobs,” Ugay said. “The poor will again be vulnerable in this situation.”

Ugay cited a study by MoveAsOne, a nationwide transport coalition, that said around 1.49 million people would be affected by the lack of public transport in Metro Manila. About 20 percent, or 298,800, stand to lose their jobs permanently because of restricted mobility.

That would result in P504 million in economic losses per day, according to the study. This doesn’t even take into account the 107,309 transport-related jobs (bus and jeepney drivers, among others), that could be lost because of the ban, said Ugay.

These are just conservative assumptions, he warned.

“There might be more people who could be displaced because they would have to comply with social distancing, so more (transport) operators might not even break even,” he said.

Jojo Garcia, general manager of the Metro Manila Development Authority, said the mayors feared that physical distancing may not be maintained in public modes of transportation.

Garcia, who met with the Metro Manila Mayors on Tuesday, said point-to-point buses and shuttles by private companies were also fine.

It would be hard to keep tabs on the movement of passengers in jeepneys and buses operating stop-and-go “unless we have disciplined the people on the proper ways of riding or disembarking from these,” he said.

Physical distancing would have to be observed at transport terminals and inside the vehicles, he said.

Ensuring that this will followed is easier in taxis, tricycles and ride-hailing vehicles, he added.

During their virtual meeting on Tuesday, the Metro Manila mayors unanimously proposed relaxing restrictions across the capital region, arguing that the country’s commercial center could no longer afford to stay closed.

“We cannot do this (quarantine) forever,” Garcia told reporters after the mayors’ meeting. “Not even first-world countries had lockdowns that went on for two months. If we continued to do this, more people would have died of hunger.”

The ban on buses and jeepneys would be imposed for two weeks, he said, without elaborating.

Mobility in the metropolis would be similar to what is being allowed under the current modified enhanced community quarantine (MECQ), which also bans public transport.

The Department of Transportation said the four railways in Metro Manila (Light Rail Transit 1 and 2, Metro Rail Transit 3 and Philippine National Railways) could be operated starting on June 1 but at a much-reduced capacity of only 10 to 13 percent. The trains would add to the tricycles, taxis and ride-hailing vehicles in moving people around the metropolis.

One problem for Metro Manila is that 88 percent of households do not own a car, according to Ugay.

“What about their mobility? If workers are being eased back and public transport is still banned or not fully operational, how would they go back to work?” he said.

“The potential result here is, [without] people being able to access their workplaces, then even the companies won’t be able to provide the goods and services needed to restart the economy,” he added.

Even assuming that only 30 percent of these trips resume under GCQ, that equals to 10.5 million trips that need to be served by public and active transport such as walking or cycling, Ugay said.

Extending the public transport ban further could only disenfranchise both the workers (who cannot afford to buy a bicycle or a car) and small and medium enterprises incapable of providing free shuttle services for their employees, he said.

Jeepney drivers are suffering from the three-month transport stoppage, according to Pasang Masda chair Obet Martin.

“Even now a lot of us haven’t received any amount from the Department of Social Work and Development’s social amelioration program, and that’s all we can rely on to survive,” he said.

It’s also “very unfair” that other areas under GCQ had allowed public transport while jeepneys are banned in Metro Manila, he said.

He said drivers were “very willing” to follow guidelines such as physical distancing just to get back to work.

“They want to reopen the economy but refuse transport for workers. What is the justification for this?” Martin said.

To ease the transport restrictions, Garcia said a modified number coding scheme may be imposed in Metro Manila when it shifts to GCQ.

He said motorists would be allowed to use their vehicles during their number coding days on condition that there must be one other passenger with them.

Doctors, nurses and other emergency workers who would have no passengers on their coding days would not be apprehended, he said.

—By: Krixia Subingsubing, With a report from Leila B. Salaverria