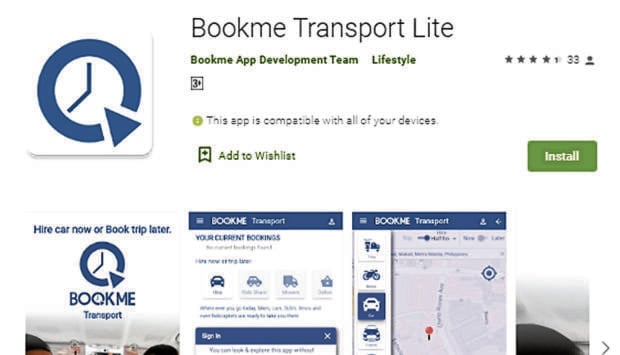 ILLEGAL APP At press time, the BookMe Transport app was still available for downloading on the Google Play Store.

MANILA, Philippines — With the ban on public transport still in place in Metro Manila due to the new coronavirus disease (COVID-19) pandemic, a fledgling transport app accepting booking requests from commuters was flagged on Wednesday by the Land Transportation Franchising and Regulatory Board (LTFRB).

According to the LTFRB’s initial investigation, BookMe Transport Lite, which is still up on Google Play Store, is being used by commuters to book or hire vehicles ranging from tricycles to moving trucks — a service currently banned by transport officials — in areas still under modified enhanced community quarantine (MECQ).

The app also offers through BookMe Lifestyle other services such as massage, nail, hair, cleaning and laundry, among others.

The LTFRB warned that the app was not authorized to operate because it did not have the necessary permits, and with Metro Manila still under MECQ, public transportation — except for tricycles in some areas — were not allowed to operate.

It asked the public not to use the app whose owners could be charged with violating protocols set by the Inter-Agency Task Force (IATF) on the Management of Emerging Infectious Diseases and Joint Administrative Order 2014-1.

According to Memorandum Circular No. 2020-18, only transport network vehicle services (TNVS) with valid certificates of public convenience or provisional authorities are allowed to ply the roads in areas now under general community quarantine.

In places under MECQ, only the IATF which is in charge of national strategies against the pandemic can approve the operations of TNVS and other forms of public transportation. – By: Krixia Subingsubing