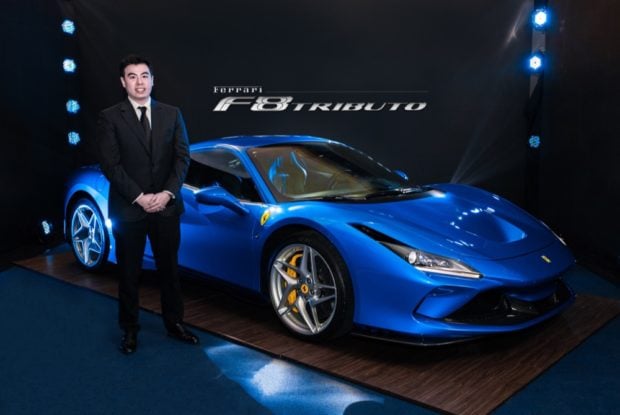 Motostrada, the country’s official and exclusive dealer of Ferrari in the Philippines, held a virtual online launch of the Ferrari F8 Tributo via its Ferrari Philippines Facebook page. “From outstanding performance, speed, and excellence, the racing legacy of Ferrari has brought a unique and exclusive experience to car enthusiasts in our country. Today, we at Motostrada have unveiled the illustrious Italian company’s latest and fastest sports car to-date — the Ferrari F8 Tributo.” Wellington Soong, Motostrada Chairman Emeritus, said.

Soong, who is no stranger in the premium automobile market, pioneered several luxury car distributorships and Inquirer Motoring reported that he formed an alliance with businessman and President Duterte supporter Dennis Uy in 2018 for a stronger Ferrari and Maserati presence in the market. Last June, it was also reported by Inquirer Motoring that Mody Llamas, Jr. will now head the Ferrari Philippines operations as president of Motostrada while Sam Verzosa will be heading the Maserati Philippines operations as president for Modena Motorsports Inc. These two gentlemen are the people behind Front Row, one of the biggest multi-level marketing groups in the country known for using high profile celebrities as its brand ambassadors. 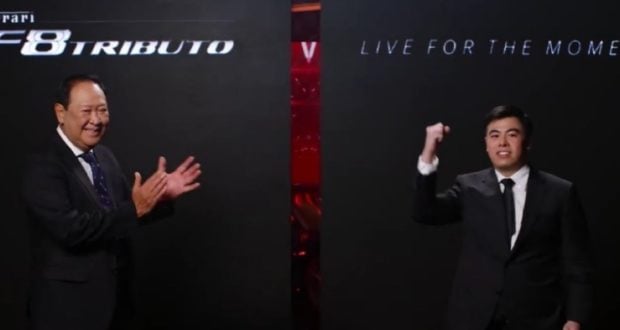 According to Motostrada, the launch of the latest V8 Ferrari model reflects the company’s and Ferrari’s strong ties and commitment to grow the Ferrari brand in the Philippine market, by offering the full model range and the aftersales support to the customers.

“As the official and exclusive dealer of Ferrari in the Philippines, we fully embrace the values that Ferrari upholds. Expect that our integrity and quality of service are particularly met with the standards set by Ferrari. The iconic release of the Ferrari F8 Tributo here in our country perfectly mirrors Motostrada’s direction: to be the leader in automotive innovation, unafraid of fusing the historic past and the revolutionary future for the ever-growing and exclusive Ferrari community.” Mody Llamas Jr., Motostrada President, said. 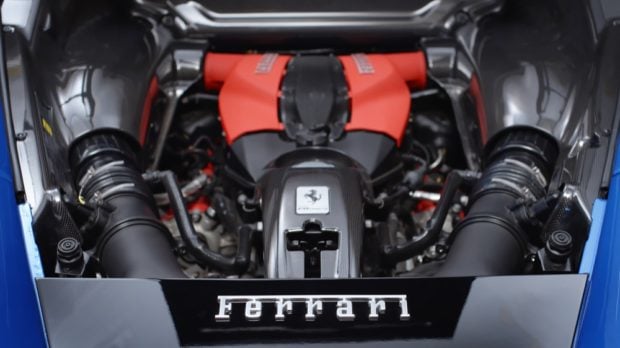 The virtual launch of the F8 Tributo was earlier slated last June but with the new transition of the incoming executives, the group decided to postpone the launch and timed the launch at a later date. The F8 Tributo is the brand’s new mid-rear-engine sports car that represents the highest expression of the Prancing Horse’s classic two-seater Berlinetta. It is a car with unique characteristics and, as its name implies, is an homage to the most powerful V8 in Ferrari history.

The F8 Tributo replaces the 488 GTB and, in the range, and Ferrari intends to set the market benchmark for performance, driving pleasure and ease of handling. It makes the exhilarating performance of the best 8-cylinder in the world accessible to all drivers, with unprecedented handling and superior ride comfort according to Ferrari.The engine is also the most powerful V8 ever to be mounted in a non-special series Ferrari, achieving new heights not just for turbos, but for engines across the board.

Its turbocharged V8 engine, which was already been used in other models in the range at various power output levels, won the “Best Engine” in the International  Engine of the Year for three consecutive years from 2016 to 2018 and was also awarded the title of the best engine of the last two decades.

The F8 Tributo’s engine is so linear that it delivers power without the slightest hint of turbo lag and produces an evocative soundtrack. Instantaneous power is matched by exceptional handling thanks to the integration of state-of-the-art aerodynamics solutions derived from Ferrari’s track experience. Designed by the Ferrari Styling Centre, the F8 Tributo is essentially a bridge to a new design language that will continue to emphasize Ferrari’s key characteristics of high performance and extreme aerodynamic efficiency and is considered to be the most aerodynamically efficient series-production mid-rear-engined Berlinetta ever designed.