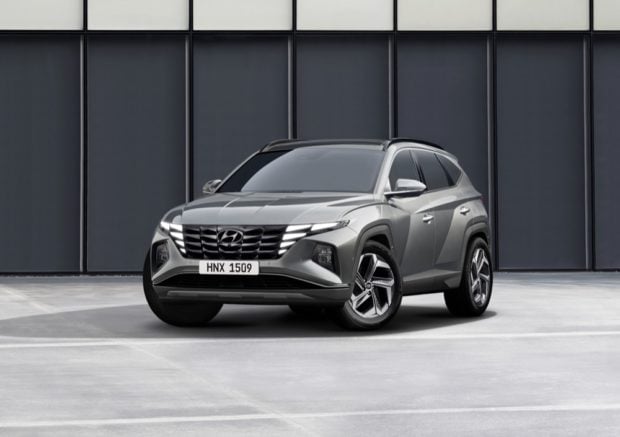 Hyundai Motor has unveiled the all-new Tucson, which features an advanced, experimental design and state-of the-art technology, setting new standards in the compact SUV segment. In addition, it offers the most electrified powertrain line-up in its class, underscoring Hyundai’s commitment to clean driving, while retaining its true SUV character. Here’s the news from Hyundai:

The all-new Tucson is the fourth generation of Hyundai’s successful best-seller with more than 7 million units sold around the globe since it launched in 2004. Of these, 1.4 million units have been sold in Europe. That makes it the company’s bestselling SUV globally. Hyundai’s new compact SUV arrives on the market with a revolutionary and ambitious new look that follows the company’s new Sensuous Sportiness design identity. 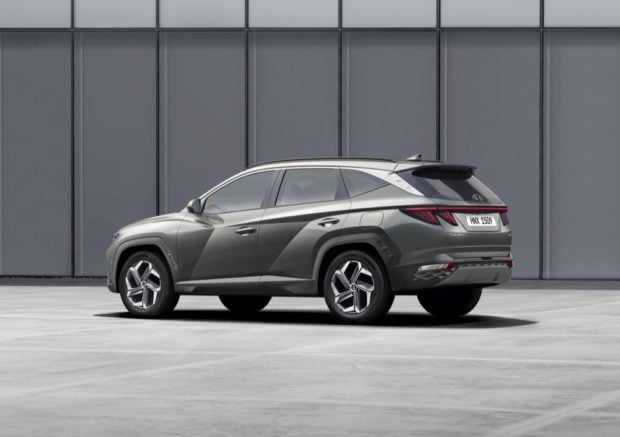 By offering the most electrified powertrain line-up in the compact SUV segment, including hybrid, plug-in hybrid, and 48-volt mild hybrid options, the all-new Tucson completes the electrification of Hyundai’s SUV fleet in Europe. Other electrified SUVs produced by Hyundai include the fully-electric and hybrid versions of the Kona, NEXO, its second-generation fuel cell electric vehicle, and the Santa Fe with hybrid and plug-in hybrid options on top of the line-up. By introducing electrification to its latest models, Hyundai consolidates its position as the manufacturer with broadest range of electrified powertrains.

The all-new Tucson is a global model. It will be produced in several factories worldwide, and will become the third-generation of the model to be produced in Europe at the Hyundai Motor Manufacturing Czech (HMMC) production plant in Nošovice, Czech Republic.

‘Parametric Dynamics’: a revolutionary and unique exterior at the cutting-edge of SUV design
Rather than simply an evolution of the previous generation model, the all-new Tucson represents a revolution for Hyundai in design terms. Overall, it features a bigger and wider body than its predecessor. Its muscular stance combines sharp angles and dynamic proportions with rich surfaces, ensuring a progressive look without compromising on Tucson’s rugged SUV heritage.

The all-new Tucson is the first fully-changed Hyundai SUV to be developed according to the company’s new “Sensuous Sportiness” design identity. This direction is characterised by the harmony between four fundamental elements: proportion, architecture, styling and technology. Its purpose is to bring a sensuous and emotional touch to Hyundai vehicles, realised by innovative technology and solutions.

“The mission of ‘Sensuous Sportiness’ is to elevate the emotional qualities of automotive design. We want our customers to feel moved. With the all-new Tucson, we are introducing its ultimate evolution and a definitive statement about Hyundai’s unstoppable forward momentum,” said SangYup Lee, Senior Vice President and Head of Hyundai Global Design Center. “Tucson’s advanced, experimental design is true to its pioneering spirit and raises the game in the industry’s most competitive segment.”

The progressive design language of the all-new Tucson was inspired by Hyundai’s Vision T SUV concept, which was unveiled at 2019 AutoMobility LA. Also guided by Sensuous Sportiness, Vision T’s design themes revolve around the concept of Dynamism and represent an “urban adventurer” SUV design direction.

The most prominent display of these parametric jewels is on the vehicle’s front grille, where Parametric Hidden Lights provide a strong first impression. When the lights are off, the front of the vehicle appears covered in dark, geometric patterns, with no distinction between the signature LED Daytime Running Lights (DRLs), which are seamlessly integrated into the grille. Thanks to state-of-the-art half-mirror lighting technology, when the DRLs are switched on, the dark chrome appearance of the grille transforms into jewel-like shapes, bringing an eye-catching element to an otherwise sleek appearance.

Parametric jewels also feature as a prominent design element on the side of the vehicle. Chiseled surfaces create a striking contrast between a sleek silhouette and masculine wedge, suggesting forward motion even when standing still. Taut athletic shapes seamlessly merge into angular wheel arches, where alloy wheels provide a powerful and dynamic stance. The Tucson’s sporty sensibility is accentuated through a chrome accent line with an edged parabolic shape, starting on the side mirrors and continuing all the way to the C-pillar. From the side view, the wrap-around doors are complemented by a sharp and bold side character line, which sits in harmony with the robust and rugged look of the dynamic and angulated wheel arches.

On the rear, wide tail lamps with parametric hidden light details continue the design theme. The all-new Tucson’s rear bumper also integrates parametric pattern details with a three-dimensional effect, coupled with a sporty garnish. It is the first Hyundai model to apply hidden rear wipers, which sit under the spoiler. High-tech design elements are crowned by a smooth glass Hyundai logo, which looks three-dimensional but actually does not protrude from the outer surface, in a departure from traditional automotive manufacture emblems. 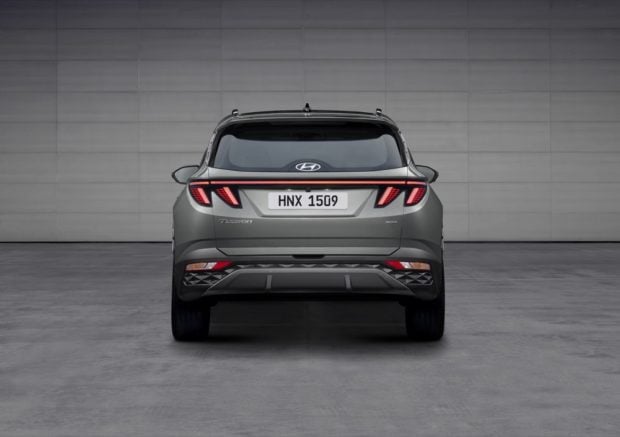 For the first time in a Hyundai vehicle, the all-new Tucson’s hidden type Multi-Air Mode technology consists of a combination of direct and indirect air vents for air conditioning and heating to create a more pleasant indoor environment with more gentle air flow. When this mode is activated, the air is dispersed to the newly added multi-air slots in the front, in addition to the normal air vents. The overall wind volume remains the same, and is therefore just as effective at changing the temperature, but the dispersion of wind reduces direct air contact and softens the air. This mode can be switched on and off based on the preference of the driver.

In addition, with Walk-in Device drivers can slide and recline the passenger seat for the convenience of front- or rear-seat occupants with the simple use of a button on the seat’s bolsters.

Rear Sleeping Mode allows the driver’s row to listen to their selected audio without the same audio being transmitted to the rear speakers, so that passengers who are sleeping will not be disturbed.

For improved user convenience, the rear seats of the all-new Tucson can now be folded in a 4:2:4 ratio. Remote Folding furthermore allows the seats to be folded at a distance. The folding levers are located on the side walls of the boot. 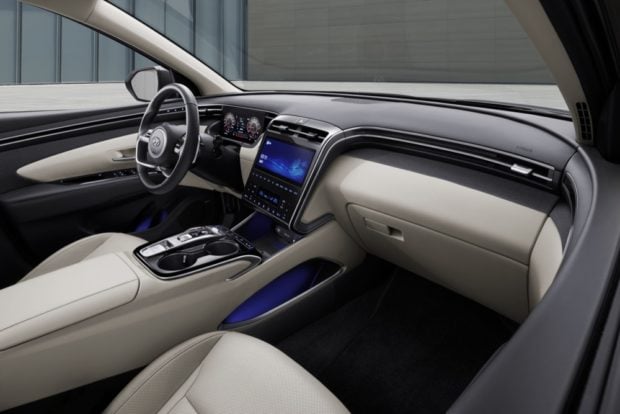 Increased roominess
The all-new Tucson’s dynamic proportions and new platform provide a wide, open interior space that guarantees occupants comfort and roominess usually reserved for models in the segment above. At 20mm longer, 15mm wider, and a wheelbase that has been increased by 10mm as compared to the previous generation, the all-new Tucson is more spacious than ever before. As a result, rear passengers can enjoy 26mm of additional legroom. This has been achieved for both the hybrid and internal combustion engine models, due to a clever placement of the battery underneath the rear passenger seats. Meanwhile, boot space has been increased by 33 to 107 litres, depending on the chosen trim and powertrain, offering up to 620 liters overall for luggage with the seats up and up to 1,799 litres with the seats folded.

The all-new Tucson was developed to reduce emissions without compromising on being fun to drive. The hybrid version consists of the new 1.6-litre T-GDI (turbocharged gasoline direct injection) Smartstream engine and a 44.2 kW electric motor, with a 1.49 kWh lithium-ion polymer battery. It is paired with a six-speed automatic transmission (6AT) and available with two-wheel or four-wheel drive. The system is the most powerful in the all-new Tucson’s powertrain line-up, with a combined output of 230 PS power, meaning it offers low emissions without compromising on driving fun.