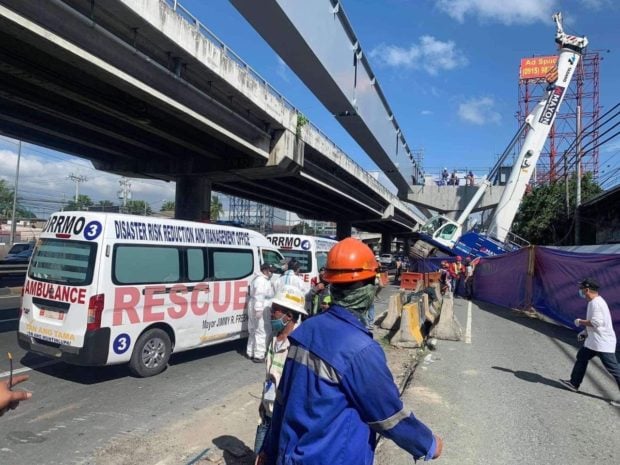 MANILA, Philippines — San Miguel Corp. (SMC) president and chief operating officer Ramon Ang on Sunday apologized to the victims and families of the accident at the Skyway Extension project site in Barangay Cupang, Muntinlupa City, and assured that the company will be providing assistance.

Ang said that even though project contractor EEI Corporation was the one handling the construction of the project, SMC, as project proponent, is responsible for the welfare of the victims.

“Even with a contractor handling construction, ultimately, we are responsible for the welfare of those who were affected. I would like to personally apologize to the victims and their families, as well as to our larger community in Muntinlupa,” Ang said in a statement.

The accident on Saturday morning was caused by a crane that tipped over as it moved into position, which then hit a steel girder causing it to fall on six vehicles. One person died while four others were injured because of the mishap.

“This terrible and tragic accident has affected me in ways I can’t even begin to express. I have not stopped thinking about the people who were affected, the four that were injured, and most especially, the person who perished, and his family. There are no words that can ease the grief of losing a loved one,” said Ang.

“To the family, I can only offer my sincerest and deepest condolences and my personal assurance that your family will be taken care of. To those who were injured, please be assured we will provide all the means necessary for you to recover and restart,” he added.

Ang also assured that the incident will be investigated thoroughly and that SMC and EEI will make sure that “even stricter” measures are in place at the project site.

Nevertheless, Ang said that in such a major project, there are many “redundant” safety measures set in place.

“Unfortunately, we can’t predict every outcome, and I’m sure no one wanted this to happen,” the SMC president said.

“Regardless, we are working with authorities to determine the root cause of this incident. We will find out where lapses occurred and do whatever is necessary to help make sure they don’t happen again,” he added. -By: Cathrine Gonzales