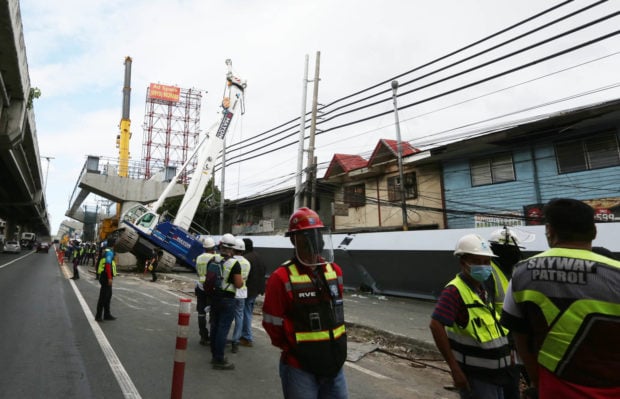 November 21 2020
A crane lies tilted along the East Service road in Cupang, Muntinlupa after the steel girder it was carrying fell into passing vehicles leaving at least 1 dead and 3 others injuired on saturday morning. The steel girder, spanning the length of two electrical post, was part of a skyway being built in the area when it crashed into 3 vehicles and 2 motorcycles.
INQUIRER/ MARIANNE BERMUDEZ

MANILA, Philippines — Clearing operations are ongoing where a steel girder from a portion of the ongoing Skyway project fell on the East Service Road in Muntinlupa City.

In a video taken by Radyo INQUIRER on Tuesday, workmen could be seen conducting clearing operations along the East Service Road in Brgy. Cupang.

No heavy traffic was noticeable along the affected area.

A motorist was killed while four others were injured after a steel girder fell on vehicles passing on the East Service Road on Saturday morning.

Among those affected were three cars and two motorcycles.

San Miguel Corp. (SMC) president and chief operating officer Ramon Ang earlier apologized to the victims and families of the accident and assured that the company will be providing assistance.

Labor Secretary Silvestre Bello III has ordered a labor safety inspection of the Skyway extension project after the construction accident. -By: Daphne Galvez