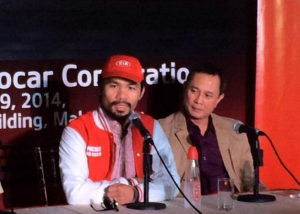 Kia is going all-out with its upcoming Philippine Basketball Association (PBA) team, and it has now hired eight-time world boxing champion Manny Pacquiao as its head coach. On Monday, in a press conference held at the Pacific Star Building in Makati, Columbian Autocar Corporation (CAC), Kia distributor in the Philippines, announced the appointment. Pacquiao moves from being an eight-time world boxing champion to Congressman and now a head coach.

“I’m very happy to be named head coach of Kia,” said Pacquiao, who was fitted with a red and white Kia jacket with his name and his new title “head coach” emblazoned at the front.

“I really like basketball. Even though I have many accomplishments in boxing, basketball is still in my heart,” said the Saranggani representative.

Asked how he will be able to balance his time, “just time management and self-discipline I’ll be able to handle that,” Pacquiao said.

There has also been speculation whether Pacquiao himself will be on the hardcourt, a la Robert Jaworski, a stalwart for the Toyota team in the 1970s. As for lacing up a pair of basketball shoes, the 35-year-old Pacquiao said he’s just focused with coaching in the meantime.

“As of now, I am head coach. As for playing, we still don’t know that. My focus is in coaching, to get good players and organize a would-be great team,” he said.

Pacquiao added he is open to the possibility of being a playing-coach even if league Commissioner Chito Salud stressed that everyone must enter the draft to be eligible of playing.

“These past few weeks there have been so many comments, so many concerns regarding Manny’s possibility of joining the PBA and many of these concerns, have been expressed in my mind to protect the interest genuinely of our national treasure Manny Pacquiao,” said Salud.

“But I think what we’re missing here is what does Manny really bring to the table in so far as the PBA is concerned? Of course there’s the wow factor, there’s the point of interest, pulling power of Manny Pacquiao. But I want to emphasize that Manny is the embodiment of what the PBA is striving to stand for. And what is that? Highest degree of excellence and sportsmanship with regard to fan and public interest,” Salud added.

With report by Mark Giongco