Watch Your Car files: Apple unveils Watch that may replace your car key 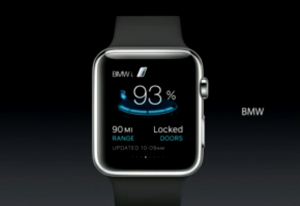 Apple has announced its wearable gadget, the much-hyped Apple Watch. The line of squarish watches, available in two sizes (38mm and 42mm), will have steel, aluminum or gold-plated cases, with bands that can swapped out. Among the features highlighted in the launch was its interactivity with a car. The BMW i app was shown, with the car able to display the charge level for a BMW electric car. It could also remember where the car was parked, and guide the owner back to the space. The Apple Watch could replace car keys, as the Watch is already geared to replace a hotel key and to make payments, replacing a physical credit card. The watch has sensors to monitor heart rate and other health parameters, which could be very useful to automotive-related safety. (Remember the man who had a heart attack and crashed three stories from a parking building?) Apple CEO Tim Cook says, “We set out to create the best watch in the world.” 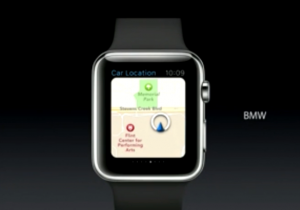 Apple Watch requires an iPhone for it to work, and will be available in the US starting in 2015, at a base price of $349. Details like battery life and shock and water resistance were not stated. It opens up a new category for the company, its first since the iPad launched in 2010.