MINI Cooper interprets the shooting brake in the 2016 Clubman 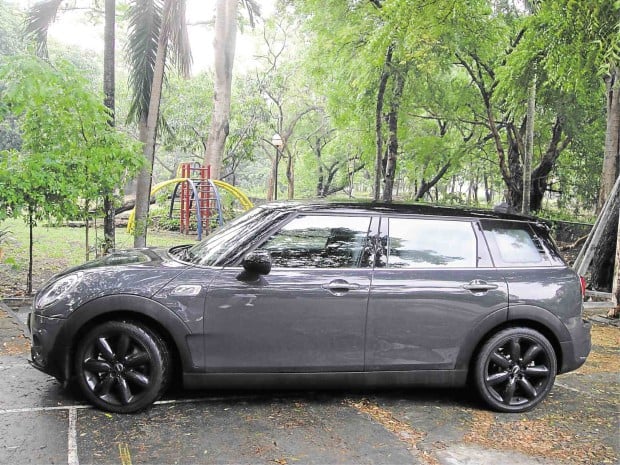 THE 2016 Clubman is the longest and widest model of the new MINI generation. Photos by Aida Sevilla-Mendoza

Introduced by MINI Cooper in 2007, the MINI Clubman is presented this year as the premium British brand’s version of the shooting brake. (See sidebar article, “What is a shooting brake?”)

The Clubman is fully redesigned for 2016 and is no longer a stretched version of the MINI Cooper hatchback.

The 2016 MINI Clubman is the largest model of the new MINI generation, being 271 mm longer and 73 mm wider than the MINI five-door while its wheelbase is 103 mm longer.

Its larger dimensions add a lot more interior space as it interprets in a contemporary way the shooting brake concept, which traditionally sports a stretched silhouette, a long roof line and a steep rear.

Being bigger, the new MINI Clubman is also heavier and theoretically, this could affect its ability to live up to its legendary sporting heritage.

But I discovered, at the wheel of an S Clubman, that despite its new dimensions, the 2.0-liter, four-cylinder Twin Power Turbo-charged direct injection, Valvetronic 192-horsepower engine could outpace a 2.5-liter turbo four-cylinder, 305-HP Subaru WRX STI on a highway with some traffic. 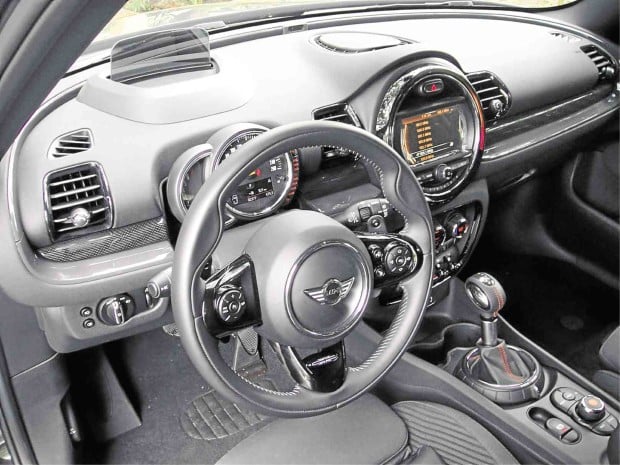 MINI Cooper engines, after all, are manufactured by BMW, which revitalized the brand in 2002. In fact, the Clubman reportedly shares the same platform as the BMW 2 Series Active Tourer.

The S Clubman powerplant, mated to a new eight-speed sports automatic transmission with shift paddles, produces 280 Newton-meters max torque that can be briefly increased to 300 Nm via an overboost function.

Zero to 100 kilometers per hour takes only 7.1 seconds with a launch control function for traction-optimized acceleration.

The eight-speed automatic transmission shifts up and down almost instantaneously for sporty shifting when accelerating and increased comfort when shifting down. 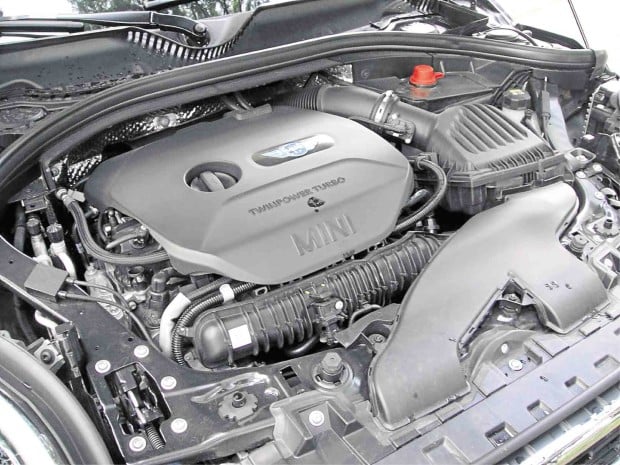 This large MINI’s low center of gravity provides the same road-holding grip as its smaller siblings despite its heavier curb weight.

Caroming around corners, the Clubman stays low and flat.

The brakes are responsive and firm with minimal dive under heavy braking.

While the new Clubman retains the brand’s legendary go-kart handling characteristic, it is practical due to its four-door design.

But it still projects the same quirky MINI charm found in other models, what with the bulbous headlamps surrounded by chrome, hexagonal grille, arched power dome over the engine compartment, rounded front fascia, low roofline, double door rear opening and round side mirrors.

What’s new in the exterior are air curtains in the outer sections of the lower air inlet and air breathers in the rear section of the side panels that optimize air ducting and with the roof spoiler, help to reduce aerodynamic drag. 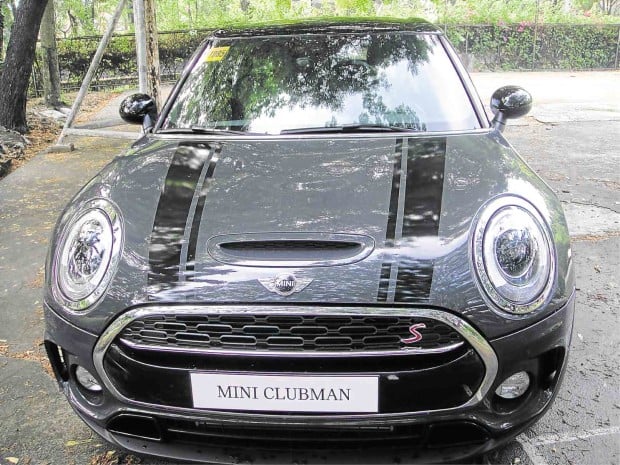 Inside, the traditional MINI quirks are tuned down although the toggle switches and the massive circle in the middle of the dash remain, only this time it is a LED ring surrounding the infotainment screen.

The LED ring changes color, turning green when you use the Eco driving mode, and red when you switch to Sport mode. For normal driving, a Mid mode is available.

A head-up display in the upper area of the instrument panel between the windshield and steering wheel projects driving-related information, but the driver has to be tall enough to be able to read it.

The front seats are manually height-adjustable, comfy and supportive. The driver’s seat position offers an excellent view forward but rearward visibility is blocked by the headrests.

Legroom in the back is excellent due to the sculpted seatbacks of the front seats, although the sloping roofline may cause headroom problems for passengers taller than 6 feet.

The backseat comfortably accommodates two adults, but three would be crowding it. The seat backrest splits 40:20:20 and can be folded down to increase luggage space from 360 to 1,250 liters. 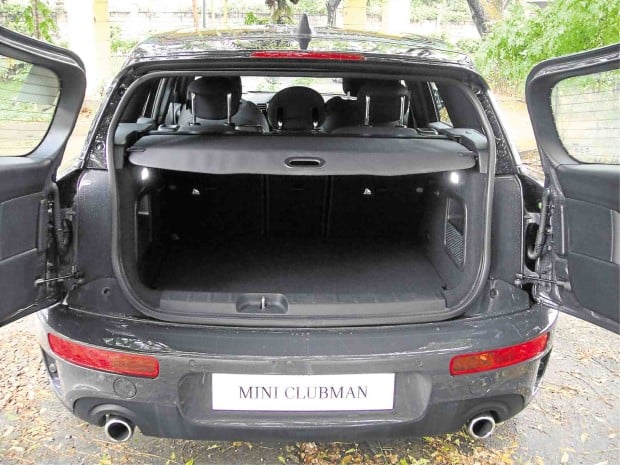 REAR split doors open sideways to luggage space that can be expanded to 1,250 liters.

You access the luggage compartment by opening a pair of wing doors using a dual-section door handle finished in chrome.

Summing up, by reinterpreting the shooting brake concept to improve interior room and practicality while adding new features in driveability, suspension comfort, safety, controls and connectivity, the 2016 MINI Clubman makes a case for itself as a family car with sporting intentions.

At the same time as it advances to the premium compact level, the new MINI Clubman retains its distinctive style and character, high-quality cabin, nimble handling around turns, and enough scoot to make its enthusiastic driver happy.

The 2016 MINI Clubman is offered in three variants, including the Cooper Clubman (P2.7 million) and the Cooper S Clubman (P3.2 million).