Volkswagen’s fully-electric ID.3 will make its world premiere at the Frankfurt Motor Show, also known as the Internationale Automobil-Ausstellung. 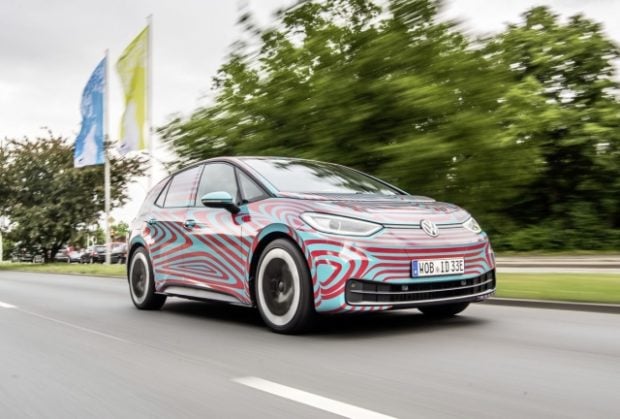 Volkswagen’s fully electric ID.3 is scheduled to make its world premiere at this year’s Internationale Automobil-Ausstellung. Image: Courtesy of Volkswagen via AFP Relaxnews

Despite Volkswagen opening pre-booking for the ID.3 back in May, the electric vehicle (EV) built on the Modular Electrification Toolkit (MEB) platform has yet to have its vaporwave wraps taken off.

Nevertheless, over 10,000 registrations were made during the first 24 hours they were opened. Those clients will finally get a look at what the model looks like sans camouflage on Sept. 10.

The company equates the ID.3 with the Beetle and Golf models because of its representation of the “third major chapter of strategic importance for the history of the Volkswagen brand.”

When it launches, the EV will be available with three battery configurations: 77 kilowatt-hour, 58 kilowatt-hour and 45 kilowatt-hour with ranges spanning between 330 and 550 kilometers. The base model will have a starting price of 30,000 euros (almost $33,000 or over P1.7 million).

Production of the model is expected to begin at the end of this year with deliveries starting in mid-2020. RGA/JB

Volkswagen to reinvent itself as young and hip

Volkswagen shows how it helps drivers scan the road ahead